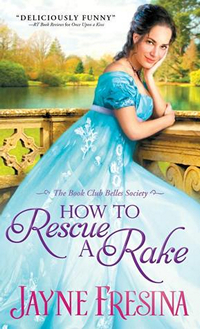 Jayne’s third book in her Book Club Belles series, How to Rescue a Rake, has just been published by Sourcebooks Casablanca.

Inspired by Jane Austen’s Persuasion, this new Regency romance features heroine Diana Makepiece whose life and troubles resemble Austen’s Anne Elliot in many respects. Here is a description of the book from the publisher:

Nathaniel Sherringham has returned to Hawcombe Prior a changed man. Gone is the reckless rake who went out on a limb to propose to Diana Makepiece three years ago. Now Nate’s mysterious new wealth has the town’s rumor mill spinning. To stir things up (and get Diana’s attention), Nate boldly announces his plans to marry “any suitable girl” under the age of 25.

Diana, now 27 and still single, is acutely aware of Nate’s return. When her mother suggests a trip to visit a cousin in Bath, Diana leaps at the chance to escape the heartbreak and regret she can’t help but feel in Nate’s presence…and avoid his irritating charade to find a bride.

But for Nate, Diana has always been the one. He might just have to follow her to Bath and once again lay his heart on the line to win her attention-and her heart.

Here to tell us more about her inspiration for the Book Club Belles series, and her love of Jane Austen is author Jayne Fresina.

TAKING A LEAF OUT OF JANE’S BOOK…

I have been an Austen fan since I first read Pride and Prejudice when I was fifteen. It was a recommendation by my English Literature teacher at school because a BBC production had just started airing on Sunday evening TV and she suggested we might want to read the book too.

It was love at first read.

After that, I worked my way through each of her books, greedily absorbing every word (checking the dictionary for a few of them) and learning about that strange world of manners and morals, balls and carriage rides, parasols, and fine prospects. It was wonderful to escape from the dreariness of this teenager’s life, in a cold, rainy Northern England town in the 1980s. So I owe a huge debt of thanks to that teacher — Ms. Jones — who, with her big shiny glasses and bubbling enthusiasm for all things Austen, made me a convert.

Many years later, when I finally became a published author, I flirted with the idea of writing another version of Pride and Prejudice, but there were a lot of other authors who had the same idea and the results were not always well-received. Was there room for yet another Austen-inspired book? Was it superfluous? Were people tired of all that?

I didn’t want to upset Austen fans, of course, by doing anything that might be seen as insulting to Jane or her characters. (“Are the shades of Pemberley to be thus polluted?” – Lady Catherine de Bourgh squawks in my ear) But I really wanted to create a tribute of my own to Jane and her stories. I kept putting it off, but the idea always crept back in, poking away at me. It’s a very dodgy business taking on something like that and I spent quite a long time deciding how I might do it in a way that would add to the story, not just purloin the plot or the characters.

Finally, as I was reading an Austen biography one day and looking at a sketch of a Regency-era lending library, I came up with the idea of a Book Society – a small group of young ladies reading Austen’s works when they were first published. Wouldn’t it be fun, I thought if their lives begin to follow the plot of whichever book they are reading? They certainly had more chance of meeting a “real” Captain Wentworth, Mr. Darcy or Colonel Brandon than anyone living today.

For one thing, men just don’t dress that way today. Sigh! Not since Elvis has there been a man who could carry off a good sideburn!

I sent the series proposal to my editor at Sourcebooks and she loved it. And so the idea for the Book Club Belles was born. Justina and Catherine Penny, Diana Makepiece, Lucy Bridges and Rebecca Sherringham were soon sketched out in my mind and then filled out on paper. As young ladies living in Austen’s time, her books are a form of escape for them too, just as they once were for me — and as they continue to be for so many readers, old fans and new.

I thought it was important that the books have a sense of humor, so I kept them light-hearted and not too “angsty”. As I wrote I was very conscious of staying as true to the period as possible. The ladies of my book society, however, are considerably more rebellious and daring than Miss Austen’s heroines — a sign of these times, I’m afraid. Hopefully, Jane can forgive me for that!

After all, Mr. Darcy is now remembered by many as Colin Firth walking out of his lake in a rather fabulous wet shirt— a state of undress in which the real Mr. Fitzwilliam Darcy would never be caught. Whenever I watch that scene (drool over it, maybe more accurate), I wonder what Jane Austen would think of all this— of how beloved her characters have become to so many generations of readers (and watchers now too). What would she think of all these TV adaptations and movies? What would she make of all these books influenced by her work?

I can’t help thinking she’d be laughing. Once she got over the shock of Mr. Darcy’s impromptu swim and delightfully bedraggled wet curls.

Yes, it’s a chancy business taking on the work of an author like Jane Austen and giving the story a new twist, but I think she would agree that, if a little fresh treatment brings more readers to her books and introduces them to that wonderful world, all the better! 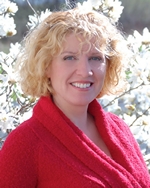 Jayne Fresina sprouted up in England. Entertained by her father’s colorful tales of growing up in the countryside, and surrounded by opinionated sisters, she’s always had inspiration for her beleaguered heroes and unstoppable heroines. She lives in upstate New York. Learn more about the author at www.jaynefresinaromanceauthor.blogspot.com, follower her on Facebook as Jayne Fresina and on Twitter as @JayneFresina.

21 thoughts on “A Preview of How to Rescue a Rake, by Jayne Fresina”