It is a rare delight in reading to discover a new author that you feel could become one of your most cherished favorites. When “every feature works,” I am revved up and ready to share my excitement.

Such is the case with Patrice Kindl, who until a review copy of A School for Brides landed on my doorstep last month was entirely unknown to me. Further research revealed that this new release was a companion novel to her first in the Lesser Hoo series, Keeping the Castle. Set in the Regency period both novels share many of the same characters, paralleling the same time frame, but from a different perspective. Better and better.

Before diving into A School for Brides I decided to power through an audio recording of Keeping the Castle. It knocked my bonnet off. If I could describe Kindl’s writing in one sentence, I would say that it is a skillful blending of Jane Austen’s genius with social satire, Georgette Heyer’s exuberant humor and Dodie Smith’s poignant romance.

Here is a description of A School for Brides from the publisher:

The Winthrop Hopkins Female Academy of Lesser Hoo, Yorkshire, has one goal: to train its students in the feminine arts with an eye toward getting them married off. This year, there are five girls of marriageable age. There’s only one problem: the school is in the middle of nowhere, and there are no men. Set in the same English town as Keeping the Castle, and featuring a few of the same characters, here’s the kind of witty tribute to the classic Regency novel that could only come from the pen of Patrice Kindl!

Curious to learn more about Patrice Kindl and the inspiration for her Lesser Hoo novels I asked her if she would be game for a brief interview. Happily, she agreed.

LAN: Do you consider Jane Austen to be an influence on your writing?

PK: Ah, the divine Miss Jane Austen!  Was she an influence?  Of course.  I had nearly memorized the six novels by the time I was twenty-one, and in the following years re-read them all, as well as collections of her letters, continuations of the two incomplete manuscripts, re-imaginings of her published works, biographies, books about her life and times … in short, I was and am a devoted admirer.  I doubt that many authors set novels in this brief historical era without being fans.

LAN: Which of Austen’s novels is your favorite?

PK: Asking a reader which of Austen’s novels is their favorite probably amounts to asking which has their favorite protagonist.  Poor Fanny Price, the main character of Mansfield Park!  She must be the least liked of Austen’s heroines today.  But she was possibly more acceptable to the readers of the early 19th century than much-beloved Elizabeth Bennet.  In those days meek and mild women were regarded far more approvingly than they are today.

Reading Mansfield Park myself, my sympathies mostly lay with Mary, the sister of Henry Crawford.  Her worldly nature and disrespect toward the church are often seen as negating her many generous feelings and attractive qualities; by the end of the novel she is considered not much better than her shallow and selfish brother. However, I rather saw her as the dark side of Elizabeth Bennett, a clever and adventurous young woman whose wit and independence of spirit led her to cross a line that made her unforgivable in the early 1800s.

However, my favorite novel, and heroine, is Emma.  Yes, of course, I love Elizabeth – who doesn’t? – but Emma is so self-satisfied to begin with and, in the end, so willing to take her humbling with humor and grace.  Emma is to some extent a sex reversal of Pride and Prejudice.  Emma takes the place of Darcy as the person who is too enamored of their own importance to be capable (at least to begin with) of loving another person with a whole heart.

LAN: What was your inspiration for Keeping the Castle and its companion, A School for Brides? 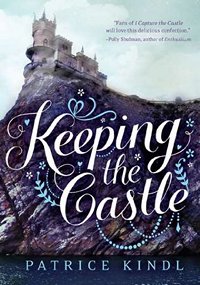 PK: Keeping the Castle and A School for Brides were my response to modern historical novels set in the nineteenth century. Too many of them depict young women who are dismissive of marriage and anxious to pursue a career.  While I understand the urge to thus revise history – I am a feminist myself – it is inaccurate.  The number of women who were self-supporting in any field beyond education or domestic service was vanishingly small. Jane Austen herself could not have lived on her literary earnings.  Marriage was the best ‘career’ a lady could hope for, not only financially, but in social status, security in old age and, for most, personal happiness.  True, your husband could, with legal and moral impunity, beat you black and blue, carouse with other women and rob you blind, but … at least you weren’t an old maid.

Austen’s Emma insists that a “single woman, of good fortune, is always respectable, and may be as sensible and pleasant as any body else,” but she was in the very rare situation of being independently wealthy, with no interfering male relative to take control of the money. Her friend Harriet shows a proper horror at the idea of going to the grave unmarried.  And as for the scholastic profession, well … the dread that Jane Fairfax felt about taking a governess position should make it clear that being a teacher was only marginally better than starving in the gutter.

So, with A School for Brides and Keeping the Castle, I wanted to show that yes, of course the young women of that era were interested in marriage.  Being aware of the economics of their age, they couldn’t afford not to be.  Pooh-poohing Regency novels as merely being about romance makes as much sense as looking down on a classic mystery novel for merely being about crime.  The decade of a woman’s life between fifteen and twenty-five was her one shot at happiness – there were almost no second chances – and the route to happiness usually led through matrimony. Romance novels set in the past are only trivial if you consider the lives of women to be unimportant.

AUTHOR BIO: In addition to A School for Brides and Keeping the Castle, Patrice Kindl is the author of four other novels, the best known of which is the acclaimed Owl in Love. She lives with her husband and a variety of animals in upstate New York. Visit her online at www.patricekindl.com or connect with her on Twitter at @patricekindl.

Thank you for joining us here today at Austenprose, Patrice.

I hope that many of our readers will also discover what a treasure your writing is. We will be reviewing A School for Brides on August 14th, so please check back to discover our thoughts.

Enter a chance to win one of three hardcover copies available of A School for Brides, by Patrice Kindl. Just leave a comment stating what intrigues you about this new novel, or if you have read Keeping the Castle, who is your favorite character and why, by 11:59 pm PT on Wednesday, August 05, 2015. The three winners will be drawn at random from the comments and the winners announced on Thursday, August 06, 2015. Shipment to US addresses only. Good luck to all!

39 thoughts on “Q&A with Patrice Kindl, Author of A School For Brides, & Giveaway”