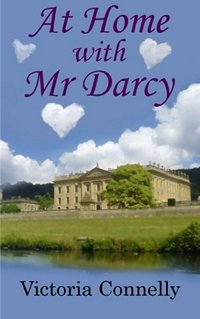 The Austen Addicts are back!

With Katherine and Warwick, Robyn, Doris Norris and the rest of the gang, it’s going to be a trip to remember. But then a hardened journalist and non-Janeite, Melissa Berry, joins the party. Fearing a stitch-up, the friends rally together, hoping to convince Melissa that the only way is Austen…

At Home with Mr Darcy is the sixth title in the bestselling Austen Addicts series.

‘Chatsworth is one of England’s greatest “Treasure Houses”,’ Dame Pamela announced as the minibus came to a halt after arriving at its first Pemberley, ‘and a place I was lucky enough to call home for a summer whilst I was filming Twelfth Night.’ She paused as the minibus exploded into applause as everybody remembered the tour de force that was Dame Pamela’s Viola.

‘Pemberley was thought to be situated near Bakewell,’ she continued, ‘and many Jane Austen fans believe that Chatsworth is the house she had in mind when she was envisioning Mr Darcy’s home.’ She took a deep breath. ‘”To Pemberley, therefore, they were to go.”‘

Everybody except Melissa cheered as they remembered the line from the book, standing up from their seats and grabbing their bags and cameras.

‘This is too too exciting!’ Doris Norris exclaimed as she caught Katherine’s eye.

‘You know, Elizabeth and the Gardiners took “their Northern tour” in the month of July. So we’re here at the perfect time too,’ Katherine said.

‘Of course,’ Dame Pamela said. ‘We like to get things right, you know.’

‘Isn’t it Chatsworth on the front of the Hodder edition of Pride and Prejudice? I’m sure it is,’ Annie said, producing a copy from her handbag.

‘It looks very much like it,’ Rose said, peering at it.

Mr Allsop, the driver, cleared his throat. ‘Can I switch this off now?’ he asked.

Dame Pamela looked confused for a moment and then she realised that the Dario Marianelli soundtrack to the 2005 film adaptation was still playing.

‘Thanks heavens for that,’ he said under his breath.

Dame Pamela shot him a look of disapproval as she left the minibus.

The driver turned to look at Robyn. ‘You folks really are nuts about this Austen woman, aren’t you?’

They were to spend the entire day at Chatsworth. With the enormous house, extensive gardens and grounds as well as the restaurant, cafes and deluxe shops to be visited, there was enough to entertain any holidaymaker let alone a Janeite who needed to do nothing more than wander around with a trusty copy of Pride and Prejudice in their hands.

The group soon split up with most making a beeline for the house first. Robyn was one of them, drifting around in a dream as her eyes roamed from fine old portraits to decadent pieces of furniture. She gloried in crossing the black and white floor in the Painted Hall just as Keira Knightley had done in the 2005 adaptation and nearly screamed for joy when she saw her first view of the Emperor Fountain from one of the bevelled glass windows.

It was an enormous house with so many splendid rooms that it made Robyn feel quite dizzy. Like Elizabeth Bennet when she visited Pemberley, Robyn made sure she looked out of each window at the landscape beyond, glorying in the immaculate gardens and the countryside in which they were set.

‘”To be mistress of Pemberley might be something!”‘ she quoted to herself, remembering Elizabeth’s words as she’d thought about what her future might have been had she accepted Mr Darcy’s first proposal. Robyn smiled. How would she have reacted if Dan had revealed himself to be the master of a property like Pemberley? Would she have swooned at the thought of being its mistress? She didn’t think so. She probably would have run a mile because their home at Horseshoe Cottage was her idea of perfection. Of course, she was also lucky enough to be able to work at Purley Hall which was grand by anybody’s standards. No, she thought, as beautiful as they were, the Chatsworths and Pemberleys of the world were suited to other people – not her.

After touring the house, Katherine and Warwick found themselves walking behind Melissa Berry. She had shunned the house in favour of the gardens and was now making her way towards the stable block where the restaurant and shops were.

‘Shall I tackle her now?’ Warwick asked Katherine.

‘I don’t like your use of the word tackle,’ Katherine said. ‘It sounds like you’re going to get her in some sort of head lock.’

‘I wish I could,’ he said, ‘then maybe I could make her see reason.’

‘You haven’t got to make her see reason,’ Katherine said, ‘only the joys of Jane Austen.’

‘Isn’t that the same thing?’ Warwick asked with a lopsided smile that still melted Katherine. ‘Leave her to me. You go and buy yourself a book or something in the shop.’

Katherine laughed. ‘I don’t need any encouragement to buy books.’

They entered a wide courtyard where tables and chairs were set out and people were eating and drinking in the sunshine. There was a small fountain in the middle and a bar at the far side selling drinks and ice creams. Melissa Berry was heading towards the bar.

‘Can I get you a coffee?’ Warwick asked as he approached her.

She jumped in alarm. ‘I thought you lot would all be in the house following in the footsteps of Mr Darcy,’ she said.

They both bought coffee and went to sit in one of the bright purple seats.

‘How long have you been a journalist?’ he asked.

‘A couple of years,’ she said, sipping her coffee.

‘So you know about that?’

‘It’s my business to know about the people I write about,’ she said, her face blank and unreadable. ‘So, do you like it?’

‘I guess,’ she said and there was a pause.

‘So,’ Warwick began again after taking a sip of his coffee, ‘have you read much Jane Austen?’

‘No,’ Melissa said bluntly. ‘Just a bit of that Pride and Prejudice one and some stuff about her life in preparation for this job.’

Warwick’s left hand clenched into an angry fist under the table. A bit of that Pride and Prejudice one. She was a hopeless case, wasn’t she?

Many thanks to author Victoria Connelly for sharing this passage from her new novella, At Home with Mr. Darcy. We look forward to reading it.

Victoria Connelly was brought up in Norfolk and studied English literature at Worcester University before becoming a teacher. After getting married in a medieval castle in the Yorkshire Dales and living in London for eleven years, she moved to rural Suffolk where she lives in a 200-year old cottage with her artist husband and family of rescued animals.

Her first novel, Flights of Angels, was published in Germany and made into a film. Victoria and her husband flew out to Berlin to see it being filmed and got to be extras in it.

She has had ten novels traditionally published worldwide and seventeen titles indie published. Several of her books, including her first volume of autobiography – Escape to Mulberry Cottage – have been Kindle bestsellers. She is now working on a brand new series called The Booklovers which will launch in 2015.

One thought on “At Home with Mr. Darcy (Austen Addicts Book 6), by Victoria Connelly – Preview and Exclusive Excerpt”