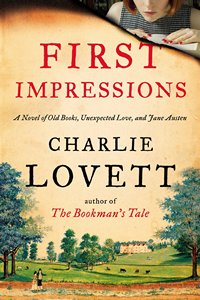 We are thrilled to welcome bestselling author Charlie Lovett to Austenprose today as guest of honor for the virtual book launch party of his new book, First Impressions: A Novel of Old Books, Unexpected Love, and Jane Austen, just released by Viking (Penguin Group USA).

This intriguing new novel combines two of my favorite genres – historical romance and contemporary mystery. It features dual heroines: English author Jane Austen while she is writing her first draft of Elinor and Marianne (later entitled Sense and Sensibility) in 1796 Hampshire and Sophie Collingwood, an antiquarian bookseller in modern day London who stumbles upon a literary mystery that casts doubt upon the true authorship of Pride and Prejudice, Jane Austen’s second published novel and her most famous work.

Mr. Lovett has generously offered a guest blog sharing his inspiration to write First Impressions—and to add to the festivities—his publisher has also offered three hardcover copies of the book in a giveaway contest. To enter, please ask Mr. Lovett a question or leave a comment following this blog post. The entry details are listed below. Good luck to all.

When I first wrote my novel The Bookman’s Tale (Viking 2013), I titled it Marginalia, which would have been a great title if the only customers were rare book librarians and literary scholars. My agent wisely suggested a change. He sold the book as The First Folio, and it ultimately became The Bookman’s Tale, but the idea of The First Folio stuck with me. If one book was titled The First Folio might my next book be titled The Second . . . something? That’s when I started thinking about the idea of a book that was worthless in its first edition but, for some reason, priceless in its second edition. Once I threw in Jane Austen, the idea for First Impressions was born. I talked to my agent about the idea very early on and he encouraged me to do two things: not write a sequel to The Bookman’s Tale, and have a female protagonist. Those two ideas are what really solidified First Impressions in my mind.

I spent several months making notes and when my wife and I were in England in the summer of 2012 I visited Steventon in Hampshire, where Jane Austen had grown up and where part of my novel would be set. I relate very strongly to place in my writing, and even though we spent less than an hour in this peaceful village, I began to see Jane there. I visited other sites associated with Jane Austen—from Bath to Winchester to Chawton—but I wanted to write about young Jane Austen, and Steventon is where she spent her formative years and where she started writing. That one hour spent basking in the quiet, looking out over the fields shimmering in the summer sun, sitting inside the cool stone church Jane had attended for all those years, provided more inspiration than a hundred hours of research possibly could.

Why Jane Austen? Well, it seems that Jane Austen was always in my house. My father, now retired, was an English Professor at Wake Forest University, and his specialty was the eighteenth century. True, Jane Austen’s novels were not published until the early nineteenth century, but her work was very much a part of his syllabus and he often talked about her. In seventh grade, I made the rather impetuous decision to read more “grown up” books in my spare time. I read Brave New World and then I moved on to Pride and Prejudice. Now I can’t tell you exactly who Jane Austen’s imagined audience was, but I’m pretty sure it wasn’t seventh grade American boys of the 1970s. To me, the novel was nothing more than a soap opera. How could my dad spend all his time with this stuff? Sadly, I let this impression of Austen guide me for the next couple of decades. I was probably in my thirties when I picked up Pride and Prejudice and gave it a second chance. The first thing that surprised me was that it was funny—really funny. And it was smart and incisive and observant. I regretted having spent so long laboring under my seventh grade misconceptions, and since then I have read Austen frequently and with much enjoyment.

When I set about writing Jane Austen as a character, I didn’t want to know too much about her. Yes, I wanted to get the facts of her life correct—where she lived, when she wrote her novels, the names of her family members—but I was creating a character in a novel. So, instead of looking to her biography to discover her personality, I looked to the novels. What kind of person, I asked myself, would write Pride and Prejudice and Sense and Sensibility? To me Jane had to be not just smart but witty, energetic, a tad irreverent, and quietly revolutionary. I did my best to make her all of this as she interacts with her fictional mentor, Richard Mansfield. I also endowed my contemporary heroine, Sophie Collingwood, who fights to save Jane’s reputation, with some of the same qualities.

I truly enjoyed spending time with these two remarkable young women, and I hope you will too. 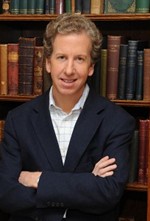 AUTHOR BIO: Charlie Lovett, author of the New York Times bestselling novel The Bookman’s Tale, is a former antiquarian bookseller who has collected books and materials related to Lewis Carroll and Alice in Wonderland for over thirty years. He has written several books on Carroll and served as president of the Lewis Carroll Society of North America. As an educator, he served for more than a decade as writer in residence at Summit School in his hometown of Winston-Salem, NC. There he wrote twenty plays for young audiences, which have been published and seen around the world in more than 3000 productions. Charlie is a member of the Grolier Club for book collectors and is currently at work curating an exhibit at Lincoln Center on “Alice in Performance” in celebration of the 150th anniversary of the publication of Alice in Wonderland. He and his wife Janice live in Winston-Salem and in Kingham, Oxfordshire. Please visit him online at his website, charlielovett.com, on Facebook as Charlie Lovett Author, and follow him on Twitter as @CharlieLovett42.

ASK MR. LOVETT A QUESTION OR LEAVE A COMMENT TO ENTER A GRAND GIVEAWAY

UPDATE 10/23 – Q&A with author Charlie Lovett has closed, but the giveaway contest

In celebration of the release of First Impressions, please enter a chance to win one of three hardcover copies available by leaving a question for Charlie Lovett or a comment sharing what intrigues you about this novel before 11:59 pm, on Wednesday, October 22, 2014. Winners will be drawn at random and announced on Thursday, October 30, 2014. Shipment is to US addresses only. Good luck to all.