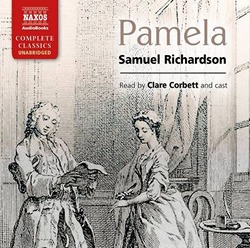 “Her knowledge of Richardson’s works was such as no one is likely again to acquire, now that the multitude and the merits of our light literature have called off the attention of readers from that great master.” – J.E. Austen-Leigh, Memoir of Jane Austen, Chapter 5

Listed among Jane Austen’s most beloved authors is the rebellious printer-turned-novelist Samuel Richardson, creator of such potboilers as Pamela, or Virtue Rewarded (1740). The novel opens at the death of Pamela Andrew’s employer, the woman who has educated her to be as accomplished as any young woman could hope to be, by eighteenth-century standards. And from there commences a rather strange and disturbing plot in which Pamela must fend off the unwanted advances of her new male employer—and I’m not simply talking about sexual harassment, which would have been bad enough; I’m talking about the outright attempted rape. Indeed, the main dramatic question of the novel is whether Pamela will forfeit her honor (read “her virginity”) for the sake of wealth and safety, or will she display a heroic level of Christian virtue, and risk the possibility of public disgrace. Spoiler Alert: the novel’s subtitle gives the answer away from the start.

Although this novel is incredibly didactic, overly sentimental, and downright maudlin, it does have its high points—one being the character of Pamela herself. She may be pretty and sugary sweet, and sound like a flaky saint most of the time,  she’s also fantastically brave and sassy. Indeed, the best scenes in the book are those in which Pamela wages verbal war against her oppressors. When, for example, Mr. B. has attempted his first physical assault against her and then dares to chide her for speaking back to him, Pamela exclaims, “Well may I forget that I am your Servant when you forget what belongs to a Master.” (23). This rebuttal underscores the novel’s major theme regarding the equality of all people based on moral education.

Indeed, Richardson is rather scathing of the corruption of England’s upper class, especially as regards the treatment of the lower classes. He has Pamela write: “…proud People never think what a short Stage Life is; and that, with all their Vanity, a Time is coming, when they shall be obliged to submit to be on a Level with us; and true said the Philosopher, when he looked upon the Skull of a King, and that of a poor Man, that he saw no Difference between them.” (258). She further argues that even the claims the gentry make to noble birth are spurious, given that if family lines were traced back far enough, or if the future could be seen, it is clear that social rank fluctuates; the noble families of today are the serfs of tomorrow and vice versa (think Kate Middleton). It is the way Richardson wrestles with social questions about rank and gender that make this novel so valuable and interesting. Yes, it’s didactic, but sometimes in all the right ways.

That said, what I loved most about this novel was speculating on the ways it may have inspired Pride and Prejudice. Firstly, I thought Mr. B. was a combination of Mr. Darcy and Mr. Wickham. Like Wickham, Mr. B. plays with the affections of young women, preying on them. But like Mr. Darcy, Mr. B. is actually a generous young man who wants to be good, and who is capable of recognizing the good in others, even if their social status was below his own. Also like Darcy, Mr. B. braves the censure of society to love where he wills, despite having an interfering relative determined to marry him off to another. Lady Barbara Danvers, Mr. B.’s sister, attacks Pamela’s marriage to her brother and is so vicious she makes Lady Catherine’s attack on Elizabeth in Pride and Prejudice look like tea time with the queen. Of course, for both Pamela and Elizabeth the problem is that they are intelligent, beautiful, moral women who happen to be of “inferior birth;” and Georgian England, Christian though it was, valued money above goodness. Fortunately for both heroines, the voice of society is no match for their wit, honesty, and good sense. Indeed, Mr. B. confesses, “How then, with the Distance between us, and in the World’s Judgment, can I think of making you, my Wife? —Yet I must have you; I cannot bear the Thoughts of any other Man supplanting me in your Affections.” (213). I can just imagine the young Jane Austen reading and loving these words, turning them over and over again in her mind until she felt compelled to create a hero—albeit a morally superior one—who could also say such a thing to a woman and mean it.

Richardson’s novels might also have inspired Austen in other ways, not only in terms of plot, but in terms of form. Pride and Prejudice and Sense and Sensibility were both originally composed as epistolary narratives, that is, as a series of letters, but she thought better of this later, and substantially revised the two novels. Perhaps she felt the form too restricting, as it can seriously limit the ways in which plot information can be revealed, besides necessitating a physical distance between the principal correspondents.  Even so, Austen’s Lady Susan is a fine example of a novel in letters. Interestingly, it, like Pamela, also features a roguish aristocrat and a virtuous damsel—though, in this case, they are mother and daughter.

Granted, I found this novel’s lack of variety in the plot, despite its being 503 pages long, to be trying, but I have to award it five stars just the same, for its hilarious banter alone. I highly recommend that those brave enough to take it on should do so with the help of Naxos’ excellent audiobook recording, starring Clare Corbett as the voice of Pamela. It draws readers in from the first letter and clarifies and enlivens a sometimes tedious text. With Naxos, even busy readers may take the drama wherever they go—in the car, at the gym, or even soaking in a tub on a snowy winter’s night.