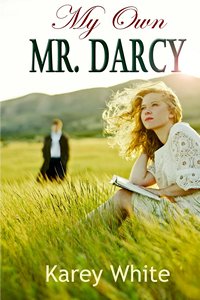 How often do we envision the partner we will (hopefully) spend the rest of our lives with? What will he/she look like? For those of us who have read Pride and Prejudice, I’m sure Mr. Darcy has played a part in those visions. Anyone fortunate enough to have seen the 2005 film adaptation of Pride and Prejudice knows Matthew Macfadyen’s portrayal of Darcy is a good place to start (I’m a Colin Firth girl myself though!) When I heard that Karey White had written a book about the pursuit of a perfect Mr. Darcy a la the wonderful 2005 film adaptation, I figured I had to give it a try.  My Own Mr. Darcy is the title, and it is an interesting idea to say the least.

Elizabeth has seen the man she wants to have for the rest of her life. The only problem is that he is Matthew Macfadyen as Mr. Darcy in the 2005 version of Pride and Prejudice. After Elizabeth first glimpses Macfadyen when she watches the movie with her mother, she vows to never date another man until she finds one that matches her idealistic views. However, this seems to do her more harm than good, as six years pass without Elizabeth going on a single date. Finally, Elizabeth is convinced by her roommate to attempt ten dates with a man named Chad. Although she finds the idea revolting, she soon finds that Chad is kind and down to earth. As a school science teacher and swim coach, Chad is not the kind of guy that Elizabeth envisioned herself dating. However, while dating Chad, she meets Matt Dawson, a wealthy bookstore owner who appears to be everything she saw in Mr. Darcy from the beginning. However, as she gets to know Matt, she finds that what she originally wanted in a man may have been wrong from the beginning. Will Chad’s nondescript background be enough to sway Elizabeth from the dazzling Matt Dawson?

I think that contemporary novels inspired by Austen’s works are my favorite works to read in the sphere of Jane Austen fan fiction. I’m always curious to see how authors will modernize Austen’s storylines or characters, or how their story will be influenced by Austen. I was really impressed with the way White’s story was influenced. The idea of holding out for the perfect man (aka Mr. Darcy) is something I’m sure many women have done. I give White a lot of credit for also pushing forth the idea that sometimes the idea of what is perfect for us is actually disastrous. So many times books that focus on relationships about idealistic men or women in larger-than-life scenarios directly impact what we want and wish for in real life. Elizabeth is a perfect example of what perfectionistic romances can do to a woman! White gets two thumbs up from me for writing romance with a realistic approach.

White’s storytelling and writing was effective, flowed easily from page to page, and was thoroughly enjoyable as a whole. My one complaint is that I would have liked to have seen a longer conclusion to the novel. We worked up this conflict between Elizabeth, Matt, and Chad for most of the book only to have it resolve too quickly and be done with. I’m a reader that enjoys the building of a good conflict as well as a de-escalation after the resolution (I like dessert with my dinner!) Regardless of the short ending, this book makes a perfect companion to a cold day. With a warm cup of cocoa and blanket, you’ll fall in love with these characters just as much as I did.