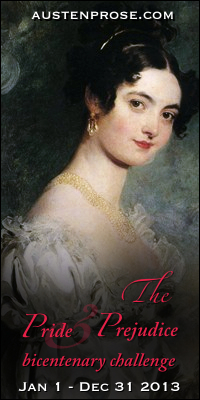 This is our ninth selection for The Pride and Prejudice Bicentenary Challenge 2013, our year-long event honoring Jane Austen’s second published novel. Please follow the link above to read all the details of this reading and viewing challenge. Sign up’s are now closed for new participants, but you can join us in reading all the great reviews and comments until December 31, 2013. Since I am traveling in England on a Jane Austen Tour, Christina Boyd is pinch-hitting for me in my absence and offers this great review of a classic Pride and Prejudice sequel.

Author Linda Berdoll’s first novel in her continuation of Jane Austen’s Pride and Prejudice was originally self-published in 1999 as The Bar Sinister. This reviewer, however, discovered her work in 2006, after Sourcebooks had re-published it under the new title (in 2004) Mr. Darcy Takes A Wife. Mind, I had only discovered the world of fan-fiction and life after Pride & Prejudice through the elegant writing of Pamela Aiden’s Fitzwilliam Darcy, Gentleman… and had no idea what to expect from this madcap, puckish sequel that opens as Mr. & Mrs. Darcy embark on married life and harkens back to the impassioned moments reined in during their engagement. Nevertheless, not until after their ardent wedding night do they discover how truly well-matched they are for one another. However, it’s Berdoll’s explicit voyeurism into the Darcy’s enthusiastic and abundant love-making that many devoted Austen readers have taken offense to, thus, separating readers into two camps: those that fervently love Berdoll’s work and those that vehemently hate it. (Note: as I have stated previously in other Berdoll reviews here at Austenprose, I am clearly on Team Berdoll.)

Contrary to the gossips, there is more to this landmark work of fan-fiction than numerous amorous seductions and copious conjugal proclivities between two of the literary world’s most beloved couple. Several emotive subplots, almost straight from Austen’s masterpiece, whilst others entirely of Berdoll’s contrivance, create a believable verve after Pride & Prejudice. As the newly married Elizabeth Darcy establishes herself as mistress of Pemberley, she soon comprehends there is much to learn about her new role and the great estate she now holds dominion over, second only to her husband who she suspects might very well have an astonishing, yet furtive past. He had exposed this flaw to the very person whose admiration he most desired. Upon this internal revelation, his countenance reflected repentance. p. 115. As much as she did not relish the topic of his past prior to their marriage, she is determined to know it all, what with her suspicions of Darcy possibly fathering an illegitimate son. But some secrets might better be left undisturbed. 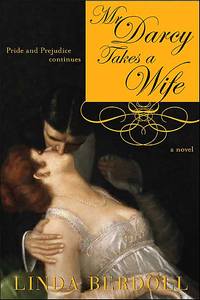 As agreeable as her own marriage bed maybe, her profusely fertile sister Jane still wonders what all the fuss is about and despite Elizabeth’s contradiction, believes obliging her husband “’tis a woman’s lot.” Notwithstanding Darcy and Elizabeth’s fervent dedication to the production of a Darcy heir, their efforts fail to yield. In addition, a ruthless servant becomes obsessed with having Elizabeth for himself; savagely stealing her away and only Darcy can rescue her. The roaring panic in Elizabeth’s head almost drowned out the sound of the door as it was kicked open and smashed against the wall.  But it startled Reed, who looked thither from attempting to pintle Mrs. Darcy, to be greeted by the unthinkable harrowing sight of Mr. Darcy himself. And he did not appear to be in a forgiving mood. p. 201

This 465 page Pride & Prejudice continuation, fraught with euphemisms of the burlesque, quick-witted dialogue of our Austen favorites as well as a cast of new characters surrounding those we know so well, was a pioneering fete in 1999, even 2004 for that matter, selling well over 350,000 copies as well as the subsequent offerings in Darcy & Elizabeth, Nights & Days at Pemberley, and The Ruling Passion, Pride & Prejudice Continues. Since then, many writers have plunged into the publishing waters of this Pride & Prejudice historical romance genre (more specifically of a pulsing, bodice-ripping nature) so I cannot but wonder if Berdoll’s work has become any less an abomination amongst the haters. She has even been included in the recently published Among the Janeites: A Journey Through The World of Jane Austen Fandom by Deborah Yaffe (of which I favorably refer to as “Who’s Who Among Janeites.”) Actually, Yaffe devotes an entire chapter to Linda Berdoll & Pamela Aiden’s pioneering efforts!

“The happy couple made love at the drop of a bonnet—in a carriage clopping along the road to Pemberley, atop a Chippendale dining table, in a forested glad on the grounds of the estate. And Linda, whose research had uncovered a vast number of Regency euphemisms, entertained herself by using a different one (‘love torch,” “timbered appendage,’ “Larydoodle”) every time she needed to mention the male member. Her book wasn’t a joke—she cared about her characters’ experiences and relationships—but she had a sense of humor about the whole enterprise.” Deborah Yaffe, Among the Janeites (2013)

My own remembrances of the past upon first reading Mr. Darcy Takes a Wife: my freshly minted Janeite eyes wide open, tentatively turning pages at first, then laughing heartily at Berdoll’s quirky word-choices, ribald descriptions, and later, breathless with anticipation as the authoress laid out her tale, and finally my thirst for more (Darcy) was satiated as the wholly pleasurable and poignant story unfolded. Albeit not as satisfied as Mrs. Darcy, of course. So naturally, I had to read the whole thing again!

Even during times like this, of self- publication and on-line fan fiction, when there is a plethora of Austen sequels, adaptations, re-imaginings, films both serious and campy, Mr. Darcy Takes a Wife is still incomparable! In my experience, one can never have too much Darcy & Elizabeth.

Christina Boyd wears many hats as she is an editor, a contributor to Austenprose, and a ceramicist. A life member of Jane Austen Society of North America, Christina lives in the wilds of the Pacific Northwest with her dear Mr. B, two busy teenagers, and a retriever named BiBi. Visiting Jane Austen's England was made possible by actor Henry Cavill when she won the Omaze experience to meet him in the spring of 2017 on the London Eye. True story. You can Google it. View all posts by Christina Boyd

63 thoughts on “Mr. Darcy Takes a Wife: Pride and Prejudice Continues, by Linda Berdoll – A Review”