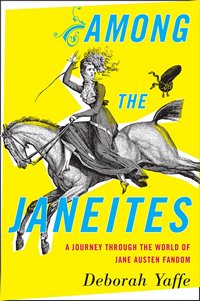 There are Trekkies and Potterheads and Twifans, but nothing in the pop culture universe can compare to the passion, dedication, and eccentricity of a Janeite. I know this because I am one.

For the benefit of the un-indoctrinated, a Janeite is a fan of English author Jane Austen (1775-1817) who wrote six novels before her untimely death at age 41. Many have read Pride and Prejudice for a school assignment and then moved on. Others, like myself and former journalist Deborah Yaffe, were so enchanted by her humor, characters, and Regency world that we read not only her major works but everything she wrote: juvenilia, minor works, novella, fragments, and letters. That was not enough. We were compelled to become her fans.

In Among the Janeites, a new nonfiction book to be released next week by Mariner Books, Yaffe boldly ventures into the land of Janeites to discover what makes them tick and why they

“…feel an intensely personal affection for the writer and her books…whom they often call “Jane,” as if she were a neighbor whose kitchen door they could knock on to borrow a cup of sugar.”

Yaffe’s journalist background gives her the perfect training for such a task, striving to form an impression of what it is like to live with the obsession and “tease out some common threads that weave this diverse array of individuals into a community.” And tease she does, interviewing and meeting a wide range of her fans, traveling to England for a Jane Austen pilgrimage to her homes and haunts, and attending Jane Austen Society of North America (JASNA) Annual General Meetings in Portland, Oregon and Fort Worth, Texas.

After the lively introduction which explores her motivations for writing the book, it is broken down into three parts, much like the dramatic structure of Austen’s three-volume novels. Within the ten chapters, one or two different personalities in the Janeite world are featured as an example of the diversity of Austen’s fans and how they express their passion. First, we meet Regency fashion aficionados Baronda Bradley and seamstress Maureen O’Connor and learn all about corsets, pelisses and the lives of these two fashionistas. Multimillionaire Cisco founder and Chawton House Library creator Sandy Lerner has her share of the conversation in a chapter called “Sandy’s Pemberley,” writers Pamela Aidan and Linda Berdol are included in the chapter on Jane Austen fanfiction, and Austen scholar Devoney Looser rattles the ivory tower of academia by admitting to Austen fandom and expressing it with the roller derby persona “Stone Cold Austen” in “The Knowledge Business.”

While many of the chapters contain a combination of personalities, “The Jane Austen Code” contains only one: the unique and outspoken Arnie Perlstein, whose way-out theories on the “shadow stories” within Austen’s novels (an underpinning of subtext to sex, hidden pregnancies, and other sordid tidbits) litter Austen’s narrative. We understand. Who else could Yaffe possibly pair with such a character? In “Austen Therapy” we meet Christine Shih and Phyllis Ferguson Bottomer who are proponents of using Austen to help borderline personality disorder and autistic patients, then we learn about the creation of JASNA by founders Joan Austen Leigh and Jack Grey in “Talking Jane Austen,” and relive the creation of the Republic of Pemberley, the online haven for Austen addicts, with co-founders Myretta Robens and Amy Bellinger in “Austen.net.” The book’s denouement culminates at the 2011 JASNA Annual General Meeting in Fort Worth where the newly corseted author attends scholarly talks, shops in the Regency Emporium and exhibits her new frock while dancing to Mr. Beveridge’s Maggot.

“Janeites are rational people, perfectly capable of drawing firm lines between fiction and reality, and yet that distinction seems to melt into insignificance when they begin thinking about Jane Austen’s characters.” p. xxi

And think we do…and have our share of the conversation…and express our decided opinions in so many diverse ways. Like Austen and her finely drawn characters, Yaffe has chosen her cast of players in Among the Janeites so well. There are your Mr. Darcy-like heroes and Elizabeth Bennet-like feisty heroines, but there are also many poignant stories of individuals that make this book so much more than an opportunity to be Mrs. Elton name dropping and rubbing the right elbows. Yaffe is a talented writer whose lively eye and measured humor permeates like brandy in this Austen trifle cutting through the thick cloying cream. We are served up all of the quirks and eccentricities of what comes with obsessive fandom yet she never chides or looks down her nose at any faction. Her wit and humor really shine.

In the second chapter entitled “Walking Where Jane Walked” she ventures on an Austen tour to England. Here we experience first-hand her observational skills and dry wit as she describes her reactions to the sites and people she meets in London, Lyme Regis, Bath, Chawton and Winchester, where Austen died and was buried in the great cathedral. As their group assembles for a solemn graveside ceremony conducted by an Anglican priest, JASNA president Iris Lutz hands each of the group a thornless (irony here) pink rose to be placed in a vase on a nearby wall. She was not moved, at all, feeling too crowded for reflection.

HA! Good question. You will have more than a passing notion after you finish this exploration of how Janeites are born and express their passion.

If you don’t blink while reading page 195, you might catch a few words about me. No, I am not as obsessive as those Janeites given a full chapter. I have just spent thousands and thousands of hours chatting in person and online message boards, reading everything about Austen or inspired by her in print, creating, writing and managing a blog for over five years dedicated to her, editing a short story collection inspired by her, and, collecting anything that suits my fancy from the great big Jane Austen brand out there. Nope. Not quirky, eccentric, or interesting enough (I guess) to warrant much more. ;-) I will, however, concede that the competition is very stiff. I am not a bazillionaire who can buy the crumbling Chawton House and resurrect it into a library, nor am I an Austen scholar moonlighting as a roller derby queen named “Stone Cold Austen”, nor do I have 30 Regency frocks and an unmentionable number of bonnets, gloves, parasols, and corsets tucked away in my tiny Woodston Cottage closet. I am just your average run-of-the-mill Janeite who proudly wears her JASNA Life Member pin and can be called one of the tribe.

Among the Janeites is a delightfully entertaining and perceptive romp with Jane Austen’s disciples. I laughed so hard I startled my cat, dropped a stitch in my knitting and turned over my cup of Captain Wentworth tea. Anyone who is amused by sub-culture insights and the human propensity for healthy (and not so) admiration/addiction will find themselves turning off their Candy Crush Saga game or the umpteenth viewing of Downton Abbey and reading into the wee hours of the night. Yaffe is as an astute observer of human nature and its intricacies as the great master herself.

13 thoughts on “Among the Janeites: A Journey Through the World of Jane Austen Fandom, by Deborah Yaffe – A Review”