There are only 8 videos this week of The Lizzie Bennet Diaries, but they are packed full of important information and plot developments. Here are some of the highlights and my take on them from these episodes.

Gigi Darcy, played by Allison Paige, is a pretty big departure from her character in Pride and Prejudice. In the novel Georgiana is EXTREMELY shy. In the LBD Gigi isn’t shy at all. She is fun and outgoing, even if a little inexperienced.  She becomes a tour guide for the day to show Lizzie around and then seems to be confused by the fact that she can’t leave a school group roaming around Pemberley Digital by themselves. Yet it is clear that she likes Lizzie and wants to be friends with her. I love that Gigi seeks out Lizzie and watches her videos. Lizzie is a little hesitant about Gigi since she is Darcy’s sister, but the two do get along well from the very beginning. 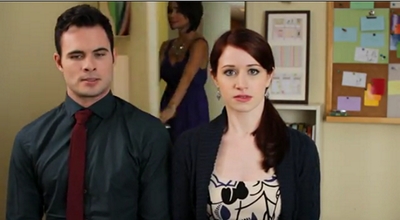 I am biased, but this is my favorite video in the series. The meeting at Pemberley is one my favorite chapters in the novel also because that scene is so perfectly awkward in my eyes that it makes me cringe and laugh at the same time. So little is said, as described by Jane Austen, and no lines are actually given between Lizzie and Darcy, yet every reader fills in the lines for themselves.

“As they walked across the lawn towards the river, Elizabeth turned back to look again; her uncle and aunt stopped also, and while the former was conjecturing as to the date of the building, the owner of it himself suddenly came forward from the road, which led behind it to the stables.

They were within twenty yards of each other, and so abrupt was his appearance, that it was impossible to avoid his sight. Their eyes instantly met, and the cheeks of each were overspread with the deepest blush. He absolutely started, and for a moment seemed immoveable from surprise; but shortly recovering himself, advanced towards the party, and spoke to Elizabeth, if not in terms of perfect composure, at least of perfect civility.

She had instinctively turned away; but, stopping on his approach, received his compliments with an embarrassment impossible to be overcome.” (chapter 43)

The LBD version of the meeting at Pemberley Digital is equally delightful and uncomfortable, but in different ways. Gigi instigates the meeting instead of it happening by chance. I see why the creators did this. Perhaps it was so that it could more easily happen on camera. Perhaps they wanted Gigi to take a more active role in brining the couple together. Either way—I like it. Gigi‘s scheming is good-natured and well meaning. She seems to know her brother and Lizzie better than they know themselves because she sees that they are compatible. Gigi is able to give Lizzie and Darcy a second chance at getting to know each other and seeing each other in a better light. Gigi also seems to have a partner in crime for her scheming… Fitz! Check out their tweets to each other. They are adorable.

Bing and Lizzie have some AWKWARD conversations. She seems semi-hostile to him and he seems like a sad puppy that is looking for some sort of consolation. Either way this is not my favorite part of the series. Bing also looks like he has been constantly crying because his eyes look red. Lizzie makes the remark “he is a med student… shouldn’t he be in class at least some of the time?” Overall I was totally bored by the Bing videos especially when compared to the other videos from this section. Bing without Jane=Dull… he should figure that out SOON.

Gigi decides to tell Lizzie what happened with George Wickham on the videos. Lizzie tells her she doesn’t have to, but Gigi insists. Wickham took advantage of Gigi when she was in school and became her swim coach. They started a relationship and Wickham moved in with her. Wickham’s motives seem to have been revenge on Darcy and to get money from him, or at least to mooch off Gigi for a while.

This is a particularly powerful episode since the story comes from Gigi herself instead of from her brother. Gigi explains her vulnerability when she says, “He said he needed me.” She was doped by George and taken in by his lies and promises. She dreamed that George really loved her and that she could convince her brother that their love was real. Darcy proved her wrong when George left so easily because of a check from Darcy. Gigi says she was drawn to Lizzie because nothing she said about Darcy comes close to what she has said about him to his face. She ends her story by telling Lizzie, “He [Darcy] really takes care of those that he cares about.” Gigi gives us a new perspective on Darcy and on George so that we can begin to see both of their true characters.

Lizzie, Darcy and Gigi spend the weekend sightseeing in San Francisco, and while there isn’t a video blog about their exploits there are their tweets!

Lizzie and Darcy’s relationship seems to blossom while she is visiting Pemberley, but since she knows he and sister watch the videos, she does not give much personal feedback on how she is feeling about their changing relationship. I understand why she couldn’t/wouldn’t post a video with commentary about her time at Pemberley and her actual thoughts about Darcy and Gigi, but I do wish we could have a little more.

Lizzie interviews Darcy, as the head of Pemberley, about his company, but he actually turns the conversation to be about her video diaries. He complements them and Lizzie. Then they have an interesting discussion about the costume theater and whether it is mocking or not. Both Lizzie and Darcy say that they have been too quick to judge others, and they are now trying to see things from other people’s perspective. This is a wonderful video that shows both Lizzie and Darcy’s growth and how they are becoming more comfortable with each other. Darcy REALLY lightens up when he impersonates Fitz in the costume theater. It is wonderful! 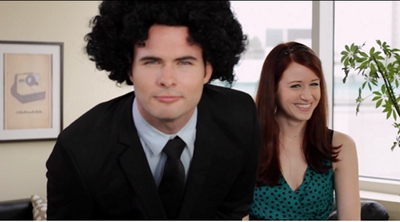 And then to the bad news… Lizzie gets a new phone because her old one has been messing up so much, so she has not been able to talk to Charlotte for a day or so. When her new phone finally finishes authorizing she sees that she has 7 missed calls from Charlotte. Darcy is with her because he came to ask her to the theater that night for a date. She says she would be happy to go… BUT, then she gets the news about Lydia. She had no idea Lydia was dating George because she has not been watching her videos and has not talked to her sister since Christmas. Lizzie blames herself. She says, “I could have prevented this.” She is upset and frazzled, but Darcy steps in and tries to calm her down. He is level headed and offers to get her home right away and to send her stuff along after she leaves. Lizzie is grateful and says thanks, but she does seem very uncertain of what the future holds. 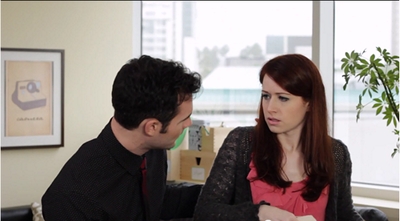 Overall the Pemberley episodes are my favorite. We meet Gigi who is a wonderful addition and a great modern take on the character of Georgiana. We see Lizzie and Darcy getting to know each other again and starting to like each other, and we see how they handle themselves in a crisis. We can really see the chemistry between Darcy and Lizzie in these videos since they are together so much more. There are several episodes where they both look at each other and the looks on their faces are just BRILLIANT!!!

2 thoughts on “A Closer Look at The Lizzie Bennet Diaries: Episodes 77-84”