This week I will be looking at episodes 51-66 of The Lizzie Bennet Diaries starting with Lizzie’s life while she is visiting Collins and Collins. We get to meet several knew characters and get to see some of the most beloved ones in a new setting. Did I also mention that we get to see DARCY for the first time!

Lizzie goes to visit Charlotte at Collins and Collins. She meets Lady Catherine and her dog Annie Kins (though we never get to see Lady Catherine we just see Lizzie’s impressions of her). We also get to meet one of my favorite characters in the novel and in the series, Fitz, who comes with Darcy to look at Collins and Collins and give Lady Catherine a report on its progress. Darcy finally shows up in the videos and tells Lizzie he loves her. She flatly rejects him and tells him off for his rude behavior towards her and others and she also tells him to watch her videos. He returns later with a letter and having watched videos. Lizzie reads the letter but refuses to share its contents even with Caroline who comes trying to snoop and find out what is in the letter. Lizzie and Charlotte face off against Caroline and call her out for her manipulation of Bing. Collins flits in and out of several episodes mostly causing havoc by making Charlotte dress as a condiment or trying to make Charlotte work over Thanksgiving. By the end of these episodes Lizzie is ready to go home because home would probably be less stressful. In episode 62 Lizzie says, “This is definitely messing with my world view. Its like I don’t know myself anymore” (I consider this line akin to Austen’s “Till this moment, I never knew myself.” It is the turning point in the book for Elizabeth’s character)

Here are some highlights from Episodes 51-66: 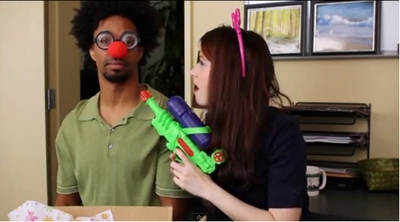 Colonel Fitzwilliam is one of my favorite characters from the novels. I have always had a crush on him because I found him to be so much nicer than his cousin. In some alternative universe I really think he and Lizzie would work out (even though he is a younger son and has no money).

In the alternative universe of the Lizzie Bennet Diaries Fitz (Craig Frank) and Lizzie can’t work out as a couple because he is gay. I think this modernization is BRILLIANT because it allows Fitz and Lizzie to be good friends, but it is known from the start that they will never be more than friends. Fitz in the LBD is a smart and well-established business executive (he can see two bridges from his corner office) but he is also super fun. I automatically want to be his friend and so does Lizzie. Lizzie wonders why Darcy can have such nice friends when he is so cold and stiff. Fitz explains “The guy doesn’t always make the best first impression, and he has the social skills of an agoraphobic lobster.” (episode 56).  Fitz does a fabulous impression of haughty Darcy and really enjoys goofing off on the videos. He says “Well what is life if you cant have a little fun? Am I right Lizzie B? You know you should meet Gigi… because she is a cool kid and I think you too will like each other” (episode 56). Fitz seems to be a nice guy who cares about his friends and has his head on straight yet a guy who can also loosen up and have a lot of fun. 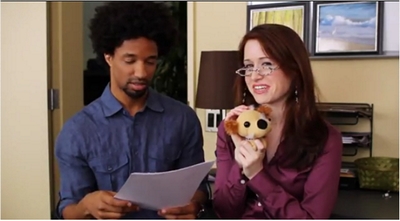 I hate that we never to get see Catherine de Bourgh but Lizzie’s impressions of her make up for this loss. Her daughter Anne is transformed into a snaggletooth, asthmatic dog named Annie Kins that Catherine dotes on. Mr. Collins prepares Lizzie for dining with Catherine de Bourgh by giving her a long list of dos and don’ts and by telling her “so if you will simply choose the least offensive outfit you have brought along with you, I am certain that will be more than satisfactory.” (episode 53). Catherine still tries to but into everyone’s conversations and adores Caroline Lee for her accomplishments even though it is unclear what Caroline does or if she even has a job or goes to school. 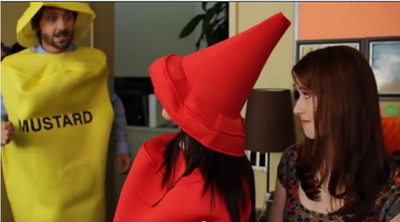 Mr. Collins is full of hair-brained ideas about improving the company morale. One if his ideas involves a “spirit week” of sorts culminating in a Halloween party where he and Charlotte dress up as condiments. Seeing Charlotte as a giant ketchup bottle is pretty amusing, but Mr. Collins as a giant mustard bottle takes the cake. His sincerity and seriousness make him even funnier. Collins tries to make Lizzie come to the party but Charlotte steps in and shows her control and handling of him. Mr. Collins might be the head of the company but Charlotte is the neck and she can turn the head anyway she chooses. 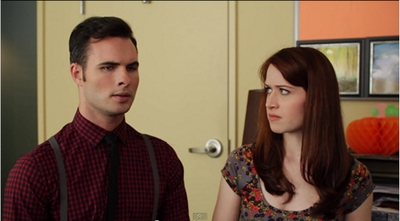 Darcy, Darcy, Darcy… everyone freaks out when Darcy is finally shown. Not this girl. I am going to try and keep my talk of Darcy to a minimum for several reasons:

The viewership of the Darcy episode almost doubled compared to other episodes. Episode 60 (where we first see his face) has had over 466,000 views. Don’t get me wrong– he will improve, and I do think the writing on his episode is fantastic; I just hate Darcy hype. These are called the LIZZIE BENNET DIARIES and that is who the story is about, so I applaud the writers and creators for putting off introducing Darcy till 3/5 of the way through the series. 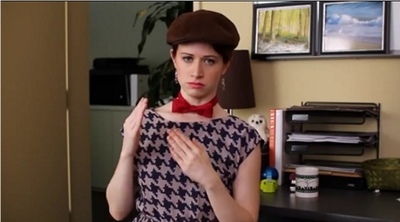 Ok, now on to Darcy. Daniel Vincent Gordh plays Darcy and does a very good job. He comes off as haughty and austere early on but does loosen up in later episodes. The writing for the proposal episode is a wonderful modernization of the scene from the book. I was worried that they would stray too much from the novel in his insults to Lizzie or that they wouldn’t have him insult her, but they did. Darcy says “I have been fighting against this for months now but Lizzie Bennet I am in love with you… I cant believe it either; that my heart can completely overwhelm my judgment.” Lizzie responds, “I hope that your judgment can be some solace in your rejection because those feelings are not mutual.” (Episode 60) In his video about the episode, one of the creators of the series Hank Green talks about how much effort and time went into writing this episode because they knew it was so important. Hank and his wife Katherine had a lot of input into who they chose for Darcy and the scene. Overall I applaud the series portrayal of Darcy because he does come off as a pretty big jerk at first and then starts to soften so that maybe you think he is just super awkward instead of a jerk. I could also do without the suspenders and skinny jeans, but I see why they did it.

Darcy hand writes and wax seals his letter to Lizzie, which is pretty cute and shows his quaintness. I thought they might do his letter as an email but I like that Darcy hand writes it and says that sometimes he has trouble expressing himself in words so he has to write things down. I think this is just the beginning of Darcy opening up. He also watches Lizzie’s videos because she tells him about them. He says, they were “illumining… you called me a robot and a newsie.” (Episode 62) 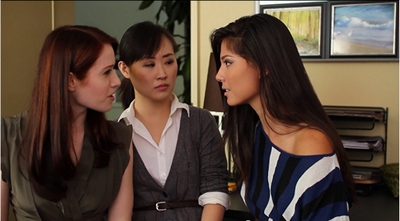 Caroline Lee shows up to try and see what was in the letter. Charlotte and Lizzie question her motives in befriending Lizzie and helping Lizzie with her videos since Caroline hasn’t spoken to Lizzie since they left. This betrayal by Caroline seems worse than in the book because in the book Lizzie never thought that Caroline was her friend. The fact that Lizzie and Jane are both hurt by Caroline’s lack of communication with them shows Lizzie’s vulnerability in a new way. Caroline comes off as manipulating, conniving and superficial. The nicest thing I can say about her is that she has great hair. Lizzie and Charlotte call Caroline out for her behavior, and I say, “You go GRILS!” If only Lizzie got to tell Mrs. Bingley off like that in the books. I think it would be very therapeutic to her.

I am leaving out Lydia’s videos from this weeks article because I want to be able to do them justice in an article all to themselves.

Favorite Quotes of the Week

“If Lydia ends up with in anyway involved with someone who traces back to Darcy I swear I am going to steal a plane and crash land onto a desert island. I can totally survive on coconut and crabs… assuming there is wifi.” (Lizzie in episode 54)

“I am pretty sure the guy read Tolstoy for you”

“Even if that is true the virtues of reading Russian literature are far out weighted by the fact that he disinherited George. Oh yeah and he broke up Bing and Jane” (Charlotte and Lizzie talking about Darcy in episode 61)

“You should see the texts I have been getting from Lydia about this OMG… WTF… WHATEVS… YOLO… FTS… PQZ!!!!” (Lizzie talking about Lydia’s reaction in episode 62)

“If you are in the Raleigh, North Carolina area this weekend please join JASNA NC for a discussion of The Lizzie Bennet Diaries. The talk will be held on Sunday March 17th at 2:00 at the Cameron Village Regional Library. Virginia Claire Tharrington will be showing clips and leading a discussion about the adaptation. We would love to see you there. Thanks VC”

3 thoughts on “A Closer Look at The Lizzie Bennet Diaries: Episodes 51-66”