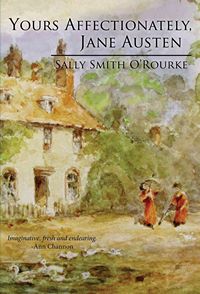 In this sequel to The Man Who Loved Jane Austen, Sally Smith-O’Rourke takes us on a journey through time and across continents as we explore what happened to the characters and romances from her first novel.

Yours Affectionately, Jane Austen picks up moments after the previous book leaves off. The heroine, Eliza Knight, a contemporary New York artist, is staying at the home of Fitzwilliam Darcy, a handsome, southern gentleman and the owner of Pemberley Farms in Virginia. Previously, Eliza and Fitz were brought together by a pair of mysterious letters written by Jane Austen herself which suggested that she once had an affair with an American named Fitzwilliam Darcy. A man whom she later used as the basis of the hero of Pride and Prejudice.

Though the letters are valuable, Eliza decides to give them to Fitz (for reasons revealed in the previous book, which I won’t spoil). Eliza must now deal with the fallout from refusing to reveal the contents of the letters to the public while navigating her blossoming love for Fitz and trying to understand his past as a time traveler. Yup, a time traveler.

Eliza’s story also intertwines with that of an 1813 Jane Austen. Fresh off the success of Sense and Sensibility and Pride and Prejudice, Jane is planning to publish her newest novel, Mansfield Park. Jane writes and spends time with her family, though she cannot quite forget the handsome American who suddenly fell into her life just three years before and disappeared just as quickly.

I may be at a disadvantage here because I’ve never read The Man Who Loved Jane Austen. If you’re in the same boat, you will probably be able to catch up very quickly as the author spends quite a bit of time recapping the events of the previous story. However, I would really recommend going back and reading the first installment if you plan to tackle this one.

The main reason for this is that I just couldn’t shake the feeling that The Man Who Loved Jane Austen was probably a much more interesting book than this one. Jane Austen? Mysterious letters? The truth about the real Fitzwilliam Darcy? Time travel? Budding romance? Sign me up. Once all of those questions are answered, there just doesn’t seem much left to do.

Almost nothing happens in this story until nearly 2/3 of the way through. Well, not nothing, but not the kind of things that one would want to spend an afternoon reading about. Eliza and Fitz’s growing relationship is really just a series of insignificant little tiffs and conversations that have almost no bearing on the story. There’s no spark or passion between them despite the fact that they met only two days ago and are starting to fall madly in love. Our time with Jane Austen, too, is surprisingly boring. Obviously, the author is taking liberties with the real Jane, her life, and family, but I couldn’t help wishing she had taken more. Jane’s life seemed to be nothing more than a quick succession of busy nothings. The whole story just needed more meat on its bones to get the reader interested.

Even another time travel subplot doesn’t do much to heighten the stakes. When one of the Austen family servants travels through time to contemporary England, Fitz worries quite a bit about creating a paradox in time and somehow ruining Jane Austen’s life. But, nothing really happens. I kept waiting for everyone’s copies of Mansfield Park, Emma, and Persuasion to start slowly disappearing Back to the Future style, but alas.

I also noticed a few errors in my copy, which is always annoying. One especially caught my eye as a devoted Whovian:

“The program that’s coming on is one of my favorites. It’s called Dr. Who. It’s a science fiction show about time travel. This guy, Dr. Who, has a time machine that looks like a police box from way back in the 1960s, and it takes him everywhere and anywhere. It’s really cool.”

The show’s title, of course, is written out as Doctor Who (and should be italicized). The main character is also never called “Dr. Who,” but is just simply referred to as “the Doctor.” He’s also not really a “guy,” but an alien from the planet Gallifrey who travels through time and space, but now I’m just nit-picking.

Aside from all this, the writing is actually very good. The author has a talent for vivid description and paints a beautiful scene wherever she takes us. The characters of Eliza and Fitz were likable and spunky at times. Even Jane Austen seemed like a perfectly lovely version of our beloved author. The dialogue is well done and even witty. Sadly, with all these good qualities, none of them seemed to go anywhere.

If you enjoyed The Man Who Loved Jane Austen and wondered what happened to Eliza, Fitz, and Jane when that story ended, then this book might be for you. However, I can’t help thinking that you might be better off letting your own imagination run wild.

2 thoughts on “Yours Affectionately, Jane Austen, by Sally Smith-O’Rourke – A Review”