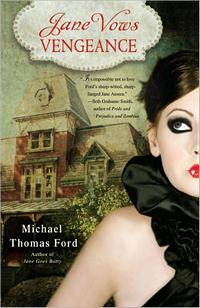 In the final novel in the Jane Austen Vampire trilogy (or is it???) we find our favorite two hundred year old undead authoress challenged by her condition, her past, and the future she is trying to make in Brakeston, New York with fiancé Walter Fletcher. After thoroughly enjoying the first two novels in the series, Jane Bites Back and Jane Goes Batty, we are all anticipation of how vampire Jane’s satiric, quirky and totally hilarious life in the twenty-first century will wrap up—or live on into eternity.

Wedding plans are in full swing even though Jane’s fiancé Walter is unaware of his future bride’s famous past or her present condition. His darling *cough* mother, Miriam the vampire hunter, is hampering the planning with her upbeat *cough* attitude and looming ultimatum that Jane must become pregnant within a year or she will stake her. Walter’s suggestion that they combine the wedding with a European tour offered by his architectural preservation association it quickly adopted finding an unlikely group of Jane and Walter’s friends and family jumping the pond to witness the nuptials in London and tour castles and other feigned sites of Europe together. Along the way they meet zombies, vampires, ghosts, forgotten husbands, and murdered fellow travelers, while Jane searches for the great vampire urban legend, Crispin’s Needle, capable of unmaking a vampire and restoring their human soul.

Ford has given us another treasure. The one-line zingers, snarky characters, break-neck pace, and nimble dialogue immediately remind us why it is such a joy to be back in his warped world. Jane Austen as a vampire? No way! Yes way! His prose is sharp, imaginative and shamelessly waggish, and we love it. The inside Janeite jokes abound. This sent us rolling:

“How awful to go through life named after someone you didn’t care for…For instance, suppose your mother adored Charlotte Bronte and you had been named Jane Eyre, yet you found the character stupid and tedious.”

“Doesn’t everyone?” said Jane, earning her a stern look from Lucy. p 69

Yes, Jane’s sick nemesis Charlotte is back, and so is her suave mentor Lord Byron, along with a slew of hilarious new characters. Jane Vows Vengeance takes us on a Da Vinci Code meets Agatha Christie meets Buffy the Vampire Slayer adventure that I did not want to end. We can only hope that Ford will be coerced into another set of three to appease the facetious Austen, vampire, three-legged talking Chihuahua, parody lovers in us all.

8 thoughts on “Jane Vows Vengeance: A Novel, by Michael Thomas Ford – A Review”