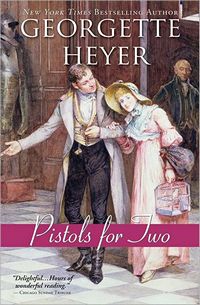 Guest review by Laura A. Wallace:

Pistols for Two is a collection of eleven short stories first published in 1960.  Throughout her writing career, Heyer published her novels in serial form in various periodicals and published short stories in them as well.  This is the only collection published as a book; otherwise, her short stories exist only in old copies of the various magazines.  In researching her biography of Heyer, Jennifer Kloester tracked down bibliographic information on as many stories as she could find, and lists them in an appendix, but she states that there are probably more still undiscovered.  This corrects a general and long-held impression that Heyer only wrote a few short stories, and that nearly all of them were included in Pistols for Two.  But Heyer did choose the stories in this collection herself, so she must have considered them among her best.

These stories are delightful microcosms of Heyer’s work.  They all feature the deft characterizations that Heyer always provides:  she excels in summarizing a character in a few brief sentences.  What is lacking, of course, is the layering that provides depth in a full-length novel.  Each also necessarily features a very compressed timeline of action, often covering only a few scenes and a few hours, and since they mostly are love stories, several of them feature love at first sight.  In short, their only real defects are the limitations of the short story form itself.  For this reason, I strongly recommend the reader to resist the urge to gobble them up all at once:  space them out instead, with something else in between to leaven them.

One particularly delightful aspect of these stories for the Heyer aficionado is the recognition that comes here and there.  Heyer uses some names that appear in her novels, but, more importantly, there are identifiable germs of ideas, characters, and relationships that are developed later more fully in the novels.  For example, in “A Clandestine Affair,” Lord Iver appears to be a prototype of Ivo Rotherham in Bath Tangle, and if that novel’s heroine Serena’s prototype does not appear, the broken engagement does.  (Note, however, that in publication dates, Bath Tangle precedes the short story by five years.)  More than one damsel is clearly related to Amanda, Eustacie, and Leonie; and more than one gentleman resembles Sir Waldo Hawkridge, the Duke of Avon, the Marquis of Alverstoke, or even the Earl of Worth.  “Pistols for Two” includes a set of young gentlemen who must surely be the original sketches for the young set in The Nonesuch making cakes of themselves over Tiffany Wield.  Discovering these embryonic (or sometimes revisited) characters and situations almost feel as if Heyer is sharing a special treat with her readers.

In “A Husband for Fanny,” however, Heyer visits a theme which I can’t remember in any of her novels, and wish she had.  (Details omitted to avoid spoilers.)  And in another story, there is a macabre twist that is all the more surprising for being surely unique in Heyer’s oeuvre.  So in addition to the familiar characters and situations, there are a few stories that show Heyer exploring ideas that she never developed into novels and thus stand alone in her work.

Please avoid spoilers in your comments as these stories are new to many people, especially since the collection has been somewhat hard to find until being republished this month by Sourcebooks.

This concludes my last review of the Georgette Heyer re-issues by Sourcebooks for Austenprose.  I hope that promoting these books has brought many readers to Heyer for the first time.  She continues to give me joy, and I remain grateful for her life and her work.  I’m also grateful to Laurel Ann for providing me with this opportunity to share Georgette Heyer with you.

Laura A. Wallace a musician, attorney, and writer living in Southeast Texas.  She is a devotee of Jane Austen and Georgette Heyer and is the author of British Titles of Nobility:  An Introduction and Primer to the Peerage (1998).

15 thoughts on “Pistols for Two, by Georgette Heyer – A Review”