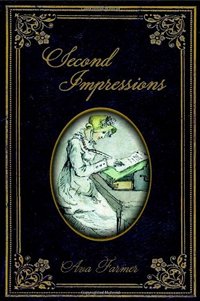 With her husband’s solemn assurances that he did not regret his marriage to her as the cause of no heir, his generous and reasonable reflections on the matter, and his half-jest that , ‘should Georgiana never marry, one of the Bingley boys will do very well,’ Elizabeth could have no cause to repine.  She had daily the very pleasant female society of Georgiana, and could visit the Bingleys whenever she chose.  Mistress of her days, spent in the informed intercourse and agreeable companionship of her husband and his sister, Elizabeth regarded her own as the best of blessings.  Elizabeth was as happy as even the wife of Mr. Darcy should be.

As a continuation of Pride and Prejudice, Second Impressions is a monolith of good Austen example, a shining beacon of this-is-how-we-do-it research technique that is so prettily put together – the original author of Pride and Prejudice would be dazzled.  And me?  Well, I was dazzled too.

The very first, uh…impression that you get of Second Impressions is this.  The amazing proficiency that Ava Farmer shows is astounding, and as she flexes her Regency muscles on the page your mind will reel.  Just how long did it take her to figure this out?  To write as Jane Austen wrote without second guessing every word or running to an encyclopedia, making it seem as natural as if she were simply channeling our beloved author?  26 years, actually.  It took Ava Farmer 26 years to put this baby together and believe me, it shows.  Paragraphs about architecture, medicine, education, climate, horticulture, and the care of animals bubble up everywhere and fly out of every character’s mouth, both in England and abroad.  Beyond the research, Farmer’s writing positively smacks of Austen, even down to inserting the next word after the page-turn at the bottom of the one before it, a cute and clever addition to the elegant prose.

The story loosely revolves around Georgiana, Elizabeth, and Darcy while they live out their days in all the luxury and stimulation that Pemberley has to offer.  They wine and dine and dance and visit and play music, all the while shaking their fists at the sky over the lack of an heir.  Elizabeth’s sister Jane’s pregnant with her fifth, however, and seems to slowly be settling into exhaustion just as younger sister Kitty nails down a suitor for herself.  The reader becomes privy to the fabulous background stories of Cousin Fitzwilliam and Lady Catherine DeBourgh as the story continues, and later, even familiar Austen characters show up, both as representations and as the real thing.  Darcy asks Mr. Knightley (from Austen’s novel Emma) “on a tour of the Pemberley collieries” and “often of a morning joins Captain Wentworth (from Persuasion) at the Corn Exchange to review the news.”  Sidney Parker from Sandition is a favored confidante of Mr. Darcy, and the less-than-loveable windbag character found in Emma’s Miss Bates is reproduced for the portly, voluble Parson Overstowey.  Yes, it’s a veritable feast for any student of Austen or lover of Pride & Prejudice, and certainly not unworthy of enormous praise and passion.

Yet despite all the beauty of Second Impressions (First Impressions was the original title of Pride and Prejudice…but you already knew that), I did find flaw with the tendency for all the scholastic research to cloud and impede the forward movement of the story.  There were a few moments that drew out like a stick through molasses, slowly and heavily trudging toward an unknown end, and one particular comment from Elizabeth that forced my brow to furrow and my mouth to form the words, “Uh…when would Jane Austen ever write something like that?”  The characters sometimes act more like caricatures, intricately arranged to display the research in greater detail rather than take part in the scene.  The resulting plot is a bit slow, and is particularly arduous during the Darcy’s family trips abroad.  BUT!  My quibbles are small, and yours will be too.  There was great enjoyment during my time in Ava Farmer’s world, and truly, the study and examination that went into its creation cannot be lauded enough.   This one should go on your shelf.

Originally from Montana, Shelley DeWees is a Professor of English at Hankuk University of Foreign Studies and a confessed lover of all British literature (though her writings would lead you to believe she's a bit Jane-obsessed...an assumption she wouldn't work too hard to thwart). Her writings and reviews have been seen on Austenprose, Jane Austen's World, and Jane Austen Today, as well as in several periodicals, both scholarly and popular. Groove Korea Magazine features her monthly vegetarian food column, Seoul Veggie Kitchen, and has also published many of her latest works including "Korea's Avoidable Obesity Abyss" and "Veganize Me: A Guide for Newbies in Korea." She’s also an avid distance runner, a vegan chef, and the creator of TheVeganU.com, which will launch late in 2013. You can find out more about Shelley at www.seoulveggiekitchen.com. View all posts by Shelley DeWees

11 thoughts on “Second Impressions, by Ava Farmer – A Review”