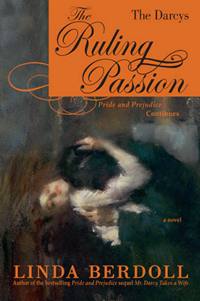 Best-selling author Linda Berdoll’s Mr. Darcy Takes A Wife and Darcy & Elizabeth have been hailed as “sexy, hilarious, poignant” and “wild, bawdy and utterly enjoyable (Booklist.)”  But also, “blasphemy, smut and trash,” are not uncommon adjectives used by her severest critics. Rarely has there been such a clear division of thought between two camps: those that fervently love her work and those that vehemently hate it. I for one am with Team Berdoll and at the risk of having my Janeite card revoked, boldly declare that Linda Berdoll sets the standard for this romance genre.  I will stride out even further by surmising that many “romance” writers of Pride and Prejudice re-imaginings and sequels strive to emulate not Jane Austen, but Linda Berdoll. Regardless of what side you defend or how you receive my pert opinions, having sold nearly 350,000 copies, one cannot deny Linda Berdoll is the reigning Pride and Prejudice romantic sequel writer to date.

The Ruling Passion, her highly anticipated sequel to the sequels, has finally come to fruition.  This self-published sequel opens in the year 1818, approximately two years after Darcy & Elizabeth: Days and Nights at Pemberley concludes; wherein Darcy had saved the family from scandal (again) and that scurrilous rat George Wickham has received his comeuppance — his “whennymegs” were shot off!

The Darcys still have an exceedingly loving marriage in this continuation of one of classic literatures most beloved couples.

“Despite their duties to hearth, park and children, they consoled each other’s enduring appetence with great enthusiasm.  Time and children had not mitigated their passion whatsoever.  If any consternation bedeviled them, it was finding privacy wherein to avail themselves of their desire, not want of it.” (8)

Albeit, what bedevils the Darcys is the re-introduction of Lady Howgrave, formerly Juliette Clisson, newcomer to the neighborhood, but as Darcy’s courtesan of his bachelor days, not new to this narrative.  As we discover that Juliette’s marriage contract was partially based on her presenting Sir Henry Howgrave with a son and heir, his own potency comes into question.  Although the beautiful Juliette could easily engage any number of competent studs, her own experiences with Darcy’s virile credentials and his now known accomplishment at fathering sons, she becomes well-nigh obsessed with getting him back into her bed.  Or carraige.  Or wherever she can entrap him.

Whilst Reactionaries and Civil Libertarians rally for political support, and as radicals and rabble rousers incite riots in London, sadness falls upon Pemberley: the Darcys lose an infant son to a putrid fever. Elizabeth slips into a deep depression and closes herself off to her husband and his comfort.  “Her love for her husband had not wavered.  But, imbedded in a muddle of fear and grief, she did not allow herself to take pleasure in their amorous inclinations.  She clasped his nightshirt and buried her face against his neck as he took her.” p. 172.  Therefore, as Elizabeth undertakes a circuitous quest for redemption from Pemberley to her childhood home of Longbourn and back, the Darcys too must find a way back to each other.

Berdoll weaves a rich cabal by her own coloring of classic Austen characters as well as those she thusly contrived.  Her style of recounting each character’s tale, entangling with all the others is mesmerizing and kept me turning pages as I puzzled out their fit.  I laughed heartily at the tongue in cheek (and other sensitive spots) euphemisms of the burlesque, smirked at her quirky yet exacting vernacular, smiled at the quick-witted teasing, and sighed at the tender exchanges between a man and woman who truly adore one another.  I might add, unlike the Mr. Darcy Takes A Wife, when the Darcys were newly married and their conjugal proclivities numerous — and ubiquitous– this latest offering does not focus as much on those amorous seductions.  As much, but more on the vissitudes of Elizabeth & Darcy, Juliette’s scheming, and the intrigue of a Mr. Alistair R. Thomas.

If your sensibilities are offended by explicit, passionate love scenes with Jane Austen’s original namesakes, this is presumably NOT the book for you.  However, those who delight in reading about the Darcys beyond Pride and Prejudice, including all their complexities, and intimacies, (in and around the bedroom), and most particularly if you are a fan of Berdoll’s previous works, The Ruling Passion is not to be missed!  Yes, hold on to your bonnets as Linda Berdoll has quite done it again.

Note: For now, you can only purchase this through the author’s website www.lindaberdoll.us. eBooks and other outlets are in the works.

16 thoughts on “The Darcys, The Ruling Passion: Pride and Prejudice Continues, by Linda Berdoll – A Review”