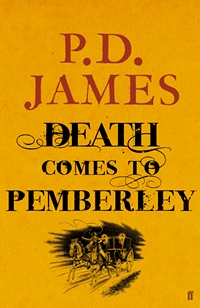 Do you remember what your reaction was when you learned that famed British crime novelist P. D. James, an ardent admirer of Jane Austen, had written a sequel to Pride and Prejudice? I do. I gasped in total disbelief and stared at my computer screen for about a minute while the world around me stood still.

This – was indeed incredible news. One of my favorite mystery authors had written an Austen-inspired sequel?  It doesn’t get much better than this Janeites!

The news was released the first week of October. It has received so much press that it is hardly breaking news anymore, but I am still giddy and a bit goofy over it.

On Monday I received my advance reading copy. Goosebumps! More goofiness. The book has released in the UK on November 3rd by Faber & Faber and it will release here in the US on December 6th by Knopf. Here is description of the book from the publisher:

A rare meeting of literary genius: P. D. James, long among the most admired mystery writers of our time, draws the characters of Jane Austen’s beloved novel Pride and Prejudice into a tale of murder and emotional mayhem.

It is 1803, six years since Elizabeth and Darcy embarked on their life together at Pemberley, Darcy’s magnificent estate. Their peaceful, orderly world seems almost unassailable. Elizabeth has found her footing as the chatelaine of the great house. They have two fine sons, Fitzwilliam and Charles. Elizabeth’s sister Jane and her husband, Bingley, live nearby; her father visits often; there is optimistic talk about the prospects of marriage for Darcy’s sister Georgiana. And preparations are under way for their much-anticipated annual autumn ball.

Then, on the eve of the ball, the patrician idyll is shattered. A coach careens up the drive carrying Lydia, Elizabeth’s disgraced sister, who with her husband, the very dubious Wickham, has been banned from Pemberley. She stumbles out of the carriage, hysterical, shrieking that Wickham has been murdered. With shocking suddenness, Pemberley is plunged into a frightening mystery.

Inspired by a lifelong passion for Austen, P. D. James masterfully re-creates the world of Pride and Prejudice, electrifying it with the excitement and suspense of a brilliantly crafted crime story, as only she can write it.

Even better – listen to P. D. James reading a thrilling four minute excerpt of the arrival of the news of a death of a character that we have all wanted to kill.

Great interview! How can I top all this excitement? Why, by offering you, gentle reader, a chance to win one of three copies of Death Comes to Pemberley being generously offered by Faber & Faber.

Just leave a comment stating why you deserve to win this book. Show your creative side and Janeite geekiness so I don’t look like such a gushing fool. Okay, if that embarrasses you, then share with us which character in P&P you hope that P. D. James has bumped off by midnight PT, Wednesday, November 23, 2011. Winners to be announced on Thursday, November 24, 2011. Shipment Internationally! Good luck!