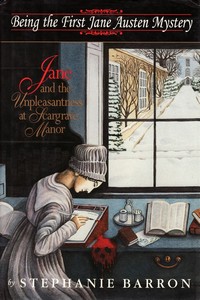 Imagine being present when Jane Austen’s unknown personal journals are discovered in an outbuilding on an ancient Maryland estate, Dunready Manor. Your friends the Westmoreland’s are distantly related to the authoress, and after restoration they place the manuscripts in your care before they are donated to a major library. They recount years of Jane Austen’s life and personal experiences that we know little of, the lost years after 1801 when she, her sister Cassandra and her parents move from their lifelong home at Steventon rectory in Hampshire to Bath. Filling in gaps in life events, missing letters thought destroyed by her sister after her death, and mysteries that she encountered and solved in her lifetime, you are mesmerized. You are allowed to study, edit and transcribe the journals. What unfolds is an intimate and highly intelligent account, blending Jane’s personal life and criminal observations as an amateur detective.

In 1802, fleeing a broken engagement with Harris Bigg-Wither of Manydown Park, Jane seeks to forget her troubles in a ‘whirlwind of frivolity’ accepting an invitation to visit her newly married friend Isobel Payne, Countess of Scargrave. Isobel has recently returned from her wedding trip to the Continent with her husband Frederick, Earl of Scargrave, a gentleman of mature years. To celebrate their recent nuptials the Earl is throwing a bridal Ball in his wife’s honor at their estate in Hertfordshire. In attendance is the Earl’s nephew and heir Fitzroy, Viscount Payne, the only son of his younger brother. Jane observes, ‘As a single man in possession of a good fortune, he must be want of a wife.’ Decidedly handsome, but proud and aloof, she instead spends a good deal of the evening dancing with a young cavalry officer, Lieutenant Thomas Hearst, the second son of the Earl’s deceased sister. Jane learns from a young lady, Miss Fanny Delahoussaye, that Hearst has a bit of reputation having recently killed a man in a duel of honor. She also reveals that Hearst is also a rake, prompting Jane to proceed cautiously. ‘My wordless confession made him hesitate to utter a syllable; and thus laboured in profound stupidity, for fully half a dance’s span. But all things detestable, I most detest a silent partner – and thrusting aside my horror of pistols at dawn, I took refuge in a lady’s light banter. “I have profited from your absence, Lieutenant, to inquire of your character,”’ and so begins and tête à tête between the Lieutenant that must have inspired Jane in her later writing. ;-)

Even though this is a festive and joyful event, trouble is brewing. Jane is concerned for her friend when Isobel is alarmed by the uninvited arrival of Lord Harold Trowbridge who is pressing her to purchase Crosswinds, her father’s troubled estate in Barbados. She also overhears an argument involving George Hearst, Thomas’ elder brother, and the Earl over a woman. Within minutes after the heated discussion, the Earl toasts his bride to his guests, downs his drink and doubles over in acute pain. He would never recover. Isobel is a now widow. A cruel twist of fate for a young bride, however, bereavement is the least of her worries after she receives cryptic missives accusing her and the Earl’s heir, Viscount Payne, of adultery and murder. Terrified of scandal Isobel entreats her dear friend Jane for help. Top on Jane’s list of suspects are the many guests in attendance at the Ball, a collection of characters that all seem to benefit from the Earl’s death. Like any good detective, Jane follows the clues which lead to Isobel’s former maid, Marguerite. Soon, she too is dead, her neck cut in one of the outbuildings on the Scargrave estate. With a second death, most definitely a murder, the authorities are also involved and Isobel is facing murder charges. The investigation will call upon all of Jane’s perceptive acumen leading her to the House of Lords and Newgate Prison, a place fit for no clergyman’s daughter, unless it is in pursuit of the real murderer to free her dear friend.

It has been fifteen years since I first was introduced to Jane Austen detective when this novel took me quite unawares in 1996. The notion of “my” Jane as a sleuth is still surprising, even after reading ten novels in the series, but it only takes a page or two before I am smiling and in total awe of Barron’s skill at channeling my favorite author. And channel she does. I know of no other that can rival her skill at early nineteenth-century language and humor. Blending events from Jane Austen’s actual life with fictional narrative, this detective story is in itself a mystery as I hunt for clues to known facts from Jane’s life and allusions to her future characters in her novels. Anyone with a passing knowledge of Austen’s famous romantic icon Mr. Darcy will recognize Barron’s gentle nod to him in Viscount Fitzroy Payne. Possessed of aloof pride and haughty silence, ‘Everyone wants to know him, but few truly like him.’ Barron has Jane play her future heroine Elizabeth Bennet by taunting her Darcy-like character. “I detect a similarity in the turn of our minds, Viscount Payne,” I persisted, in some exasperation. “We are both of a taciturn, ungenerous nature and would rather be silent until we may say what is certain to astonish all the world.” There are several passages of dialogue that will send a spark of recognition with other characters too, but the story is entirely Barron’s own darling child. This is after all, an homage, a pastiche to Austen, her life and her works. In total respect and with perfect pitch, Barron blends our Jane with a cleverly crafted mystery, infused with historical detail and cutting wit. Jane Austen may have only written six major novels in her short life, but Barron can certainly be credited as the next best thing to perfection.

6 out of 5 Regency Stars

This is my first selection in the Being a Jane Austen Mystery Reading Challenge 2011. You can still join the reading challenge in progress until July 1, 2011. Participants, please leave comments and or place links to your reviews on the official reading challenge page by following this link.

Author Stephanie Barron has generously offered a signed hardcover copy of Jane and the Unpleasantness at Scargrave Manor to one lucky winner. Leave a comment stating what intrigues you about this novel, or if you have read it, who your favorite character is by midnight PT, Wednesday, January 26, 2011. Winner to be announced on Thursday, January 27, 2011. Shipment to US and Canadian addresses only. Good luck!

39 thoughts on “Jane and the Unpleasantness at Scargrave Manor, Being the First Jane Austen Mystery, by Stephanie Barron – A Review”