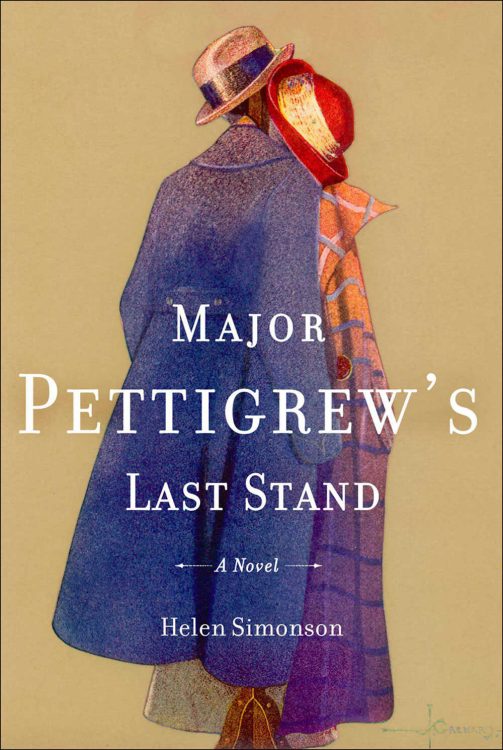 Occasionally, I am tempted to read outside my Austenesque book sphere when high praise and an engaging book description influences my TBR (to be read) pile. It has taken me over six months to get to Major Pettigrew’s Last Stand. My only regret is that I put it off so long. What a pleasure to discover a debut novel with so much charm, wit, and satirical humor.

“You are a wise man, Major, and I will consider your advice with great care–and humility.” He finished his tea and rose from the table to go to his room. “But I must ask you, do you really understand what it means to be in love with an unsuitable woman?”

“My dear boy,” said the Major. “Is there really any other kind?”

The main characters are a typical collection of fictional fodder, but with a clever slant. Therein lies its appeal. Pushing seventy, retired Major Ernest Pettigrew is not your usual hero. A delightfully droll proper English gentleman, the major lives in the small idyllic country village of Edgecombe St. Mary in Sussex populated with an array of characters so foibled, it would make Jane Austen blush. Roger, his self-absorbed son is a banker in London driven by money and social connections with an equally obsequious American girlfriend Sandy. The major readily admits that if he and Roger were not united in blood they would have nothing in common. There is also the morally amenable Anglican vicar and his busybody wife, the financially challenged local Lord, the opinionated golf club cronies, recently widowed sister-in-law and her grubbing family, and Mrs. Jasmina Ali, an elegant fifty something Pakistani widow and proprietress of the local convenience store who shares his interest in literature and his wry sense of the ridiculous in his neighbors and the world. Their friendship evolves into a love story igniting local gossip and cultural prejudices that challenge the Major’s social sphere and re-evaluate his values.

A Blend of Social and Personal Challenges

Major Pettigrew’s Last Stand is a comedy of manners in the traditional sense but it also offers more than a gentle nod to the clash of cultures experienced in Britain when her colonial children immigrate to mother country, but after years and generations, are still considered outsiders. The story touches on important issues: love, honor, family obligations and tradition by exploring social values in the treatment of our elder parents, out-of-wedlock children, interfaith alliances, land stewardship and social progress. This may all seem rather dry, but the way in which Simonson blends in all the personal challenges between children, friends, and community with a strong emphasis on humor is enchanting. The highlights for me were the duck hunting scene and the club dinner dance. Simonson has a way with similes and action description that left me crying with laughter.

There were moments at the beginning of the novel where I cringed at her caustic treatment of the American girlfriend Sandy with her brash manners and focus on the almighty dollar. However, I knew that I was being overly defensive for my countrymen when her boyfriend Roger Pettigrew and many of the other British characters act even more offensive and mercenary throughout the story. As an Anglophile she had me at page one, but I give full credit to Simonson’s polished and engaging writing style reverently influenced by the classics. Besides the similarities to Austen’s witty slant on three or four families in a country village, I can see bits of Georgette Heyer, P. G. Wodehouse and George Bernard Shaw in her energized dialogue, social reproof, and sense of high comedy.

Major Pettigrew’s Last Stand is one of those unique debut novels that humorously captures a sense of what is familiar in our own lives and fictional lexicon by introducing memorable characters you will cherish. I recommend it highly.

We received a copy of the book from the publisher in exchange for an honest review. Austenprose is an Amazon affiliate. Cover image courtesy of Random House © 2010; text Laurel Ann Nattress © 2010, austenprose.com. Updated 19 March 2022.

17 thoughts on “Major Pettigrew’s Last Stand: A Novel, by Helen Simonson – A Review”