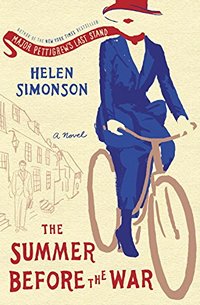 If this novel was a miniseries, she’d be the lead in an outstanding ensemble cast. To her left, Mrs. Agatha Kent, mentor, and “of a certain age when the bloom of youth must give way to the strength of character, but her face was handsome in its intelligent eyes and commanding smile.” To Beatrice’s right, Hugh Grange, likely the most uncomplicated man in town…who happens to be a brain surgeon. The residents of Rye create the rich background we so enjoyed in Ms. Simonson’s debut, and Rye itself rounds out the cast as quintessential England. I had no trouble balancing the many characters who exit the other side of the war—the autumn after the war, so to speak—forever altered. Just as it should be.

Beatrice faces the limits of her altered circumstances with quiet humor—often having to bite her tongue. She manages her frustrations better than I, who in turn suffered indignation on her account and that of the two people she yearns to protect. Snout, a clever lad of mixed Romany heritage, has a working plan for a brighter future; Celeste, a Belgian refugee, has lost everything to the invading German army except the father who has broken her heart.  With a light touch, the author parallels Beatrice’s life with the oncoming war. I expect most readers of this type of literary fiction appreciate the immense reshuffling of everyday priorities brought about by World War I.  Rye’s residents talk of glorious and short-lived war was ideological, always heartbreaking, and foreshadowed well when Mr. Tillinghurst relates his thoughts on America’s Civil War (and you may think of him as Author Henry James if you’d like): “Most of all, I remember that what begins with drums and fife, flags and bunting, becomes too swiftly a long and grey winter of the spirit.” The Great War becomes the backbone of this story, fleshed out with the tenuous balance of its characters’ emotions which carried me from chapter to chapter with spot-on dialogue. Just as Beatrice finds renewed purpose, her sheltering cloak of friends-as-family unravels in the face of the conflict’s terrible reality.

I enjoyed the storyline and pacing of this novel, but I believe its gift is how the painful transitions of the townspeople are made personal to the reader yet softened by Miss Simonson’s clever prose. While some may argue that beautiful phrasing diverts the reader’s attention from the story and to the writer’s skill, I soaked up everyone like so much steamed pudding. Consider this delicacy: “Humiliation is the sport of the petty.” If I hadn’t been driving when I heard that, I would have written it down on the spot. (As you can see, I eventually did!) Yet, just like rich, buttery tea biscuits, one shouldn’t overdo, and the words may feel puffy at times. For me, it was as rewarding as Ms. Simonson’s debut, though I admit to a soft spot for this time period.

The Summer Before the War, by Helen Simonson, is a poignant look at love and resiliency of character, brought to life when an independent young woman must succeed in unfamiliar surroundings just as war pushes all England into uncertainty.

Debra E. Marvin is one of the founders of Inkwell Inspirations Blog. In 2015 she released her first two novellas, “Alarmingly Charming” in Austen in Austen Vol 1 from WhiteFire Publishing, and “Desert Duet” from Forget Me Not Romances. Her unpublished contest successes included finals in The Fab Five, The Maggies, the TARA, Great Expectations, Heart of the Rockies, twice in the Daphne DuMaurier, and the overall winner of the Phoenix Rattler. Debra works as a program assistant at Cornell University in upstate NY, and enjoys her family and grandchildren, obsessively buying fabric, watching British programming and traveling with her childhood friends. You may find out more about her by following her on twitter as @DebraEMarvin or at her website.

11 thoughts on “The Summer Before the War: A Novel, by Helen Simonson – A Review”