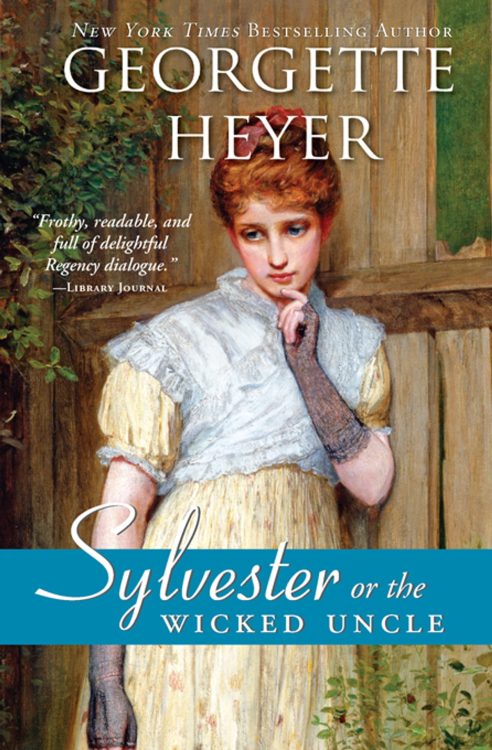 Originally published in 1957, Sylvester, or the Wicked Uncle is one of Georgette Heyer’s more popular Regency romance novels. Its protagonist (or maybe antagonist) is the wealthy, arrogant, and pragmatic Sylvester Rayne, the Duke of Salford. In his twenty-eighth year, he has taken it upon himself to marry, much to the surprise of his mother, the Dowager Duchess of Salford, producing a short-list of five suitable debutantes that meet his exacting standards of an accomplished woman! (Mr. Darcy was more generous in his assessment of the female sex. He allowed half a dozen ladies “in the whole range of my acquaintance, which are really accomplished.”) ;-) However, among the list of beautiful and well-bred young women, his mother does not see her first choice, the Hon Phoebe Marlow, granddaughter of his godmother Dowager Lady Ingham.

Sylvester soon travels to London to consult Lady Ingham, but he is put off by her inelegant attempt to fix the match solely based on the fact that her daughter, Phoebe’s mother, and his mother were best friends. Meanwhile, word reaches Phoebe’s spiteful stepmother that the Duke of Salford will shortly make an offer for her hand and commands her to accept. Horrified, Phoebe is also put off by the reasons for the alliance and her memory of the cold, proud Duke of Salford from her London season. When they are formally introduced she is shy and dull, and he is unimpressed. In a panic, Phoebe runs away to London and the sanctuary of Lady Ingram, escorted by her childhood friend Tom Orde. A carriage accident interrupts their journey happened upon by Lord Rayne who thinks he has discovered a runaway marriage in progress. When a snowstorm traps them all together at the local Inn, Sylvester begins to see that Phoebe is actually quite intelligent and interesting, and not at all the young woman of his first impression. Gallantly, he removes any concerns that she may be harboring on his proposing marriage to her. She, in turn, is gratefully relieved sharing that nothing could possibly induce her to marry him!

In typical Heyer fashion, her independent heroine and staid hero are the most unlikely couple imaginable. How she will bring them together is a humorous and engaging adventure, filled with pride, prejudice, and misunderstandings. In addition, Heyer’s cast of secondary characters are predictable but most welcome: Ianthe the spoilt and impulsive widow of Sylvester’s twin brother who thinks he is a villainous brute, Sir Nugent Fotherby her foppish and absurd fiancé, Tom Orde the steady and trusting family friend, and Lady Ingham the meddling but well-meaning older relative, among others.

Heyer excels at bringing out the eccentric and the ridiculous in her characters played against dry humor like few can. The subplot of Phoebe anonymously writing a Gothic novel mirroring the personalities and physical characteristics of her family and friends is brilliant. When Sylvester’s signature devilish-looking eyebrows show up on the villain Count Ugolino, scandalizing the Ton, she unintentionally admits that she was the authoress resulting in hilarious fallout. As with all of Heyer’s romances, there is a hard-wrought happy ending. How all the ill-informed opinions and misconceptions will be resolved, I will leave to the reader to discover, but Sylvester stands as one of my favorite Heyer novels and worthy of moving up your TBR list.

We received a review copy of the book from the publisher in exchange for an honest review. Austenprose is an Amazon affiliate. Cover image courtesy of Sourcebooks Casablanca © 2011; text Laurel Ann Nattress © 2010, austenprose.com. Updated 15 March 2022.

39 thoughts on “Sylvester, or the Wicked Uncle, by Georgette Heyer – A Review”