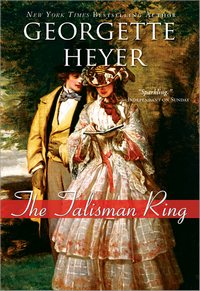 Guest review by Ana of An Evening at Almack’s

I have been a long time fan of Georgette Heyer. I first read some of books while a teenager in translated versions and now, as an adult, I have been collecting them in the original English thanks to Arrow and Sourcebooks who made them readily available everywhere.

The Talisman Ring was one of the books that I read more recently. A mixed story, part romance / part mystery, it sees two couples searching around for a family jewel to exonerate one of the heroes from a murder charge. To make a long story short, Sir Tristam Shield and Eustacie de Vauban are ordered by their great granduncle and grandfather respectively to embark on a marriage of convenience to guarantee Eustacie’s wellbeing and status in life after the old man dies. But Eustacie is a lively and romantic girl who finds Sir Tristam a stuffy unromantic old man and decides to run away to become a governess. On the road she finds her cousin Ludovic, her grandfather’s heir who has been on the run for the past two years after having been suspected of murdering a man on the night his favourite jewel – the talisman ring – disappeared. Ludovic is now a free trader, which seems utterly adventurous and romantic to Eustacie, and after an encounter with the excise men he is hurt and they find shelter at a nearby inn. There they find Lady Sarah Thane, a young woman who travels with her brother and seems to have an original sense of humour, and that’s where Sir Tristam eventually finds them. With Eustacie and Ludovic on their way to falling in love the four set out to find the jewel and prove his innocence.

I must admit that this is not one of my favourite Heyers. I think the story, as a mystery, looses pace because of the romance and all those secondary characters – the free traders, the excise men, the Bow Street Runners – and as a romance looses interest because so much time is devoted to finding the jewel. I think I am more used to those Heyer romances where we find sparkling and witty dialogue between the main characters, where the funny coincidences make for laugh out loud moments and where we have closure in the end. Here, although there are some funny moments they are not so sparkling and witty, and while the story ends with one couple engaged, the other doesn’t get the same king of closure, although everything indicates that they will do so too.

I did like Lady Sarah Thane and Sir Tristam Shield very much. To the point where I would have loved to have the book devoted solely to them. In a way, because they are an older couple they reminded me of Abby and Miles from The Black Sheep which I greatly enjoyed. If only we had seen more of them I am sure that we had been gifted with some witty dialogues. Eustacie seemed a bit too young and, well, silly. I have been fond of other young heroines like Horry and Leonie and I have forgiven them their silly naiveté because of their wonderful heroes but here I must confess that Ludovic was not a favourite with me either. He seemed impulsive and extravagant but oh so perfect for Eustacie who only wanted a husband to ride “ventre a terre” to her death bed.

But don’t be discouraged by my review, lots of Heyer fans seem to love this story so my advice to you is try it and see. There are a lot of farcical moments and if nothing else it will definitely put you in a good mood.

Ana has always been a reader. Her first love is historical fiction, be it romance, mystery or general fiction, if it’s historical she is happy! She also loves to discuss books with other readers and that’s why she started blogging. You can usually find her at one of the following blogs Aneca’s World, An Evening at Almacks , Historical Tapestry and Lights, Camera… History!. You can follow Ana on Twitter as Aneca.

30 thoughts on “The Talisman Ring, by Georgette Heyer – A Review”