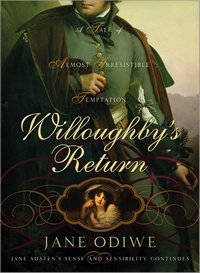 While the Jane Austen sequel industry abounds with numerous books inspired by Pride and Prejudice, regretfully there are very few sequels to Austen’s first published novel Sense and Sensibility. Why? Possibly because some readers have been disappointed with half of Austen’s unsatisfactory ending for her two heroines. While the two Dashwood sisters do marry: staid and stoic Elinor to Edward Ferrars and impulsive and free-spirited Marianne to Col. Brandon, the second pairings future happiness seemed doubtful. How could a young lady with Marianne’s intense passionate depth be happy with anyone other than her Byronic first love Mr. Willoughby – even after he threw her over for an heiress? Nagging questions arise. Did she settle when she married the Colonel? Would she be tempted into extramarital affairs and runaway with her lover? Possibly, leaving an intriguing premise for continuing the story.

All these concerns are addressed in Willoughby’s Return: A Tale of Almost Irresistible Temptation a new sequel to Sense and Sensibility by Jane Odiwe. How, or if they will be resolved to our satisfaction is now a possibility.

Three years after her marriage to Colonel Brandon, Marianne is the mistress of Delaford Park and the mother of a young son James. She has everything that a young married woman could desire: wealth, position, an heir and a loving husband, but her insecurities, jealousy and impetuous nature rob her of complete happiness. Resentful that her husband is frequently called away to attend his ward Eliza Williams and her infant daughter, Marianne “feels” that he cares for his other family more than his own. Their ties to the Brandon’s are strong and painful; Eliza being the daughter of Brandon’s first love who died tragically, and Eliza’s young child Lizzie the illegitimate daughter of John Willoughby the rogue who also threw over Marianne’s affections for an heiress five years prior. In addition, there is that imposing portrait of Eliza’s mother hanging in the Hall staring down at her. Every time Marianne passes it she sees the similarities of their appearances and doubts more and more if Brandon married her because he loved her, of if she is replacing the woman that he loved and lost years ago. When the charming rogue John Willoughby reappears in her life proclaiming he has never stopped loving her, the pain of their failed romance is renewed gradually replaced by conflicting emotions and the temptation to be with him again.

We are reintroduced to many of the characters from the original novel: Elinor Ferrars and her husband Edward, Mrs. Jennings, the Middleton’s, Lucy Ferrars and importantly Elinor and Marianne’s younger sister Margaret Dashwood who has her own romance in the course of the novel that may equal Marianne’s dilemma in emotion and drama. It could not be a Jane Austen sequel without talk of beaus, gowns and a glamorous Ball, so imagine everything most “profligate and shocking” in the way of young couples dancing and sitting down together! Margaret Dashwood supplies the shocking (to the horror of the neighborhood biddies) in her behavior by dancing more than three times in one night with one partner, Henry Lawrence, the charming and bold nephew of Col Brandon. Like Willoughby, Henry appears to be a good catch: attractive, well connected, an heir to a fortune and too irresistible. He wastes no time in pursuing Margaret’s affections. There is a surprise twist to their relationship that I will not reveal, but readers might recognize similarities to another Austen heroine.

Odiwe has captured Marianne’s spirit superbly. Romantic, impulsive and let’s face it, high maintenance! At times I really wanted to give her a firm dressing down and felt the same of Austen’s younger Marianne, so I knew that Odiwe had connected their characteristics seamlessly. Marianne may be five years older, but she’s still Marianne the drama queen and that makes for great entertainment! Interestingly, the two men in her life, Brandon and Willoughby, had fewer scenes than expected but caused many reactions to fuel the narrative serving their purpose. This was a nice mirror to women’s fate in Regency times. Men have all the power, women all the presence.

This is Odiwe’s second Austen sequel, and like Lydia Bennet’s Story she has chosen a character in Marianne Brandon that is ruled by impulse and emotion making for surprise and tension – all good elements to an engaging story that she delivers with confidence and aplomb. Developing younger sister Margaret Dashwood brought youth, vivacity and a bit of rebellion against social dictums to the story. Her romance with Henry Lawrence was an excellent choice as she shared the narrative equally with Marianne and balanced the story. Odiwe’s research and passion for the Regency era shine, especially in her descriptions of the country fair and fashions. It is rewarding to see her develop her own style evocative of Austen but totally modern in its sensibility. There were a few missteps with cadence and vernacular, but I am splitting hairs, and few will notice. Of course we are never in much doubt that it will all end happily, but unlike Jane Austen’s tale, the final transformation of the heroine’s troubling want of caution and choice of spouse will not prompt debate two hundred years later.

A light and enjoyable read, Willoughby’s Return is a charming tale that sweeps you back into Austen’s mannered world of a young girl searching for love and a married woman realizing it.

10 thoughts on “Willoughby’s Return, by Jane Odiwe – A Review”