It’s that time of year again when the holiday spirit takes hold and I am compelled to read Christmas stories in between shopping and baking. I especially appreciate short stories during this busy time and there are a lot of historical anthologies to choose from along with novellas, and novels to get me in the mood and distract me from the craziness at work and home. Here are twelve books in my personal collection set in Regency and Victorian times that Jane Austen and historical romance readers will devour. Be sure to add to them to your #TBRpile. You won’t regret it.

Make some time in your busy holiday schedule for yourself with a cup of tea, Christmas cookies, and this delightful short story collection by four bestselling historical romance authors that will sweep you away and into the Regency ballrooms of London, to Scottish castles, and to the Gilded Age New York. I always enjoy Tessa Dare’s novels and the other three authors are at the top of their game too.

“Meet Me in Mayfair” by Tessa Dare

Louisa Ward needs a Christmas miracle. Unless she catches a wealthy husband at the ball tonight, the horrid, heartless Duke of Thorndale will evict her family from their beloved Mayfair home. But when her friend begs to switch dance cards, Louisa finds herself waltzing with the enemy: the horrid, heartless–and unexpectedly handsome–Thorndale himself. Now the duke’s holding her future in his hands…and he’s not letting go. END_OF_DOCUMENT_TOKEN_TO_BE_REPLACED

What would Jane Austen say and do if she lived in the 1920s instead of the late 1700s/early 1800s? Would she wear a drop-waist dress that showed her ankles and bob her auburn hair? Would she dance the Charleston or listen to Jazz music? How would she react to being called ‘baby doll’? And would being handed into the front seat of a car by a young, eligible man just as romantic as being handed into a Regency carriage? These fascinating questions and more are imaginatively answered in Jane Odiwe’s latest novel, Jane Austen Lives Again, where readers—and Jane Austen herself—are transported to the chaotic, electrifying Jazz Age.

1817: After days of sickness, Jane Austen closes her eyes on this world for the last time. Or so she thinks. When she opens them again—to her, only a few moments later—her doctor informs her that he found the secret to immortal life, and the year is… END_OF_DOCUMENT_TOKEN_TO_BE_REPLACED 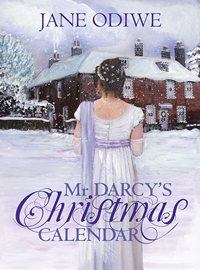 I have often thought of Pride and Prejudice as the ultimate fairy tale. While it does not have the traditional folkloric fantasy figures such as dwarves, fairies or giants, Jane Austen did create iconic romantic characters that have become prototypes for modern writers and a plot that includes the perfect happily-ever-after ending. It is easy to see why we want to return to that fantasy and live in the era with her characters again and again through new stories.

Austenesque author Jane Odiwe has written two Austen-inspired novels with strong fantasy elements: Project Darcy and Searching for Captain Wentworth. She has a particular talent for time-slip novels where a modern heroine, like her fairy tale compatriots—Sleeping Beauty, Cinderella or Belle in Beauty and the Beast—are touched by a magic that changes their lives, setting them on a course of discovery and romance. Her latest is a novella, Mr. Darcy’s Christmas Calendar, is set during the holiday season in modern day and Regency England. Jane has generously supplied an exclusive excerpt of her new work. I hope you enjoy it.

A novella for the Christmas holidays – Lizzy Benson visits Jane Austen’s house in Chawton, and buys a special advent calendar in the gift shop, but strange things start to happen when she opens up the first door and finds herself back in time with all the beloved characters from her favourite book, Pride and Prejudice. As she finds herself increasingly drawn into an alternate reality, Lizzy discovers not only is Mr Darcy missing from the plot, but Jane Austen has never heard of him. All Lizzy can hope is that she can help to get the story and her own complicated love life back on track before Christmas is over!

END_OF_DOCUMENT_TOKEN_TO_BE_REPLACED 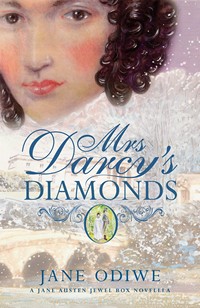 We are very happy to introduce you to Austenesque author Jane Odiwe’s new novella called Mrs. Darcy’s Diamonds, just published last month by White Soup Press. Jane tells me that she loves Georgian-era jewellery, and thought it might be fun to write a series of books with a jewellery theme, and have every piece different. She imagined there would be some family jewels at Pemberley, and that a ring given to Elizabeth by Mr. Darcy could help create much tension and drama for a wintry tale.

Elizabeth is newly married to Fitzwilliam Darcy, the richest man in Derbyshire, owner of a vast estate, and master of Pemberley House. Her new role is daunting at first, and having to deal with Mr Darcy’s aunt, Lady Catherine de Bourgh, is a daily challenge. But, Elizabeth is deeply in love and determined to rise to every test and trial she is forced to endure. When her husband presents her with a diamond END_OF_DOCUMENT_TOKEN_TO_BE_REPLACED 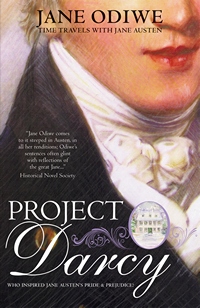 There’s one thing that’s true about Janeites – we love a good romance. Whether it’s a couple exchanging glances nearly two hundred years ago or a modern guy and gal sharing their first kiss on the streets of London, there’s something so magical about experiencing the feeling of falling in love… even if we’re only reading about it. In her new novel, Project Darcy, Jane Odiwe combines love stories from the past and present to give us an interesting spin on the life of Jane Austen.

When Ellie Bentley agrees to volunteer for an archeological dig at the site of Jane Austen’s childhood home in Steventon Rectory, she’s looking forward to spending a nice summer with her four closest friends – Jess, Martha, Cara, and Liberty. But almost as soon as she arrives, Ellie starts to see strange things: a man who looks just like he could be the ghost of Mr. Darcy and visions of a romance that happened 200 years ago. As the days pass and Ellie learns more about the secrets of Steventon, she gets drawn deeper and deeper into the life and loves of Jane Austen.

Meanwhile, the five friends are finding that their lives are playing out just like one of Austen’s romances. A handsome Oxford student named Charlie Harden has his eye on Jess, while Ellie is convinced that his friend, Henry Dorsey, is the most arrogant man who ever lived. Cara and Liberty are busy flirting with anyone and everyone in their path – even Greg Whitely, a gorgeous TV star who might not be as charming as he seems. Could the visions that Ellie keeps seeing hold the key to figuring out all their modern-day romantic entanglements?

Project Darcy is a bit of a literary mash-up. It’s a part modern retelling of Pride and Prejudice and part Austen-inspired magical realism. Not only is Ellie on a journey to find her own Mr. Darcy, but she also has the ability to see into important moments from Jane Austen’s past. While this idea is really interesting and has a lot of potential, in the end, the book sometimes struggled to bring the two stories together. END_OF_DOCUMENT_TOKEN_TO_BE_REPLACED

80 comments were left qualifying those who participated in the giveaway of the two gift packs from author Jane Odiwe in celebration of the release of Project Darcy. The winners drawn at random are:

Gift Pack 2 (one 16.5” x 11.7” signed, original art print by Jane Odiwe of Steventon Rectory and one pack of 6 holiday cards in two designs)

Congratulations ladies! To claim your prize, please contact me with your full name and address by November 20, 2013 or you will forfeit your prize! Shipment internationally.

Thanks to all who left comments, to Jane Odiwe for sharing an excerpt of her novel and for the gift packs for giveaway.

Fall is always a peak season for great novels in publishing so I am happy to host the virtual book launch party of Project Darcy, by popular Austenesque novelist Jane Odiwe. In celebration Jane has kindly shared an exclusive excerpt of her new novel with our readers.

Please enter a chance to win one of two gift packs available, including a copy of the book, prints of Jane’s wonderfully enchanting artwork and note cards, by leaving a comment below this post. Details for the giveaway are listed at the bottom. Good luck to all!

Laurel Ann, I am so excited to be here as a guest to launch my new book, Project Darcy – thank you so much for inviting me to celebrate today and share an exclusive excerpt!

The 200th anniversary of Pride and Prejudice has been a special year for Jane Austen’s wonderful book, and I couldn’t let it go by without celebrating it myself with a new novel!

Five friends who have recently finished university, volunteer for an archaeological dig at Jane Austen’s childhood home in Steventon, Hampshire. Ellie, Jess, Martha, Cara and Liberty, are all excited to go on the trip for very individual reasons – Ellie is an illustrator and loves painting landscapes, Jess is obsessed with Jane Austen’s books, Martha is keen to indulge her interest in archaeology, and Cara and Liberty can think of nothing but the guys they might meet and the possibility of starring in the documentary that’s going to be made. END_OF_DOCUMENT_TOKEN_TO_BE_REPLACED