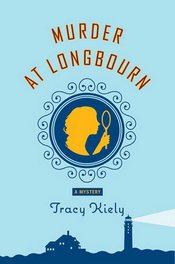 Fall is in the air, and if you are looking for a great new murder mystery novel to cozy up with, Murder at Longbourn by Tracy Kiely is an excellent choice. Cleverly combining a traditional drawing room detective story and a comedy of manners, this surprisingly witty and beguilingly suspenseful whodunit is actually a contemporary chick-lit romance detective story. Whaaat? you say? Yes, that’s right. Just think of Pride and Prejudice meets Ten Little Indians meets Bridget Jones’ Diary and you will get my drift.

Singleton Elizabeth Parker has just dumped her two-timing boyfriend and accepted an invitation from her eccentric Aunt Winnie to help host a theatrical “Murder Mystery Party” on New Year’s Eve at her new Cape Cod B&B, amusingly named The Inn at Longbourn in honor of Elizabeth and her aunt’s affinity to all things Austen. When Elizabeth arrives and discovers that her aunt has employed her childhood nemesis Peter McGowan to help run the Inn, she is less than pleased at the prospect of meeting him again. Their awkward reunion reminds Elizabeth of painful memories as an over-weight, buck-toothed ten-year-old tormented and locked in a basement with the spiders. Bruised ego throbbing, Elizabeth endeavors to subdue her anger and Bridget Jonesish self-deprecating insecurities by chanting aphorisms: “I will have inner poise. I will not let Peter McGowan get under my skin. I will not allow myself to be locked in a dark basement. I will have a calm and relaxing New Year’s.” Peter, on the other hand, is just too broodingly arrogant to believe in inner reproach.

The New Year’s festivities are going well until the “Murder Mystery” party turns deadly when one of the guests becomes a body in the library so to speak. The local police suspect everyone in attendance, and especially Elizabeth’s aunt Winnie who has means, motive, and opportunity to do the deed. To clear her aunt as a prime suspect Elizabeth must become an amateur sleuth discovering clues and following leads to uncover the back story of the relationships of the guests. Odious Peter, the last man in the world whom she could ever be prevailed upon to ask for help turns out to be not such a shmuck, after all, once Elizabeth moves beyond her prejudices and Peter his pride! Hmm? Sound familiar?

In the tradition of the popular Stephanie Barron Jane Austen mystery series, Murder at Longbourn is a cleverly crafted mystery infused with endearing characterizations and a satisfying romance. Janeites will be thrilled with all of the Pride and Prejudice lore as they encounter references to shelves in the closet, a snooty cat named Lady Catherine, and a hero and heroine that mirror Austen’s protagonists Lizzy and Darcy. Mystery novel lovers will be enthralled with the large cast of possible suspects, a minefield of clues, and the great red herrings are thrown in to keep them guessing until the very end. Unfortunately,  I did have a difficult time keeping track of the multiple characters introduced at the beginning of the book who soon fade away, and much to my disappointment as the pages progressed the story became more reminiscent of Agatha Christie than Jane Austen. Not to worry. These flaws are minor quibbles in comparison to its burgeoning charms.

Once in a great while, I have the pleasure of having my bonnet blow off by a new author from the left field. Kiely has crafted a winning combination of cozy mystery and Austenesque wit, and I hope that she finds her audience. I am looking forward to solving another murder mystery with Elizabeth Parker when the next book in the series, Murder on the Bride’s Side, arrives next year. Let’s hope her publisher gives it a more attractive cover.

20 thoughts on “Murder at Longbourn, by Tracy Kiely – A Review”