Who would want to bludgeon to death a humble country charwoman? Suspicions lead Superintendent Spence (Richard Hope) to conclude that her dodgy tenant James Bentley (Joe Absolom) who has fallen on hard times was motivated by theft to commit the crime. After Bentley is convicted and sentenced to die by the gallows, things still do not seem quite right, and he calls upon Hercule Poirot (David Suchet), the greatest detective in the world to confirm his doubts and help him discover the real murderer, as Masterpiece Mystery continues with Agatha Christie’s, Mrs. McGinty’s Dead on PBS.

Poirot travels to Broadhinny, a country village to investigate the scene of the crime meeting his friend Ariadne Oliver (Zoe Wanamaker) the novelist visiting a local playwright Robin Upward (Paul Rhys) who is adapting her novel into his next play. Poirot begins by interviewing all of Mrs. McGinty’s family and work connections. Even though she led a simple life, she worked for many wealthy residents in the village with secrets to hide. What did she discover that was so important that would prompt her murder? When Poirot inspects the remains of her personal belongings, he discovers a recent Sunday paper with an article cut out on the whereabouts of two women involved in separate murders from thirty years ago. One picture is of a young child Lily Gamboll, and the other of a young woman Eva K

ane. Which woman in the village could each of these women be? There are plenty of red herrings appearing before Poirot uses all of his little grey matter and discovers the identity of the real murderer.

This second Poirot episode of the Masterpiece Mystery season had been adapted for the screen from Agatha Christie’s 1952 novel by Nick Dear who brought us the incredibly moving adaptation of Jane Austen’s Persuasion in 1995. Riding on that cloud of glory, I expected the same sensitivity and nuances that he had delivered previously in this new production. The result was quite the opposite. I may be comparing apples to oranges with genres, but his choices in pacing and dialogue had me confused and replaying certain parts of the DVD screener over again. Because of the layered affect of Christie’s plots, if you miss one clue, the next does not make sense. Ah, mon ami, I may be being too critical of Mr. Dear, since producers and directors do not always shoot the script that was presented to them. 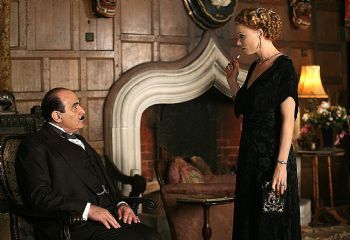 As always, the production values were outstanding. The costumes, locations and cars, yes the vintage cars, were just stunning. The large cast was quite impressive and I particularly appreciated the performances of Siân Phillips as Mrs. Upward, Zoë Wanamaker as Mrs. Oliver and Amanda Root as Shelagh Rendell. Viewers might recognize these three British actresses from their roles as Madame de Volanges in Valmont (1989), Madame Hooch in Harry Potter and the Sorcerer’s Stone (2001) and Anne Elliot in Persuasion (1995) respectively.

Masterpiece Mystery continues next Sunday July 5th with A Pocket Full of Rye with Julia McKenzie, in her premier as Miss Marple, Christie’s famous elderly spinster amateur detective whose deductive skills are as sharp as her knitting needles.