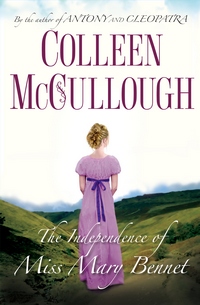 The Austen book sleuth is happy to inform Janeites that Austen inspired books are heading our way in December, so keep your eyes open for these new titles.

The Independence of Miss Mary Bennet: A Novel, by Colleen McCullough. When best selling author of the Thorn Birds and The Masters of Rome Series Colleen McCullough saw the Pride and Prejudice miniseries on television recently she was intrigued by the Bennet’s middle daughter Mary and how Austen unsympathetically portrayed her. Inspired to give Mary a new chance, McCullough starts the story twenty years after the close of Pride and Prejudice with the death of Mrs. Bennet freeing Mary from her role as parental caretaker. Bookish, pious and socially awkward Mary gets a makeover, a social cause, and a romantic adventure. (let’s hope she doesn’t sing) From the advance press when the book was released in Australia in October, we may very well be in for a very bumpy ride. Hardcover, Simon & Schuster (December 30, 2008). ISBN: 978-1416596486

The Little Book of Jane Austen, by Emily Wollaston. This petite volume offers an introductory biography to the author’s life, her works, the television and movie adaptations, celebrations, and the Jane Austen Society with photos of her homes, countryside and towns she visited, and generally all the highlights to entice the reader to read a book, watch a movie or visit her on the Internet. A great stocking stuffer for the holidays, or a gift to include with one of her novels. Green Umbrella Publishing. ISBN 978-1906229580

The Later Manuscripts, (The Cambridge Edition of The Works of Jane Austen), edited by Janet Todd. Serious students of Austen will be happy to hear that this new volume brings together for the first time all of the literary manuscripts from Jane Austen’s adult years (with the exception of the canceled chapters from Persuasion) and includes the novella ‘Lady Susan’, the novel fragments of ‘The Watsons’ and ‘Sanditon’, poems and charades, and the comic ‘Plan of a Novel’ and various other novelties. I can not deny that it is remarkable to have everything in one place at last, but only deep pockets will be able to acquire this volume at $130.00. Unless I win the lottery, I hope to borrow it from inter-library loan. Cambridge University Press. ISBN: 978-0521843485

The Cambridge Edition of the Works of Jane Austen 9 volume HB set (The Cambridge Edition of the Works of Jane Austen), edited by Janet Todd. Wow, wow and double wow! My hat is off to Janet Todd and Cambridge University for completing nine volumes of scholarship devoted entirely to Jane Austen. This may very well be the mother lode of Austen information compiled by leading scholars available today. The nine volumes include an annotated edition each of the six major novels and Juvenilia, The Later Manuscripts mentioned above, and Jane Austen in Context. Even though Cambridge has reduced the price when you purchase this as a set, it is still a hefty chunk of change at $900.00. Cambridge University Press. ISBN 978-0521868402

Do you remember this passage in Northanger Abbey defending novel reading?

“And what are you reading, Miss – ?” “Oh! It is only a novel!” replies the young lady, while she lays down her book with affected indifference, or momentary shame. “It is only Cecilia, or Camilla, or Belinda”; or, in short, only some work in which the greatest powers of the mind are displayed, in which the most thorough knowledge of human nature, the happiest delineation of its varieties, the liveliest effusions of wit and humour, are conveyed to the world in the best-chosen language.” The Narrator, Chapter 5

Here’s your chance to find out what Austen was defending with these two reprints of important late eighteenth-century novels that Jane Austen read and influenced her writing reissued by Oxford University Press.

Cecilia, or Memoirs of an Heiress (Oxford World’s Classics), by Frances Burney. (publishers description) Cecilia is an heiress, but she can only keep her fortune if her husband will consent to take her surname. Fanny Burney’s unusual love story and deft social satire was much admired on its first publication in 1782 for its subtle interweaving of comedy, humanity, and social analysis. Controversial in its time, this eighteenth-century novel seems entirely fresh in relation to late twentieth-century concerns. Oxford University Press. ISBN: 978-0199552382

Evelina (Oxford World’s Classics), by Frances Burney. (publishers description) Frances Burney’s first and most enduringly popular novel is a vivid, satirical, and seductive account of the pleasures and dangers of fashionable life in late eighteenth-century London. As she describes her heroine’s entry into society, womanhood and, inevitably, love, Burney exposes the vulnerability of female innocence in an image-conscious and often cruel world where social snobbery and sexual aggression are played out in the public arenas of pleasure-gardens, theatre visits, and balls. Oxford University Press. ISBN: 978-0199536931

Until next month, happy reading to all,

3 thoughts on “Jane Austen Book Sleuth: New Books in the Queue for December 2008”