To be disgraced in the eye of the world, to wear the appearance of infamy while her heart is all purity, her actions all innocence, and the misconduct of another the true source of her debasement, is one of those circumstances which peculiarly belong to the heroine’s life, and her fortitude under it what particularly dignifies her character. Catherine had fortitude too; she suffered, but no murmur passed her lips. The Narrator, Chapter 8

A return to the Upper Rooms with Mrs. Allen fuels Catherine’s hopes of seeing Mr. Tilney again. Coy Isabella declines a second invitation to dance from James Moreland claiming it improper to dance two in a row, and then dances anyway. Regretfully, Catherine declines Mr. Tilney’s offer to dance due to John Thorpe. Mortified, she sees Tilney dancing with another and learns later that he was looking for her. The evening ends unsuccessfully. The next morning John Thorpe’s unexpected arrival and claim that she had promised to ride out with him that day meets with surprise. They drive in his gig, with James and Isabella in their own. He boastfully discusses his equipage and horse and makes candid remarks about the safety of James’ carriage which alarm Catherine. He discredits her concerns. Catherine is puzzled by the double talk, returning home to discover she has missed another opportunity to see the Tilney’s. The Allen’s, the Thorpe’s and the Morland’s attend the theatre. Catherine searches in the crowd for Mr. Tilney but no luck. Isabella tells Catherine that she and James agree on everything, but the next day she sees them together at the pump-room in dispute, contrary to her claim. She meets Eleanor and quizzes her about her brother, revealing her interest in him. She attends the Cotillion and finally dances with Mr. Tilney. He discusses his views on dancing and marriage, living in the country or in town; points out his father the General, and invites her for a country walk the next day.

I was amazed how Jane Austen paced chapter eight writing ups and downs for our heroine in the making. I laughed at her expense when she was “disgraced in the eye of the world not unlike a true heroine” when left with the matrons, Mrs. Allen and Mrs. Thorpe at the dance while Isabella was engaged with her brother. What single young lady has not attended a dance and been mortified to be a wall flower? Ha! And then the thrill of seeing Mr. Tilney, finally, after searching and fretting over him for a week. What a rush!

Catherine, catching Mr. Tilney’s eye, instantly received from him the smiling tribute of recognition. She returned it with pleasure, and then advancing still nearer, he spoke both to her and Mrs. Allen, by whom he was very civilly acknowledged. “I am very happy to see you again, sir, indeed; I was afraid you had left Bath.” He thanked her for her fears, and said that he had quitted it for a week, on the very morning after his having had the pleasure of seeing her. The Narrator Chapter 8

Then her hopes (and ours) to dance and talk with him are delayed when she must decline his invitation to dance because of her prior acceptance of that clown John Thorpe, only to see him recover quickly and dance with Miss Smith. How crushing! Meeting Eleanor Tilney is a windfall though, so she is happy again, and so are we. What girl has not used a sister to acquire information and access to a brother? Even young naïve Catherine knows how that works! But no further chances to meet or dance with Mr. Tilney present themselves. Yet another missed opportunity for Catherine, and the evening ends unsuccessfully (well almost).

Isabella and John Thorpe are continually a ‘rattle’ to Catherine (and us). Their choice of language, style of communication and actions are in opposition to what they say and do. For instance, Isabella tells James Morland that she should not dance a second with him, and says she will not, then three minutes later does so anyway. John Thorpe arrives unannounced expecting Catherine to ride out in his gig claiming she has forgotten the invitation. Personally, I find this unsettling for our heroine and for myself in real life, and I believe that Austen is cleverly using this to raise our emotions; – for nothing gets my dander up faster than being accused of forgetting or not acknowledging civility. In addition, during the carriage ride with Thorpe he boasts about his gig and horse and alarmingly tells Catherine that her brother’s “little tittuppy” carriage could fall apart at any moment. Distressed for their safety, she entreats him to stop to alert them and is met with this immediate dismissal.

Catherine listened with astonishment; she knew not how to reconcile two such very different accounts of the same thing; for she had not been brought up to understand the propensities of a rattle, nor to know to how many idle assertions and impudent falsehoods the excess of vanity will lead. Her own family were plain, matter-of-fact people who seldom aimed at wit of any kind; her father, at the utmost, being contented with a pun, and her mother with a proverb; they were not in the habit therefore of telling lies to increase their importance, or of asserting at one moment what they would contradict the next. The Narrator, Chapter 9

Even though Catherine is inexperienced, we do see that she has some common sense and recognizes the signs of concern. She just has not yet developed the ability to oppose such wild talk, or to discredit and remove herself from bad influence. This is all part of the growing process of first experiences away from the protection of home, and into society populated by those who not only do not always have her best interests at heart, but are grubbing for their own advancement through her.

When Catherine returns home after the carriage ride she learns that she has missed yet another opportunity to see the Tilney’s when Mrs. Allen encountered them while walking on the Crescent that day. She is beginning to regret her connection to the Thorpe’s. They say but do the opposite and keep her from the Tilney’s whose company she does not know quite as well, but is drawn towards as a more genteel choice. When Catherine meets Eleanor for the first time, this description of her is quite revealing as to Austen’s intension for the character.

Miss Tilney had a good figure, a pretty face, and a very agreeable countenance; and her air, though it had not all the decided pretension, the resolute stylishness of Miss Thorpe’s, had more real elegance. Her manners showed good sense and good breeding; they were neither shy nor affectedly open; and she seemed capable of being young, attractive, and at a ball without wanting to fix the attention of every man near her, and without exaggerated feelings of ecstatic delight or inconceivable vexation on every little trifling occurrence. The Narrator Chapter 8

Eleanor is obviously a refined young lady not needing to “fix the attention of every man near her“, the exact opposite of Isabella who wants Catherine and herself to dress alike, strut about the pump-room, and follow young men down streets for attention. We begin to see a change in her attitude toward the Thorpe’s when she attends the Cotillion dance and is determined to avoid John Thorpe in fear that he will ruin her chances again with Mr. Tilney. She manages to maneuver around him for half the night, but alarmingly, no Mr. Tilney. And then, he is there!

With what sparkling eyes and ready motion she granted his request, and with how pleasing a flutter of heart she went with him to the set, may be easily imagined. To escape, and, as she believed, so narrowly escape John Thorpe, and to be asked, so immediately on his joining her, asked by Mr. Tilney, as if he had sought her on purpose! – it did not appear to her that life could supply any greater felicity. The Narrator, Chapter 10

When Mr. Tilney finally presents himself asking Catherine to dance she is overjoyed and thinks she is safe from John Thorpe, but no. He continues to torment her while dancing, chiding her about dancing with another, quizzing her about her partner, and wondering if he would like to buy a horse! Is this guy a buffoon or what? Her first instincts about him were correct and she has every right to be alarmed by his bad behavior and wild talk. Henry to the rescue! He does not like Thorpe’s manners either, and recognizing his gall in detaining her away from his rightful attention while dancing. What follows is a witty repartee with Henry and Catherine, (mostly Henry) that is Jane Austen at her most clever and obliging.

“I consider a country-dance as an emblem of marriage. Fidelity and complaisance are the principal duties of both; and those men who do not choose to dance or marry themselves, have no business with the partners or wives of their neighbours.” Henry Tilney, Chapter 10

“And such is your definition of matrimony and dancing. Taken in that light certainly, their resemblance is not striking; but I think I could place them in such a view. You will allow, that in both, man has the advantage of choice, woman only the power of refusal; that in both, it is an engagement between man and woman, formed for the advantage of each; and that when once entered into, they belong exclusively to each other till the moment of its dissolution; that it is their duty, each to endeavour to give the other no cause for wishing that he or she had bestowed themselves elsewhere, and their best interest to keep their own imaginations from wandering towards the perfections of their neighbours, or fancying that they should have been better off with anyone else. Henry Tilney, Chapter 10

“In one respect, there certainly is a difference. In marriage, the man is supposed to provide for the support of the woman, the woman to make the home agreeable to the man; he is to purvey, and she is to smile. But in dancing, their duties are exactly changed; the agreeableness, the compliance are expected from him, while she furnishes the fan and the lavender water. Henry Tilney, Chapter 10

I can not follow THAT, with anything pithier, and will sign off with a sigh, in hopes of further encounters with the charming Mr. Tilney as they walk out into the country as planned for the next day. 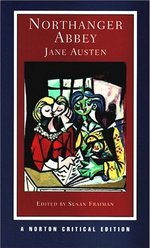