In Jane Austen’s Pride and Prejudice, Miss Anne de Bourgh is known only as the sedate and sickly shadow of her mother, Lady Catherine’s, condescending and loudly opinionated character. The heiress of Rosings Park in Kent, Miss de Bourgh was intended from infancy—as a favorite wish of both her mother and her aunt—to marry her first cousin, Mr. Fitzwilliam Darcy of Pemberley in Derbyshire, thereby uniting two grand fortunes and estates. But when Mr. Darcy ultimately marries that obstinate, headstrong Miss Elizabeth Bennet instead, what is to become of Miss de Bourgh? This is one of many questions explored in Molly Greeley’s fascinating second Pride and Prejudice variation, The Heiress: The Revelations of Anne de Bourgh.

Anne de Bourgh was a wretchedly inconsolable infant. Her parents and nurse were therefore quite thankful for the medical intervention when the local doctor prescribed a dose of sleep-inducing laudanum and declared that she would always possess a delicate constitution. Consequently, Anne spends her formative years receiving twice-daily doses of her magic drops that keep her in a permanent state of lethargy. “My medicine turned me stone-heavy, a breathing statue, eyelids drawing down despite all my best efforts and thoughts drifting like milkweed fluff.” (118)

Under her mother’s formidable thumb, Anne drifts through her days in a stupor, confined to the house and gardens, wearing only what her mother selects, eating little but what her mother approves and her weak appetite allows, not permitted to dance or sing or play an instrument, and restricted from learning or reading too much. All are convinced that she is far too frail to do much of anything at all but simply exist. “If I had a shell like the snail, I thought, I would tuck myself back inside of it, away from their branding pity. I felt at once all-too-visible in my fine gowns and gaudy bonnets, and ill-defined as the edges of a ghost.” (316)

Anne is merely a detached observer of her own life, her languorous health slowly turning to vivid hallucinations. Despite her governess’s insistence that she could aspire to be so much more than what she has settled for, “if you did not stun yourself so thoroughly with your medicine” (1171), Anne continues to see herself as she has long been trained to. “Useless, I whispered inside my head, little mortified arrows that pierced my softest inner places. Useless, stupid, useless.” (1188) END_OF_DOCUMENT_TOKEN_TO_BE_REPLACED 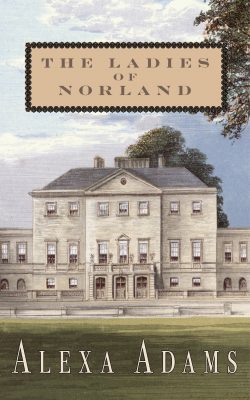 For several years beguiling authoress Alexa Adams has enjoyed warping our comfortable and familiar Jane Austen stories into quick, deliciously revolting variations that readers can experience with a tingling sort of shock at the new outcome. Her cold, conniving Jane Bennet, in Jane and Bingley: Something Slightly Unsettling (2013), to a pitiable Mrs. Norris in Becoming Mrs. Norris (2014), left me properly aghast as the hair on my arms stood on end. For her latest Twisted Austen effort, The Ladies of Norland, she revisits the Dashwood family in Sense and Sensibility to give us an alarming ‘what if’.

When the invalid owner of Norland Park dies and leaves his estate in the hands of his nephew, niece, and their girls, he goes a step further to protect the female dependents. This is followed by Mr. Dashwood when he too passes on. Instead of being left bereft of a father, home, and future income depended on the dubious honor of a selfish, grasping brother and sister-in-law, they are heiresses and the Misses Dashwood of Norland.

Naturally, Mrs. John Dashwood nee Ferrars is chagrined but has not lost hope to fill her family’s coffers. She is determined to see her oldest brother Edward attached to the oldest Miss Dashwood. All seems to be going her way as the Dashwood ladies, Elinor, Marianne, and their mother are happy to have Edward as a dear friend and possibly more. Felicities are on the tips of many tongues until…

Surely, you can guess, dear friends, that there must be a monstrous twist of fate or this could not be a Twisted Austen tale. I have enjoyed each of the tales from when they started out on the author’s blog in installments and eventually were published. I like the quirky pleasure of seeing some of the worst imaginings in story variations and appreciate the author’s deft hand in making them in the style that is strongly Austen-flavored in the process which gives it more possibility and suspense. END_OF_DOCUMENT_TOKEN_TO_BE_REPLACED

Fall is here and Halloween is just around the corner as the next holiday to celebrate. To get in the mood I always like to re-read Northanger Abbey, Jane Austen’s Gothic parody, and a new Austen-inspired Gothic fiction. This year it will be Tempt Me, by Julie Cooper. It is a Pride and Prejudice variation with a paranormal twist. Get ready to meet vampire Darcy, again.

The vampire concept is not new to the Janeite fan fiction world. Austenesque authors have been putting this paranormal slant on Mr. Darcy (for good reason) since Amanda Grange’s, Mr. Darcy, Vampyre, was released in 2009. There have been others along this theme too: Pulse and Prejudice: The Confession of Mr. Darcy, Vampire, by Colette L. Saucier, Vampire Darcy’s Desire: A Pride and Prejudice Adaptation, by Regina Jeffers, and recently, Darcy’s Clan, by Lari Ann O’Dell. I see you rolling your eyes. Stop that. Darcy as a vampire is so sexy—a moody hot mess of uncontrollable desire.

I have not read this author before, but I was won over by the beautiful cover (I am so shallow. I do judge a book by its cover!) and the creative storyline. Austenprose is the last stop on the Tempt Me blog tour so let’s check it out. Here is the description from the publisher and an exclusive excerpt selected by the author. Enjoy!

It is a truth universally acknowledged that a single vampyre must be in want of a wife. Someone biddable, her memories easily expunged to allow for strange, inexplicable deeds and baffling circumstances. A tractable creature, of average intelligence, willing to attend to the business of producing heirs and keep out of all else. A girl easily moulded, incurious, indifferent, and demanding nothing beyond access to his fortune.

Fitzwilliam Darcy knows exactly who he needs. He can fix on the hour, the spot, the look, and the words which laid the foundation for an obsession he rejected. But ten years later, at an assembly in an obscure village in Hertfordshire, he finds himself in the middle once more.

His needs are unalterable. But can he resist the one woman he truly wants?

END_OF_DOCUMENT_TOKEN_TO_BE_REPLACED

Soon, All Hallow’s Eve will be upon us, when restless spirits of the dead are said to roam. What better time to pick up a gothic Austenesque novel centered around an ancestral family curse that continues to claim its victims? Beware, brave readers: this tome is not for the faint of heart. Several characters will not survive until the end of the story. (Cue creepy organ music, a bolt of lightning, and evil laughter!)

Diana Birchall’s latest, The Bride of Northanger, is a sequel to Jane Austen’s Northanger Abbey. In this case, General Tilney’s estate is the setting for melodramatic goings-on that are NOT the products of anyone’s imagination.

Catherine Morland – who becomes Catherine Tilney in the early pages here – is a year older and wiser. She has put aside silly gothic romances and instead reads more scholarly works. (There’s an interesting subtext here: her husband Henry is happy to see how educated she is becoming but, since she is a woman, there are limits on how much education is desirable in a wife.) Our more mature heroine is determined to control her imagination, though she still retains curiosity that must be satisfied. As she says, “I am no longer a fanciful girl, given to fears.” Her resolve is sorely tested throughout the book.

As the book opens, Henry reluctantly explains the superstitious rumor that the Tilney family is cursed. “…the race of Tilney might survive, but its fruitfulness be blighted forevermore. The wife of each firstborn son would die, either in terror or in madness, early in her life…” That doesn’t apply to Catherine since Henry isn’t the firstborn – his older brother Frederick is. But she’s no longer superstitious, so she’s not dissuaded anyway. END_OF_DOCUMENT_TOKEN_TO_BE_REPLACED

From the desk of Shelley DeWees:

Once as a child he’d had himself electrocuted to see how it would feel. He’d let the current course through him. He’d felt vibrant.

Perhaps he’d never been the same since, just full of sparks. Perhaps touching him she’d taken on some of his electricity, only instead of making her more alive, it had singed and dulled her.

Confident, theatrical, and opinionated, the genius anti-hero of Janet Todd’s novel—which is a departure from her well-known nonfiction work on Jane Austen and others—positively reeks of potential for unusual behavior, right from the start. He’s fussy and aloof; he gets upset if he is forced to walk through pale-colored soil in dark boots; he balks at teacups that are “coarse” or “thick” and favors a more delicate model of his own choosing. He is Byronically volatile and tense, but in Ann’s eyes, Robert James is the picture of perfection, a man she simply cannot ignore. Their first meeting at a party in 1816 leaves her reeling with a desire to hear more of his rhetoric, and to become familiar with his not-so-attractive yet completely arresting face—for this face, at that moment, becomes the face to Ann. “Robert James,” she acknowledges within five pages, “changed everything.”

And it’s true. At the beginning of the story, Ann St Clair is a different person. She’s plainly-dressed—relying as she does on her Gothic writings as her only source of income—and “not dissatisfied with her mode of life” in her small lodgings. Yet as soon as she connects herself to Robert James, she must change, first by demurring to his opinions of proper dress, and later, far more destructively, by abandoning her life in order to accompany him to Italy. This, in fact, is the point in the story where the relationship begins to degrade in haste: With one snide comment after another, one slight, one violent outburst, one mad musing after another, Ann and Robert James fall apart. Quality of life deteriorates for both of them, and in a long crescendo, we are swept to the inevitable conclusion of a relationship built on half-truths and unspoken grievances. Yet you need not worry that it will be predictable; rather, it’s quite surprising how it all shakes out in the end. END_OF_DOCUMENT_TOKEN_TO_BE_REPLACED