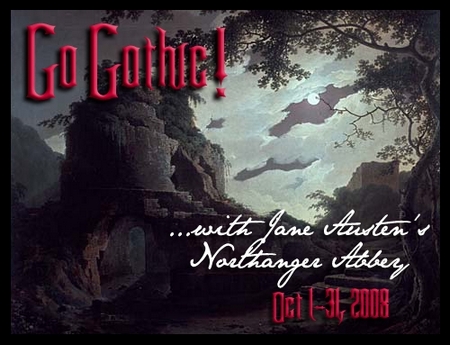 Hold on to your bonnets Janeites and Gothic literature fans, cuz Austenprose will be hosting another Austen novel event during the month of October, 2008 in honour of Jane Austen’s Gothic parody, Northanger Abbey. Please join the 31 day blog event and ‘Go Gothic with Northanger Abbey’ including a group read and discussion of Jane Austen’s novel Northanger Abbey , book and movie reviews, guest bloggers, and tons of free giveaways!

Here is a partial schedule of the upcoming fun

The complete reading schedule can be found here

OCTOBER 6: Amanda Grange, author of Mr. Darcy’s Diary and the four other retellings of Jane Austen’s novels from the hero’s perspective is currently writing the last novel in the series, Henry Tilney’s Diary. Read up on all the scoop on the progress on her writing about hero Henry Tilney, inarguably Austen’s most charming and daring wit! Amanda will share her insights on the current novel and include some highlights on scenes and dialogue in this preview of her fabulous new novel!

OCTOBER 13: Margaret C. Sullivan, author of The Jane Austen Handbook: A Sensible Yet Elegant Guide to her World, Editrix of AustenBlog, Tilneys and Trap-doors and Molland’s web sites will be discussing her admittedly partial, and totally prejudiced preference for Northanger Abbey’s hero Henry Tilney, and what makes him Jane Austen’s most dashing and quotable hunk.

OCTOBER 15: Kali Pappas, Austen fashion authority, web designer and web mistress of The Emma Adaptations Pages will be chatting with us about her favorite subject, fashion, in the two movie adaptations of Northanger Abbey. Find out what this Austenista has to say about all the elegant ball gowns and wild feathered bonnets in these two movie adaptations.

OCTOBER 20: James D. Jenkins, Gothic fiction authority and publisher of Valancourt Books will be discussing the history of Gothic fiction, renown authors of the genre and the seven novels included in the famous Northanger Cannon that character Isabella Thorpe recommends to heroine Catherine Morland in the novel Northanger Abbey, and the two books that they read, The Mysteries of Udolpho and The Italian. Find out for yourself if they are all as horrid as Isabella Thorpe claims them to be!

OCTOBER 27: Writer Trina Robbins, and illustrator Anne Timmons of Graphic Classics Volume 14: Gothic Classics, the graphic novel version of Northanger Abbey and The Mysteries of Udolpho will be talking about their experience adapting and illustrating Jane Austen’s novel Northanger Abbey. Learn all about this wonderful media for young adults and big adults too!

Don’t miss out on all the great reading, discussion

Go Gothic with Northanger Abbey! You won’t regret it!