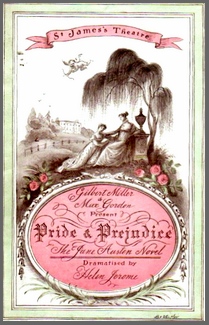 It is a truth universally acknowledged, that a single man in possession of a good fortune, must be in want of a wife. The Narrator, Pride & Prejudice, Chapter 1

The most universally acknowledged famous first line in literature to inspire the admiration and the imitation of the world. We can never have too much of a good thing.

In the beginning, – – Jane created six major novels, some minor works, poetry and family letters. For one hundred and twenty years we read and cherished her prose, having to be content with the real thing. And then, there was the adaptation; – – and Jane and her characters were reborn, and reborn, and yet again reborn. Today, Jane Austen is a hot property, but unfortunately not available for movie premiers!

One of the first major adaptations of Jane Austen’s work was a stage play of her most beloved novel Pride and Prejudice, written by Helen Jerome, entitled Pride and Prejudice: A Sentimental Comedy in Three Acts. It opened to critical acclaim at the Plymouth Theater on Broadway in New York city on November 5th 1935, and ran for 219 performances. Taking the leap across the pond to England, it premiered at the St. James Theatre in London in 1936 with a new British cast featuring Cecelia Johnson as Elizabeth Bennet. The new sets and costumes were by the renown designer and book illustrator Rex Whistler (1906-1944). The whimsical programme cover illustration is also by Whistler and is highly collectible by Jane Austen enthusiasts.

Wouldn’t our Jane be amused by the empire that she has inspired?

2 thoughts on “Pride and Prejudice: A Sentimental Comedy in Three Acts”