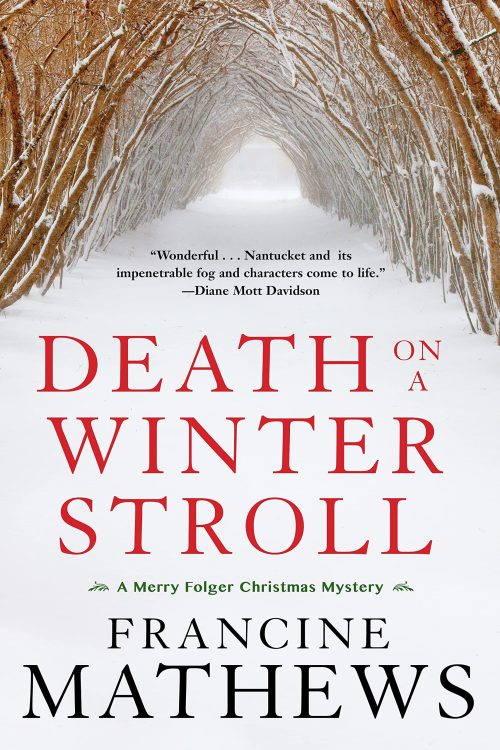 There’s always a little thrill of excitement that courses through me when I pick up a new to me series by an author with whom I’m happily familiar. Francine Mathews writes the clever and engaging historical Jane Austen Mysteries and I have long planned to pick up her contemporary Merry Folger Nantucket mysteries. With the added incentive of wintry holiday festivities as backdrop for a murder investigation, I got under my throw beside a cozy fire and let the book take me on the Winter Stroll and into a diverting mystery.

The Covid 19 pandemic shut down has just lifted. People are returning to their traditions including the new US president who came to Nantucket for his Christmas holidays. To accommodate the President wish that his new Secretary of State, Janet McKay, show she’s big on family togetherness, she has assembled an entourage including husband Ron, his son, Ansel, and her assistant, Micheline. As they land on Nantucket with gritted smiles and forced togetherness, Janet, the consummate career woman is prepared to show a good face as a family woman come home for the holidays. Ron will help, but Ance’s oddities have her a little nervous. Ominously, she thinks:

“A few days of cheer. Of family and relaxation. She would have to survive them somehow.” (15)

At the same time, Hollywood A list action star Chris Candler and his gorgeous daughter, Winter, arrive on Nantucket to join wealthy backer, Vic Sonnenfield and his wife, Carly who is making a police procedural series starring Chris, and the newly arrived Marni LeGuin with her dresser, Theo. Chris’ wife recently committed suicide and he hopes this trip will help Winter because he can tell that even with the therapy for her eating disorder, something else has her troubled. Undercurrents are already flowing viciously as the players eye their nearest and dearest as well as the rest of the actors and staff.

“And not to fret. If Vic tries anything in the night, I’ll kill him, shall I?” Marni’s stomach swooped to her knees. What did Theo know?” (22)

Not far away a reclusive bird enthusiast, photographer, and Instagram influencer is living on a derelict property biding her time photographing the local flora and fauna while seeming to be waiting for something to happen.

“Every third person in the crowd—and there were about ten thousand people in town jockeying for the best viewing spots—was dressed in ways bizarre or wonderful. The color and noise and exuberance were thrilling after the cheerless quarantine holidays, and Merry was grinning helplessly…The Town Crier hailed the boat, Santa waved, horns blared, the drum corps drummed. Merry and Peter and John whooped along with everyone else” (70-71)

Ansel and Winter, meeting and hitting it off, sharing burdens and therapy, were a bright spot in the murky landscape of murder that appeared about halfway into the book after all the character intros and murder plot set up occurred in a montage of shifting points of view.

Death Drops in for the Holidays

Sheriff Merry Folger and, particularly her husband Peter, share the spotlight with newly made detective, Howie Seitz. When the first death is reported, Merry gives the case to Howie and steps in to tag team with him when the Secretary of State’s party start throwing their status around and then the second death is discovered soon after with too much coincidence for them not to think the deaths are connected.

Like a tried-and-true detective mystery, Merry and Howie interview the witnesses, sift evidence, catch some discrepancies, or out and out lies, and go back to the group of witnesses and suspects to edge steadily closer to the truth. There were almost as many motives and opportunities as characters.

Francine Mathews made the characters and their situations, even the unlikeable characters personable, so I was able to connect with the story. I liked how there were several surprises in the plot twists, but also in some characters that I didn’t necessarily like in the beginning. The big money moment had me flipping pages rapidly hoping Merry and Howie would figure it out in time and the denouement brought it to a satisfactory end.

And, so, my first venture into the Merry Folger series was filled with layered, complex characters, a well-drawn Nantucket holiday time backdrop rich in local culture and tradition. It was seated in a clear-eyed contemporary Covid environment down to the protocol, worries and loss attached to the pandemic, a solid murder mystery plot, and good detective work building steadily to a smashing finish. Easy, entertaining, and engaging from cover to cover. Do yourself a solid and get it on Santa’s list. 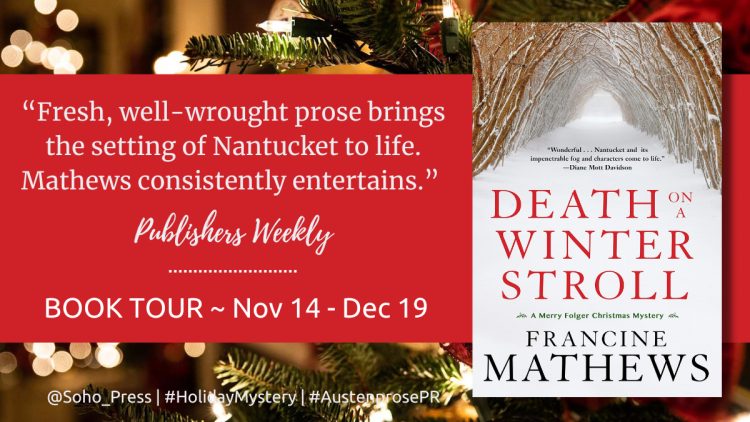 We received a review copy of the book from the publisher in exchange for an honest review. Cover image courtesy of Soho Crime © 2022; text Sophia Rose © 2022, austenprose.com, an Amazon affiliate.

6 thoughts on “Death on a Winter Stroll: A Merry Folger Christmas Mystery, by Francine Mathews — A Review”