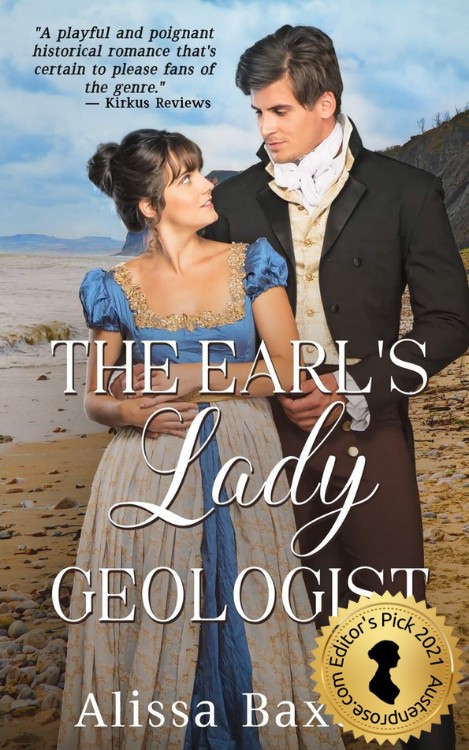 Miss Cassandra Linfield has been against marriage after seeing what it did to her dear mother. Lord Rothbury has loved, and then been rejected. Will two people so opposed to a romantic relationship be able to see that theirs was meant to be? In Alissa Baxter’s new release, The Earl’s Lady Geologist, a romance unfolds asking if the risks of love are outweighed by the rewards?

When I saw that this book was not only historical romance but also highlighted an actual woman from history, I knew I had to read it. More and more we are seeing the stories of women hidden from history. Reading a story that highlights a lady geologist sounded quite intriguing.

Cassandra is a lady who loves collecting fossils with her friend Mary Anning. She has lived a life in Lyme Regis free from the rigid rules of the ton. Her mother and father have passed away leaving her to the care of Cousin Agnes. A stuffier caretaker could not be found anywhere. Cassy has no plans to marry. She is quite content in her life of fossil collecting and research paper writing.

Lord Rothbury is a man of science. Geology is a passion of his that fits quite neatly into his structured life, and he plans to keep it that way. He has no space for sentimental fluff—especially after having been spurned by a lady in his younger days.

While collecting fossils on the beach with her friend Mary Anning, Cassy is approached by a gentleman with a piercing slate-grey gaze. Lord Rothbury has been sent by his mother to collect Cassie and bring her to London after receiving letters from Cousin Agnes about her traipsing all about the beach unaccompanied. Cassy has never met this ominous-looking man but has heard tales of the legendary Lord Rothbury. He is the son from her Aunt Ella’s first marriage. With her aunt now being married to her uncle, Sir Barnaby Linfield, it makes sense she would send for him to look in on her.

“And it is a truth universally acknowledged that a single lady in possession of a good fortune must be in no want of a husband.” (14)

London life is not at all what Cassy has wanted, but she has promised to try to make the best of it. Although her father taught her everything he knew about geology, women are not accepted into the Geological Society. Lord Rothbury and his half-brother James have enlisted her help as a sketch artist and advisor—and it does make her happy—but it also complicated things. Assisting Rothbury is making her dream of a life she has never wanted.

“He gave a shout of laughter. ‘The best laid plans of mice and men, oft go astray.’ I would advise you to remember that, Linfield Mouse.” (52)

Lord Rothbury is a man of action. He is well known in the geology community and takes pride in his collection. His duties to his title and family, along with his hobby, are quite enough to keep him busy. Having loved and been spurned, he sees no need to open his heart again. He realizes that Miss Cassandra Linfield would be a great asset to his geological research and is quite a nice companion, now that he thinks about it. Rothbury knows he must marry and Cassey will suit his needs perfectly but how will he be able to convince her that love is work the risks?

Will fear hold Cassy back from embracing a life full of love? Will Rothbury overcome his fear of rejection and be able to open his heart once more. Both will have to decide if they are willing to overcome their biggest fears for a chance at love.

Fans of Jane Austen prepare to be delighted! The Earl’s Lady Geologist lightheartedly shares some of Austen’s greatest quotes throughout the novel. I thoroughly enjoyed the witty banter between Cassy and Rothbury. It is very Elizabeth Bennet and Mr. Darcy-esque.

The story highlights many concerns of women during the Regency era that are still very relatable today. These challenges help the reader connect to Cassy on a deeper level. I would have liked to have had the villainous attempt at triumph played out a little more, but all in all, it did not lessen my enjoyment of the plot.

Alissa Baxter shows that she has researched her book’s subject matter well and aims to give her readers as much historically correct detail as she possibly can, while still creating a love story that is relatable to a modern audience. I highly recommend this book to those who enjoy reading Jane Austen and a compelling love story.

We received a review copy of the book from the publisher in exchange for an honest review. Austenprose is an Amazon affiliate. Cover image courtesy of Vinspire Publishing © 2021; text Melissa Makarewicz © 2021, austenprose.com.

5 thoughts on “The Earl’s Lady Geologist: The Linfield Ladies Series (Book 1), by Alissa Baxter — A Review”