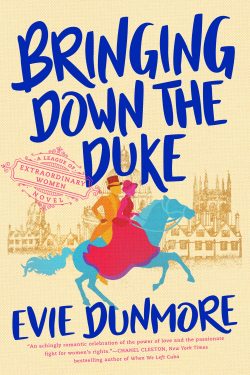 An estate with rolling green hills, fountains, and flower gardens… a dashing duke rides up to sweep me off my feet onto his horse as we ride off into the sunset…and, or at this point, of what feels like day 5,879 of stay at home, I would settle for a trip to the bookstore. Happily, I didn’t need to make a trip out because I had Evie Dunmore’s debut novel, Bringing Down the Duke, on my shelf waiting for me to give it a reread.

When I saw this historical romance novel popping up everywhere on social media last year, I knew it was a book I had to read. I mean, who doesn’t love to daydream about a handsome duke with a swoon-worthy British accent. When I saw it was a story about a young woman attending Oxford in 1879, I could not hit the one-click purchase button fast enough.

Annabelle Archer is a bluestocking through and through. She knows too many languages and is too opinionated to be considered a marriageable young lady. Plus, at her age, she is all but put on the shelf and considered a spinster. She has resigned herself to a life of caring for her extended family and dedicating herself to her studies. When she learns that there is a possibility to attend school, she yearns to have an independent life away from her demanding relatives who have taken her in and put her to work as a free nanny to their children.

Sebastian has been steady his whole adult life. After being thrust into the role of Duke at the young age of nineteen, he has worked tirelessly to restore the family name and fortune. Queen Victoria views him as one of her most trusted inner circle and with good reason. Running the multiple estates that he inherited as the first son and restoring their profitability would break a lesser man. But not Sebastian Devereux, nineteenth Duke of Montgomery. He always accomplished what he sets his mind to, no matter the cost. Nothing will stop him from restoring Montgomery Castle, an estate that his father lost in a bet.

The story picks up when Annabelle joins the suffragette’s working on gaining women the right to vote. Across the plaza, she sees a man that meets all the requirements for men they are supposed to approach to help win over. “Amend the Married Women’s Property Act, sir?” His eyes were, impossibly, icier than before. “You play a risky game, miss.” Little does she realize that the man she approaches is on his way to meet the queen and will be commissioned to help stamp out the very cause is so very passionately fighting for.

With overtures of Jane Bennet’s illness-induced stay at Netherfield Park, Annabelle, who was sent on a mission with her friends to invade the duke’s home in order to catch his ear about their cause, finds herself ill after storming out in the snow after an argument with none of than the duke himself. While staying at Sebastian’s home as Annabelle recovers from a fever, the two begin to realize that while they are on opposite sides of the political issue, they appreciate each other’s strength of character.

What follows in the subsequent chapters, is a brilliant back and forth of soul searching by the couple. Sebastian has been so driven to his goals to restore the dukedom that he has closed himself all from all emotional attachments. “Something tore inside his chest, something vital, and briefly, he wondered if a man could die from it.” Annabelle has had her sights set one living an independent life so fervently that she doesn’t trust that a man can mutually be her husband and allow her the freedom to be herself. “She pressed her palms to her face, “I’m a soldier at heart,” she whispered. “I can do this…”

Woven throughout Sebastian and Annabelle’s story is the struggle to pass an amendment to the Married Women’s Property Act in 1882. The fight for women to be able to retain some money and property under their own name is a very prevalent subplot throughout the book. As a history lover, I enjoyed learning more about this aspect of British women’s history.

Ms. Dunmore brilliantly allows you to get to know the emotional complexities of the main characters independent of each other. The reader can clearly see the “why” behind their choices made. This allows you to truly submerse yourself in the emotional pull they are feeling. As they struggle to find love, it is easy to sympathize with the struggle on both sides.

Even though the story is about two people from different stations in life, it holds a message for couples today. Will you let your differences tear you apart? Or will you merge your lives together as one? I don’t think there is anything more beautiful than seeing two people grow into their true selves as they fall in love.

Bring Down the Duke is a story of love, independence, and soul mates. It’s one of those romances that makes your heartache as you follow along holding your breath hoping the characters get their happy ending. Evie Dunmore’s debut novel is nothing short of a perfect love story.

My happy place right now has been reading a steady stream of happily ever afters. Bringing Down the Duke does not disappoint! I have now read it twice and it has left me with a contented sigh each time I read the last page. It is a slow burn story that accelerates into a fiery romance. I have no doubt that I will be reading this book over and over for years to come.

I have been in love with books since I was a child. As a young girl, in my Holly Hobby decorated room, I would sit and tape scraps of paper to my books so that I could organize them according to the Dewey Decimal System. I am a huge advocate for helping children learn to love reading. Along with hosting an online Regency-era based book club and a book club in my home, I started a book club at my son’s school for his class. Most days, I can be found at the library writing a book review or tucked in some quiet corner having a love affair with a newly discovered romance novel. View all posts by Melissa Makarewicz

2 thoughts on “Bringing Down the Duke (A League of Extraordinary Women, Book 1), by Evie Dunmore—A Review”