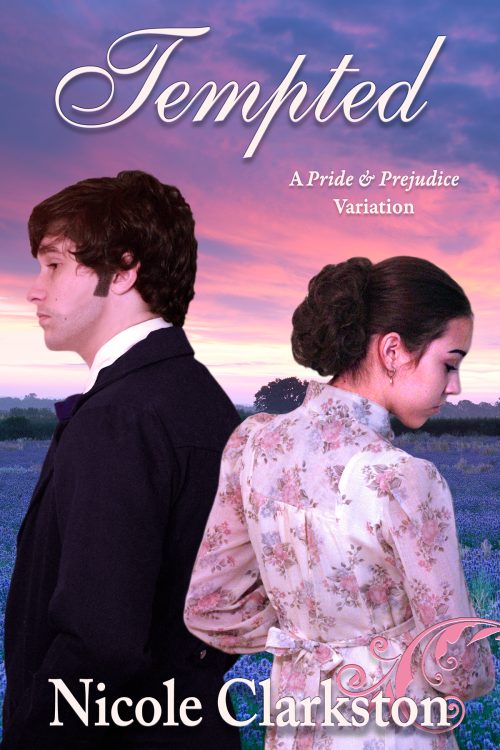 I hope everyone had a wonderful holiday weekend. I am happy to report that I am making progress in the Weed War in my garden now that the weather is cooperating.

Today I am thrilled to welcome a popular Jane Austen and Elizabeth Gaskell variations author to Austenprose. Nicole Clarkston has published sixteen novels and short fiction stories in the last five years. That is a phenomenal number. She certainly knows how to keep her many fans happy.

I have read several of Nicole’s books and listened to many of them on audiobook, my preferred way to experience a story. My favorites of her many offerings are the prequel, The Courtship of Edward Gardiner, inspired by a minor character in Pride and Prejudice, and her short story, “Mischances,” in the Falling for Thornton anthology. Clarkston is a superb historical romance author with a real talent for creating surprising plots, and tension-filled romance.

Nicole’s latest novel Tempted, a Pride and Prejudice variation, just released last week. Here is a book description and an interview with the author.

Running from her past, stumbling into the unknown, and drawn to a future she cannot have.

Elizabeth Bennet left all she loved behind when she accepted Colonel Fitzwilliam’s hand. Dragging her sister Jane, her cousin Billy Collins, and a horrible secret along with her, she leaves her home and family in the United States and sets sail for England… and safety. Expecting to meet her new husband when he returns from the Boer front, she is shocked to learn that not only does his family not believe her, but Richard has gone missing.

Fitzwilliam Darcy is only doing his duty. Trying to learn the truth of what happened to his cousin, while sheltering the woman who claims to be Richard Fitzwilliam’s wife, he encounters more than he bargained for. She is ill-prepared for life in his world, and her independent ways threaten to defeat her before she has even begun. Unfortunately, she is close to defeating him, as well. Pledged to marry another, but honor-bound to do all he can for Fitzwilliam’s wife, his equanimity and fortitude are tested whenever she is near.

When news of Fitzwilliam finally comes, it brings both grief and complications. Surprises, possibilities, and agonizing choices… Will Darcy and Elizabeth find a path to love? Or will new revelations and the shadows of the past tear them apart before they are even together?

From the author of These Dreams and Nefarious, Tempted is a deliciously nuanced tale of longing and trust. With good people in impossible places, close-knit families, and secrets working in the dark, Darcy and Elizabeth have to fight every step for their future.

You have written several novels and shorter works inspired by Jane Austen and Elizabeth Gaskell. What intrigued you about their writing, characters, or plot to prompt you to write in these sub-genres?

My very first book was actually an Elizabeth Gaskell spin-off, No Such Thing as Luck. I followed it three months later with Rumours and Recklessness, which is the one everyone thinks of as my first. I couldn’t sleep until I started getting these men down on paper, and I blame both John Thornton and Darcy for my sufferings.

You just released a new Pride and Prejudice variation entitled, Tempted. Can you tell us about your inspiration and the writing process for it?

I started this book back in April of 2018, and I think the idea was lurking in the cobwebs for some while before that. Since it has been a while, I honestly can’t remember what started it, other than the idea of writing an American Elizabeth and writing a love triangle.

I knew about how the British cavalry used to buy American horses, and that was a natural reason to bring Fitzwilliam to America to meet our girl. Getting her to England was a bit of a fraught journey because a girl such as her… well, not only is she unlikely to leave everything she loves on a whim, but she’s also prone to biting off more than she can chew. Things got ugly for our girl, but she survived, and she went on to steal the heart of Derbyshire’s Most Eligible Bachelor.

Can you share with us something about the story that is not in the book description that might surprise us?

There is no Lady Catherine, but her daughter Anne fills her shoes in the strong-willed department. Anne is not a sickly, retiring woman in Tempted, but an independent creature who knows her own mind and is a little set in her ways. I imagined her as a woman of means, of a mature (but still marriageable) age, who really didn’t have much family of her own. She is not Darcy’s cousin in this book, because the sensibilities of the day might have been slightly more uncomfortable with cousin marriages, even in that level of society. She is, however, a close friend of the family, and Darcy actually enjoys her company. Sort of. Really, I had fun developing Anne’s character in this new age.

Choose your favorite character in Tempted and put us in their shoes. What are their greatest assets and weaknesses?

Well, that’s a tough one. My knee-jerk is Elizabeth, so I’ll go with her because I empathize the most with her personality. In this book, she is no English country girl, but very much a product of the American West. That doesn’t mean she’s a yokel—she’s well-read, intelligent, refined in character and morality, but she’s a firebrand who is determined to do as she believes is right, and (ahem) darn the consequences.

Darcy and Thornton are literary icons that you included in several of your variations. Do they share any similarities? Why do you think they continue to be so popular with readers?

Both were the older brother of an irresponsible younger sister, both were thrust into manhood and given charge of the family at tender ages, and both were soul-numbingly bored and lonely by the time their angels stumbled into their lives.

If I had to answer with which character, I admired the most—well, I hate to say this, but it would be Thornton. He overcame so much more than Darcy ever dreamed of. That is not to minimize in any way the sufferings and duties that Darcy has had to endure. Thornton had all those, and then some when his father’s suicide forced the family into destitution and shame.

Additionally, Elizabeth Bennet and Margaret Hale are both fascinating heroines in Pride and Prejudice and North and South. What is it about their personalities that inspired you to continue or vary their stories?

Their inner strength and intelligence is their common thread. They both have a strong sense of right and wrong that dictates their actions, and they’re both prone to snap judgments that they’re pretty confident in. That is where the surface similarities end.

Elizabeth is the girl we all want to be. Margaret is the girl that many of us actually are. Elizabeth is funny, always has the clever thing to say, seems to have boundless energy, and is (until Darcy messes with her head) perpetually a happy, sunny person. Margaret is a serious girl, quiet in public (although she draws notice because of her grace), and she suffers much grief and burdens that render her exhausted through much of the story.

As a writer of variations of classic stories, how do you feel about staying close to canon, or really mixing it up?

Well, obviously I “like” veering wildly off cannon for the circumstances, even though when I’m picking up a book to read, I tend to be a weenie who likes the safe and comfortable route.

Character, however, is something different. They should feel like Darcy and Elizabeth, or like John and Margaret. Their character should be the same and should act in ways consistent with who they are in response to the situation.

Recently you revealed that you have been writing under the pen name, Alix James. Why did you choose to use a nom de plume, and why reveal it to your readers now?

I chose to reveal the connection now because I had two stories ready to go at the same time, and I thought, “why not?” A few of my closest friends and readers did know the secret and they guarded it very well for me, but that sort of thing doesn’t stay secret forever. It was a good time.

What was your most recent favorable read? Why did you enjoy it?

I don’t read when I’m on a writing jag. I don’t want any chance of another story tangling with mine because it would be far too easy to accidentally infuse my story with someone else’s ideas, and that’s not fair to anyone.

Now that I have a little break, I’ll name  Matrimonial Advertisement by Mimi Matthews. I just finished it last night. I loved the mystery behind the characters, the instant chemistry, and the strong desire the hero had to protect the heroine. He reminded me of a Wentworth/Brandon/Thornton hybrid, with his deep sense of honor, the failures and regrets of his past, and his doubts about his worthiness of being loved. Just a beautiful story.

Can you share any news about your next book or short fiction that you are planning/writing?

I’m in the plotting phase of two stories. The next Alix James story will, naturally, be light-hearted, but more sentimental than humorous. The other project is more ambitious, and I’m keeping my lips sealed for a little while. I don’t expect to have much to say on that for a few months, except that I am stupidly excited about it.

Nicole Clarkston is a book lover and a happily married mom of three. Originally from Idaho, she now lives in Oregon with her own romantic hero, several horses, and one very fat dog. She has loved crafting alternate stories and sequels since she was a child watching Disney’s Robin Hood and is never found sitting quietly without a book of some sort.

Nicole discovered Jane Austen rather by guilt in her early thirties—how does any book worm really live that long without a little P&P? She has never looked back. A year or so later, during a major house renovation project (undertaken when her husband unsuspectingly left town for a few days) she discovered Elizabeth Gaskell and fell completely in love. Nicole’s books are her pitiful homage to two authors who have so deeply inspired her.