From the desk of Monica Perry:

In Jane Austen’s Pride and Prejudice, Anne de Bourgh is a character who seems not to have much to offer. She’s just sort of there at Rosings Park, quiet and sickly and under her mother’s thumb. Readers can only hope that she occasionally has an original thought of her own. In A Will of Iron, a Pride and Prejudice what-if, author Linda Beutler exposes the last year of Anne’s journal. With her isolated life at Rosings, and a mother like Lady Catherine, who wouldn’t be curious what Anne has to say? I know I was! I was hooked from the second paragraph, where she drops quite the bomb. For months, she’s been scheming to extricate herself from Lady Catherine forever, and finally succeeded in setting her plan in motion. Sadly, she dies before getting the satisfaction of revealing her news in person, and seeing her meticulously plotted future come to fruition. Anne’s companion Mrs. Jenkinson knows all and delivers the journals to Charlotte Collins at Hunsford parsonage for safekeeping. Lady Catherine is desperate to get her hands on them to keep the circumstances of Anne’s death hidden, and as Charlotte makes her way through the journals she begins to suspect how far Lady Catherine might go to get her way.

I really liked Anne; she’s astute and blunt and had things gone differently, she and Elizabeth Bennet could have been great friends. Her journals chronicle not only her dealings with her mother and a Mr. C., her mysterious beau, but also her relationships with her Darcy and Fitzwilliam cousins, from their childhood to their current romantic tangle with Elizabeth. She genuinely cares for them and wants them to be happy, and has some very decided opinions on how she will make that come about. Anne’s logic with regard to her plan is a bit skewed, but her desire to be free from her mother makes her desperate and bold. It’s no wonder, as this Lady Catherine is truly cold- blooded! I had previously seen this book referred to as a macabre comedy. I’d say that’s a fitting description because as unhinged as Lady Catherine is, she is so outrageous I couldn’t help shaking my head and laughing. She even gave Mr. Collins the heebie-jeebies. I thought her final justice was perfectly done, if a bit messy!

Austenesque readers must have romance with their mayhem, which brings us to Mr. Darcy and Elizabeth Bennet. She’s harshly rejected his marriage proposal but his letter has begun to alter her opinion of him for the better. One of my favorite moments in the book is when, amid the awkwardness of their first meeting again at Rosings, she breaks the ice and offers him a small but meaningful moment of conversation.  As she spends more time with him and gets to know more of him via Anne’s journal, she struggles with her guilt and regret over the relationship she could’ve had. I particularly enjoyed the author’s incorporating two crucial “Pemberley moments” at Rosings: her first glimpse of Darcy’s estate and his handsome smiling portrait. Darcy is resigned to the fact that Elizabeth will never have him, and assumes she would be happier with a more amiable man…say, one Colonel Fitzwilliam, who – thanks to Anne’s will – is now better able to support a wife. When Jane Bennet and Mr. Bingley also find themselves at Rosings, we have quite a lot of star-crossed romance. I was really amused at some of the interplay – Jane’s arrival seemed to bring out the Colonel’s inner Bingley, and Bingley’s presence brought out Jane’s inner Elizabeth. I was quite happy with the way the pairings worked out.

The only thing that left me feeling a bit flat in this macabre madcap is that Darcy seemed willing to give up Elizabeth a bit too easily. I believe it was meant to show his selflessness in wanting to see her happy even if it isn’t with him, but he just seemed to accept it a little too calmly. I was ready for something to light a bit of a fire in him and spur him on to winning her. Of course they do find their way, and after an adorable declaration from Elizabeth, the ensuing romance and wedding night scene is delightful.

This is the second published book I’ve read and enjoyed by this author and I look forward to whatever she writes next. A Will of Iron is shocking and a bit gruesome, with a delightfully over the top villainess and three happy endings. I’d recommend it to anyone who enjoys some dark humor and a bit of Shakespearean twist with their Jane Austen. 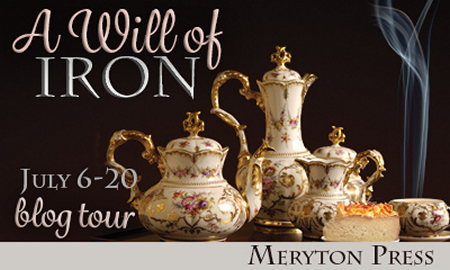 12 thoughts on “A Will of Iron, by Linda Beutler – A Review”