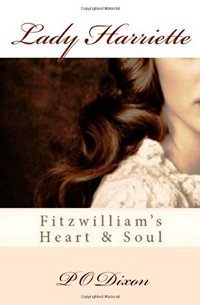 Starting with the third book in any series is certainly a challenge. One feels rather late to the party when one has missed out on major events and character development in two previous novels, so why would I attempt it? Add to the fact that they were Pride and Prejudice “what if” stories changing the plot of Jane Austen’s classic tale, and the problems intensify. What could possibly tempt me to move beyond my prejudices and give, Lady Harriette: Fitzwilliam’s Heart and Soul, a chance? The plot appeared to be focused on the married life of Colonel Fitzwilliam and his new bride Lady Harriet Middleton. His cousin Fitzwilliam Darcy is married to Elizabeth Bennet already too? What? No courtship? Where was this going? I was intrigued.

The book’s description and first few chapters truly piqued my curiosity. Lady Harriette was a beautiful young heiress twelve years younger than her husband, Colonel Richard Fitzwilliam, the second son of an earl with no fortune. How had he snagged HER, and what did the families think of this misalliance? We learn that he was a rake with a long-standing history of dalliance. I wondered if he had married for love or for money? The elephant in the room was how he will he ever keep his privileged and spoiled bride happy? Pressure mounts on Fitzwilliam after he discovers the ancestral property is near bankruptcy. Trying to keep this startling fact from his wife and family, while he and Darcy attempt to catch the thief, seemed wise, but later backfires. Even close friends Elizabeth and Fitzwilliam Darcy, whose happy life at Pemberley appeared untouchable, are faced with a ghost from the past when a young woman working as a housemaid at the Fitzwilliam estate has a painful connection to both Darcy and Fitzwilliam. Why is she there? Blackmail, or the evil workings of a disgruntled relative? The possibilities for conflict were mounting with every chapter.

Only a creative and skilled writer could truly pull all of these conflicts and challenges together. Author P. O. Dixon, known for her Pride and Prejudice variations, succeeded triumphantly. I was amazed at how she began the story after the marriage of the Fitzwilliam’s and then proceeded to fill in the backstory quite seamlessly. Having not read the first two novels in the series I did not know if she was back peddling or showing off her storytelling skills. It mattered not. Either way, it resulted in a page-turning plot. There were times when I found myself at a loss when characters like Jane Bennet, elder sister of Elizabeth, were not married to whom Austen paired them off with, or other sisters like Lydia had died. For the benefit of readers who are not familiar with the new twists taken from Austen’s plot that had transpired in previous novels, an author’s forward or a character list in the back would have answered those nagging questions that left me hanging. The character development of Col. Fitzwilliam and Lady Harriette was quite absorbing. I was skeptical that she would truly change, or that he really loved her. I knew that I would like the Col. from the start, and did, but Lady Harriette was another matter. She was a spoiled, rich girl who I could not connect with and wondered why the Colonel loved her beyond her youth, beauty, and money. You will have to read the novel to find out if they have their happy-ever-after.

I listened to an audio recording of Lady Harriette: Fitzwilliam’s Heart and Soul, read by Pearl Hewitt. The fast-paced story lent itself to a theatrical reading enhanced by Hewitt’s characterizations. This is truly a romance novel with some steamy love scenes, so please take heed. You are forewarned and forearmed for a great read. I highly recommend it.