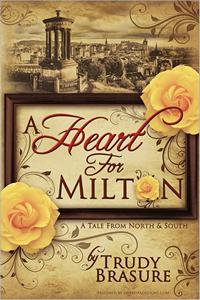 Based on the iconic work of Elizabeth Gaskell, North and South, Trudy Brasure’s A Heart For Milton picks up in the middle of the original work, with Margaret, a 19th century unmarried English woman, ready to leave her home soon after the death of her father.  She has finally realized her love for John Thornton, an industrialist and mill owner in their small town of Milton, but fears a relationship between the two will never happen due to her earlier dismissal of him.  In the original tale, they are kept apart, yet in this work, a brave move by Thornton ensures their immediate and happy marriage and settling in Milton.  Brasure then weaves a tale of challenges, twists, and romantic turns that face Margaret and John in their new life together.

When I read Gaskell’s North and South I continually commented to myself about how much I liked the way Gaskell presented both the thoughts of the north and the south of England on the Industrial Revolution and social issues of the time.  The romance took a backseat to the more prevalent storylines of striking mills and labor unions.  I was happy to see Brasure add these differing opinions into A Heart For Milton.  Including these discussions on social issues not only offers the reader insight into what living in 19th century England was like, but it also offers deeper insight into all of the characters in general once one begins to understand the social context of the time.

Brasure’s vision of Thornton was a truly spectacular one.  In the original North and South we know from his interactions with Mrs. Thornton that he is a caring, hardworking man.  From his interactions with Margaret we know him to be a stoic intellectual.  Brasure’s vision of him as a completely besotted husband was wonderful new layer.  This softer side of Thornton, falling in love with Margaret, as well as the beauty of southern England, made the story warming and romantic.  It was wonderful to see the side of him that is wholly mesmerized by his wife.  It was also wonderful to see Margaret not only as a doting wife, but a woman that still stuck to her principles.  Their developing relationship was a worthwhile journey to follow.

The only thing that became a bit repetitive was Thornton and Margaret’s ways of describing each other in their minds.  The adjectives became a bit overused by the end of the novel and I found myself getting agitated.  Other than this, however, I really enjoyed seeing the fleshed out roles of Mr. Bell and Mrs. Thornton.  I was always curious to how Mrs. Thornton would adjust to Margaret being in their lives, considering that she is such a formidable woman.  In all, Brasure’s work was a great fit with the original, dovetailing nicely and giving readers of North and South a great fairytale that they can enjoy for years to come.

14 thoughts on “A Heart for Milton: A Tale from North and South, by Trudy Brasure – A Review”