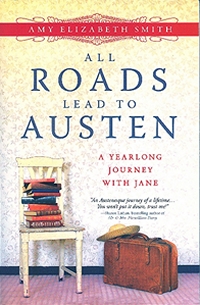 From the desk of Syrie James:

Amy Elizabeth Smith, an English professor at a private California university, uses her development leave to test a theory: how do Jane Austen’s novels resonate with readers in Latin America? Do people identify with her characters and storylines? In other words, does Austen translate across time, distance, and language? In All Roads Lead to Austen, Smith explores these questions and more in six different countries, conducting Jane Austen reading groups “on the road.” Along the way, she’s immersed in the local culture, history, and literature makes valuable friendships, and… meets and falls in love with the man she is going to marry.

Yes, you heard right! Smith hooks us Janeites right off the bat by revealing that her real-life adventure has a very Austen ending—and what could be better than that? She writes in a clear, personable style that is witty, intelligent, engrossing, and filled with interesting details.

Smith’s travels begin with a Spanish language immersion course in Guatemala, followed by a romantic stay in Mexico where, on the first day, she spends all her money on books instead of groceries. She (alarmingly) becomes seriously ill with a life-threatening tropical disease, thankfully recovers, feeds tame iguanas in Ecuador, flees the police in Chile, dines on delicious food in Paraguay, and encounters tango dancers on the street in Buenos Aires.

Amusingly (at least to this reader), it seems that everywhere she goes, Smith is hit upon by men looking for a hot date. She learns the hard way that her naturally friendly disposition is unintentionally giving the wrong signals. When she innocently accepts an invitation from a (married!) older man—the doorman of her apartment building—to “have coffee, just as friends,” to her shock and dismay, he grabs her and French kisses her. Later, one of Smith’s new female friends tells her:

“You’re pretty dumb for a smart woman… First of all, you can’t be friends with Chilean men. Period. Any Chilean man asking you anywhere, unless it’s strictly work related, is coming on to you… Second… university professors do not date doormen. I’m not saying this is right—I’m just telling you how it is. This Alberto knows that university professors don’t date doormen, so he naturally assumed that if you were willing to go out with him, it’s because you were looking for some fun. You know—something physical.”

All those reports about Latin lovers, it seems, are true! And as Smith points out:

Class is an issue in all of Austen’s novels… [along with] the precise ranking of who is above whom (and how far) and who can be matched with whom… Apparently, if I magically landed in Emma, my being a professor means that Robert Martin, the kind farmer who loved Emma’s protégé Harriet, would be off limits—except for a roll in the hay.

Smith spends her days reading the celebrated local authors, filling her suitcases to the bursting point with books, and sending home box loads more. Many of the cities she visits have areas with extensive book malls, bookstalls, and book shops that are, as she puts it, “used book heaven.” Smith writes:

This sort of book commerce has all but disappeared from the States, a fact that truly makes me sad. A person simply can’t earn a living in a major city with a bookstall of the size operated by many people in Santiago. Large chains and Internet businesses are efficient, but for real booklovers, there’s nothing to replace the pleasure of browsing used bookshelves and visiting with people who know every title they have for sale.

My favorite parts of the story were the small book group sessions, where Smith discusses Pride and Prejudice, Sense and Sensibility, and Emma with animated, interesting people, and we learn what her Latin American readers think of Austen. Overwhelmingly, they agree that people today can identify with the people, situations, and human emotions in Austen’s novels, which reflect aspects of their own lives.

I give Smith props for her fearlessly honest and often moving portrayals of the people in this book, especially considering that many are identified by their real names. My only mild disappointment was that she didn’t devote more time to the romance. I would have liked more emotions, more intimate details—more love story. But I can totally understand why, since this is a true story, the author might have been reluctant to reveal too many personal details on that score.

I picked up All Roads Lead to Austen thinking it was going to be an Austenesque novel, and when I discovered that it was a non-fiction travel memoir, I wasn’t sure it would be my cup of tea… but I absolutely loved it, and couldn’t put it down! It’s Eat, Pray, Love meets The Jane Austen Book Club—an unforgettable journey of the mind and heart.

Who does Smith end up marrying? I’ll never tell! But I will say this: when it comes down to making her decision, she does what any good Janeite would do: she relies on Austen as a guide to help her recognize her own Señor Darcy. Amy Elizabeth Smith’s memoir proves that we all have something to learn from Jane Austen if we will only listen. Her tale is so fascinating, thought-provoking, and real, I felt as if I were there with her, every step of the way. I cheered at the ending, and so will you.

Syrie James, hailed by Los Angeles Magazine as “the queen of nineteenth-century re-imaginings,” is an admitted Anglophile who loves All Things Austen. She is the bestselling author of five critically acclaimed novels: The Lost Memoirs of Jane Austen (Best First Novel, Library Journal); The Secret Diaries of Charlotte Brontë (2011 Audie Romance Award; Great Group Read, Women’s National Book Association); Nocturne (Best Book of 2011, The Romance Reviews, Suspense Magazine, and Austenesque Reviews); Dracula, My Love; and Forbidden, a YA paranormal romance that she co-wrote with her son, Ryan M. James. Syrie’s books have been translated into 16 foreign languages. Her short story leads the anthology Jane Austen Made Me Do It. A lifetime member of JASNA, RWA, and WGA, Syrie’s next novel, The Missing Manuscript of Jane Austen—the romantic story of a woman who discovers a previously unknown Austen novel—will be published by Berkley/Penguin Books in January 2013. Visit Syrie on Facebook, Twitter, and at syriejames.com.

8 thoughts on “All Roads Lead to Austen: A Yearlong Journey with Jane, by Amy Elizabeth Smith – A Review”