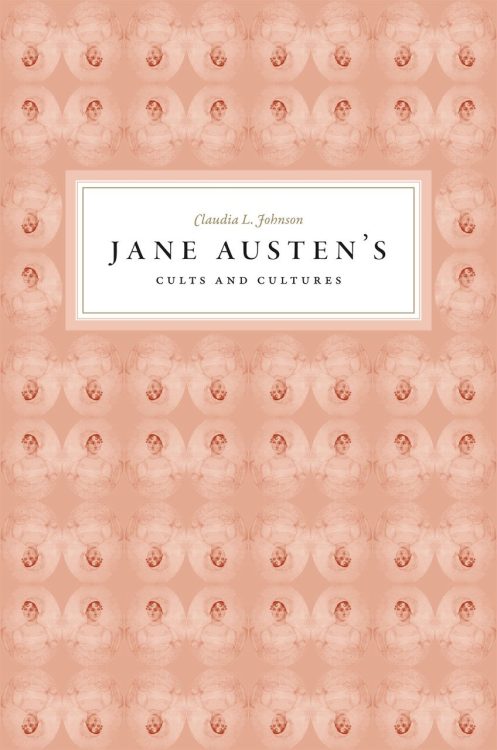 On May 18th the highly anticipated new book, Jane Austen’s Cults and Cultures, by the eminent Jane Austen scholar, Dr. Claudia Johnson, releases from The University of Chicago Press. Described as an “insightful look at how and why readers have cherished one of our most beloved authors” Johnson delves into the history of Austen’s enthusiasts through the centuries.

We have been very fortunate to be given a sneak peek of the book before publication by the author. Here is a book description, Dr. Johnson’s brief introduction, and the excerpt she selected for us:

Jane Austen completed only six novels, but enduring passion for the author and her works has driven fans to read these books repeatedly, in book clubs or solo, while also inspiring countless film adaptations, sequels, and even spoofs involving zombies and sea monsters. Austen’s lasting appeal to both popular and elite audiences has lifted her to legendary status. In Jane Austen’s Cults and Cultures, Claudia L. Johnson shows how Jane Austen became “Jane Austen,” a figure intensely—sometimes even wildly—venerated, and often for markedly different reasons.

Johnson begins by exploring the most important monuments and portraits of Austen, considering how these artifacts point to an author who is invisible and yet whose image is inseparable from the characters and fictional worlds she created. She then passes through the four critical phases of Austen’s reception—the Victorian era, the First and Second World Wars, and the establishment of the Austen House and Museum in 1949—and ponders what the adoration of Austen has meant to readers over the past two centuries. For her fans, the very concept of “Jane Austen” encapsulates powerful ideas and feelings about history, class, manners, intimacy, language, and the everyday. By respecting the intelligence of past commentary about Austen, Johnson shows, we are able to revisit her work and unearth fresh insights and new critical possibilities.

The following excerpt is from Chapter 2, “Jane Austen’s Magic,” which discusses versions of Victorian Janeism that link Austen with enchantment, indeed even with the fairy world that is full of magic despite its apparently humdrum appearance.

Foremost among the “pretty” volumes [Henry] James probably had in mind when he acidly described them as “what is called tasteful” is Constance Hill’s 1902 Jane Austen: Her Homes and Her Friends. This volume is by no means the first published effort to recover Jane Austen by visiting the places and recollecting the people associated with her; but it is the most sustained (the book is 268 pages long), and the most elaborate (Hill and her sister undertake their journeys with well-thumbed copies of Austen’s novels, Brabourne’s edition of the Letters and J.E. Austen-Leigh’s Memoir in hand).  It was also the most influential.  In his “authoritative” editions of Austen’s novels, R.W. Chapman cribs this book when footnoting the actual places visited by Austen’s characters.   Hill’s Preface begins by citing the altogether banal observation that “works of genius” are marked by “something intangible” that is “felt” but that eludes words:  “This ‘intangible something’ —  this undefinable charm – is felt,” she writes, “by all Jane Austen’s admirers.”  Generally we encounter such platitudes about Austen’s genius – which make up a large part of Victorian commentary on Austen – without attending closely.  If we listen carefully, however, something remarkable emerges.  Austen’s “undefinable charm,” she continues, has exercised a sway of ever-increasing power over the writer and illustrator of these pages; constraining them to follow the author to all the places where she dwelt  and inspiring them with a determination to find out all that could be known of her life and its surroundings. (v)

In Hill’s hands the word genius starts to dance across semantic boundaries, sometimes denoting the modern sense of talent or intellectual endowment, and other times reverting to the earlier sense of a tutelary spirit attached to a place; and the word charm is similarly charged, surpassing its bland sense as attraction, and moving towards something stronger, like spell.  Only this could account for the delightful but nevertheless palpable sense of supra-voluntary compulsion: under the “increasing power” of Austen’s “charm” the writer is “constrained” to follow Austen’s footsteps.  Veering momentarily into the language of Christianity borrowed by literary tourism throughout the nineteenth century (one recollects the prominent example of Byron), Hill  tells us that her book will take us on a “pilgrimage,” but only, as it turns out, to observe a crucial difference from other literary tourists.  Following “in the footprints of a favourite writer would, alas! in many cases lead to a sad disenchantment”(v).  Hill’s book promises, by contrast, an enchantment that will never disappoint or diminish: “We would now request our readers,” she writes, in “imagination, to put back the finger of Time for more than a hundred years and to step with us into Miss Austen’s presence,” a presence which is special.  Our journey is, to be sure, an act of friendship, for to know Jane Austen, as we have seen, is to desire to be her friend.  As it is so often the case throughout this little volume, we also cross boundaries into the noumenal: Jane Austen is no ordinary friend, and the purpose is not simply to get to become acquainted with her in any ordinary sense, rather it is to “‘hold communion sweet’” with her “mind and heart” (viii).  What is this enchanted place located at the intersection of space and time, a place from a bygone era, yet accessible today and still somehow permeated by the traces of Austen’s presence?   The title of the first chapter provides the answer: “An Arrival in Austen-land.” 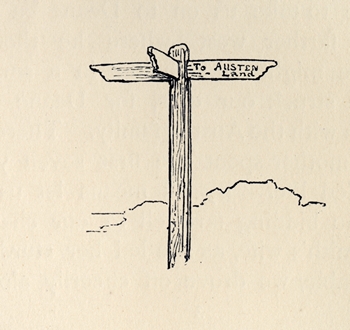 In an 1885 review of Brabourne’s edition of Austen’s Letters Thomas Kebbel describes his own pilgrimage to Austenian sites in Hampshire, and he laments that “Miss Austen’s country” is so little known.[i]  “Miss Austen’s country” has a different valence from “Austen-land.”  I take Hill’s unblushingly fanciful chapter title – and its accompanying illustration (FIG 002.001), guiding us towards a magical place – as an allusion to Alice’s Adventures in Wonderland.  The wonders Hill’s volume goes on to narrate are – like everything about Austen – infinitely less egregious than Charles Dodgson’s to be sure, but paradoxically they may also be more powerful for being so because, however palpable, most of the important ones aren’t, strictly speaking, visibly there at all, and this invisibility is in marked contrast to so many author-pilgrimages of the earlier nineteenth century.[ii]  Unlike heritage-constructing books of roughly the same period, such as W. Jerome Harrison’s Shakespeare-Land (1907) and Ward and Ward’s Shakespeare’s Town and Times (1896) or James Leon Williams’s The Homes and Haunts of Shakespeare (1892), which, as John Taylor has shown, use photographs both to show literary tourists what traces to look for and just as importantly to testify to the reality/authenticity of those sites, Hill’s volume relies mostly on drawings of Austenian places executed by Hill’s sister, even though photography was available.[iii] 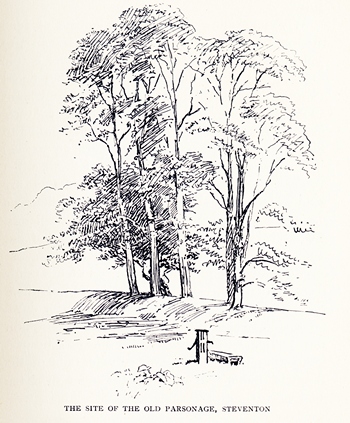 When Hill and her sister arrive at the village of Steventon, they cannot find the rectory where Austen was born (it had been torn down in the 1820s by Austen’s brother Edward who, oblivious of its hallowed status as Austen’s birthplace, built a better house there for his son’s use).  With the marvelous appearance of an aged informant related to servants in the Austen household, they locate “a pump in the middle o’ the field” which “stood i’ the washhouse at the back o’ the parsonage” (Hill, 8).  Though “barely noticed before,” the pump [see FIG 002.002] “become[s] interesting now as the only visible relic of the Austen’s home” (Hill, 10).  As the sketch indicates, the view of the pump clearly lacks the patent if somewhat shabby materiality that countless photographs imparted to, say, Ann Hathaway’s cottage, and the site and sight of the pump would look even more absurd as a photograph.  Its primary purpose, after all, is to represent the absence of the Steventon rectory.  As a result, the burden of wondrous vision is placed on the visitant – as when Ellen Hill is drawing the pump, and Constance, gazing upon the blank space,  muses “I can now picture to myself the exact spot where the parsonage stood, and can fancy the carriage drive approaching it . . .  I can even fancy the house itself…” (Hill, 10-11). In cases where Austenian remnants are actually extant, they are not always bewitching and, in the nineteenth century, made no part of the pilgrimage.  Chawton Cottage, to take the most conspicuous example, is an authentic and extant Austenian home, but it was so far from charming that J.E. Austen-Leigh not only declines to represent it in his Memoir, but he also actively discourages “any admirer of Jane Austen to undertake a pilgrimage to the spot,” because it has now been “divided into tenements for labourers” and “reverted to ordinary uses.” (Memoir, 69).  A comparison between Ellen Hill’s partial, highly idealized sketch and a contemporary 1910 photograph of Chawton Cottage demonstrates just how much imaginative work is required from the visitor bent on Austenian enchantment when confronted with such refractorily unlovely but actual material.

Claudia L. Johnson is the Murray Professor of English Literature and Chair of the English Department at Princeton University. She specializes in eighteenth- and early nineteenth-century literature, with a particular emphasis on the novel. In addition to eighteenth-century survey courses, she teaches courses about prose style,  gothic fiction, sentimentalism, the emergence of nationalism, film adaptations of fiction, Samuel Johnson, and, of course, Jane Austen. Her books include Jane Austen: Women, Politics, and the Novel (Chicago, 1988), Equivocal Beings: Politics, Gender and Sentimentality in the 1790s (Chicago, 1995), and The Cambridge Companion to Mary Wollstonecraft (Cambridge, 2002), with Clara Tuite The Blackwell Companion to Jane Austen (2005).  She has also prepared with editions of Jane Austen’s Mansfield Park (Norton, 1998), Sense and Sensibility (Norton, 2002), and Northanger Abbey (Oxford, 2003).  At present she is writing a book on novel studies tentatively entitled, Raising the Novel. She enjoys singing and gazing out the window, though not necessarily at the same time.

We received a review copy of the book from the publisher in exchange for an honest review. Austenprose is an Amazon affiliate. Cover image, book description, excerpt, and author bio courtesy of The University of Chicago Press © 2012; text Laurel Ann Nattress © 2012, austenprose.com.

42 thoughts on “A Preview & Exclusive Excerpt of Jane Austen’s Cults and Cultures, by Claudia L. Johnson”