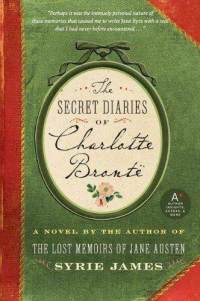 “…She ruffles her readers by nothing vehement, disturbs him by nothing profound: the Passions are perfectly unknown to her… what throbs fast and full, though hidden, what the blood rushes through… this Miss Austen ignores… if this is heresy – I cannot help it.” Charlotte Bronte in a letter dated 12 April 1850 to William S. Williams on reading Jane Austen’s Emma.

As a staunch fan and defender of anything Jane Austen, this bit of dissidence from one of Charlotte Bronte’s letters left me most peevish and not at all curious to know anything more about said author. And, although I enjoyed Miss Bronte’s novel Jane Eyre, very much in fact, I have always found myself a bit prejudiced against Miss Bronte for her slight committed against my dear Jane. In fact, when I met author Syrie James at the Jane Austen Society of America’s Annual General Meeting (JASNA-AGM: code for national Janeite convention) in October 2010 with a stack of her books for her to autograph, she observed that her book, The Secret Diaries of Charlotte Bronte was absent. My bibliophile Pride prohibited me from explaining why I could not possibly be interested in reading anything about Miss Bronte, and probably mumbled something incoherent. Nevertheless, recently I was offered a copy The Secret Diaries of Charlotte Bronte, and after reminding myself of how I had shamelessly fallen in love with every other work by Syrie James (The Lost Memoirs of Jane Austen, Dracula, My Love and Nocturne,), I convinced myself to get over this unforgiving, taciturn disposition and just read it!

This supposed lost diary opens shortly after Charlotte Bronte receives an unexpected proposal of marriage from her father’s curate, Arthur Bell Nicholls. As a maiden spinster and an already accomplished authoress, albeit concealed by the nom de plume Currer Bell, she is conflicted in her answer. Through these memoir pages, Bronte ruminates on her budding friendship with Nicholls, her obsession with her married educator in Brussels, her writing, and her beloved relationships with her now deceased siblings.

Unlike Austen, where fans and historians alike must conjecture about Jane Austen’s life and loves by piecing together what few letters were preserved, there is a wealth of meticulous correspondence and writings accessible for research. James herself admits that this novel is based almost entirely on fact. Charlotte Bronte’s life reads like a novel… from the sickness and deaths of her older sisters while they were away at the depressing Clergy Daughter’s School to her romantic attraction to her un-handsome superior in Brussels, (“it fills me with sadness to contemplate that one day I must leave you” p.204), which surely she drew from and dramatized accounts while writing Jane Eyre. I was charmed by her relationship with the Reverend Arthur Bell Nicholls, who apparently unbeknownst to Bronte, had been in-love with her for over seven years. Almost from the first moments of meeting this seemingly disdainful, dogmatic, stoic yet handsome curate, she disliked him – because, interestingly enough, she overheard, or rather misheard a comment he had made – granted at her expense – and for years her wounded pride festered, tainting all her opinions of him. (Shades of Jane Austen’s Pride & Prejudice seem to color Charlotte Bronte’s real life indeed!)

Like Charlotte Bronte’s work, this memoir is a melding of both tragedy and joy. Blurred lines between fact & fiction are so masterfully written I had to remind myself that The Secret Diaries of Charlotte Bronte is just the fruit of Syrie James’ genius. James not only made me sigh in all the right places, and weep at the tragic losses – James taught me, like Elizabeth Bennet in Pride & Prejudice, to gradually allow my former prejudices to be removed. If you haven’t read this book, originally published in 2009, you need to add it to the top of your list!

Added bonus are the helpful Author Insights at the back of the book which include a succinct Q & A, Excerpts from Selected Correspondence of Charlotte Bronte, Selected Poetry by the Bronte sisters, a listing of their Works, and Discussion Points for reading groups.

19 thoughts on “The Secret Diaries of Charlotte Bronte, by Syrie James – A Review”

Since 2007, Austenprose has championed Jane Austen and her legacy by featuring information about her work, life, and times. Her enduring appeal and widespread influence are showcased here with reviews of the best historical novels, nonfiction books, British period dramas, and curated recommendation lists.