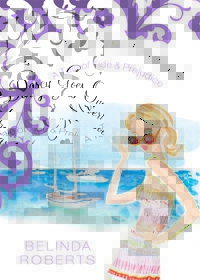 Please join us today in welcoming Austenesque author Belinda Roberts for the official launch of her book blog tour of Mr. Darcy Goes Overboard: A Tale of Tide & Prejudice, a new Pride and Prejudice contemporary retelling that was released on June 1, 2011 by Sourcebooks.

Salcombe is a lively, fashionable seaside town on the south west coast of England – the sort of busy place where you turn a corner and whoops!  Excuse me!  Sorry!  After you!  You have had an encounter with a young Mr. Darcy.  They are everywhere, mixed in with young Mr. Bingleys, anxious Mrs. Bennets and shrieking Kittys and Lydias making themselves heard from one end of Fore Street to the other.  So, having spent many happy family holidays ourselves in Salcombe, I suppose it wasn’t so much an inspiration rather, as Mr. Gradgrind in Hard Times would say ‘FACT’ that drew me to write a modern day version of Pride and Prejudice.  Jane Austen’s characters are there, in Salcombe, alive and kicking – or splashing about at any rate!  In my mind the ball gowns of Pride and Prejudice started to be replaced by bikinis, ‘Pemberley’ became a magnificent sixty-two foot yacht, the militia took on the role of lifeguards – it was a book waiting to be written!

What is more, Salcombe has a wonderful Town Regatta each year – a week of events that bring the whole of Salcombe society together.  Assemblies, balls, dances are all there still – but in a slightly different guise.  The famous Netherfield Ball, for instance, could become the equally famous Salcombe Estuary Swim.  At both, society comes together: there is the chance to mingle, to avoid certain people and to search out others – Darcy and Elizabeth could hold their conversation whilst swimming the choppy waters.  The Greasy Pole and Sandcastle Competition, along with the beautiful cliff walks, golden beaches and plenty of opportunities for frolicking about in the sparkling seas offered further wonderful opportunities.  The links seemed perfect and I couldn’t wait to start.

My opportunity came when I went down to Salcombe to accompany my eldest daughter, Sophie, who needed some peace and quiet to write her dissertation on Debussy’s Pelléas et Mélisande.  This was a serious endeavour.  We both sat at the little kitchen table of our terraced house in Island Street Salcombe, set up our beloved MacBooks and started to write.  I was keen that my book should follow Jane Austen’s original chapter for chapter in plot and characterization as best I could.  The combination of reading Pride and Prejudice, translating it into a modern seaside setting and trying to keep quiet was too much and I kept bursting out laughing – which was not helpful to poor Sophie!  The hardest part was ‘modernizing’ Lydia’s disgraceful behavior, which of course, would hardly be noticed these days. I hope I came up with a suitably sensational solution!

Book done, we decided to make a film … you can see a trailer at www.beetleheart.co.uk. which hopefully will give you a taste of the delights of Salcombe and Mr. Darcy Goes Overboard!

Belinda Roberts has written twelve plays for children’s theatre which have been performed by groups throughout the world. Mr. Darcy Goes Overboard (previously self-published as Prawn & Prejudice) is her debut novel. She has also worked as a graphic designer and she lives in Cotswold’s in England.

Enter a chance to win one of three copies of Mr. Darcy Goes Overboard: A Tale of Tide & Prejudice by leaving a comment answering what intrigues you most about reading a Pride and Prejudice retelling, or which of Austen’s novels or characters you would like to see Belinda write about next, by midnight PT, Wednesday, June 15, 2011. Winners to be announced on Thursday, June 16, 2010. Shipment to US and Canadian addresses only. Good luck!