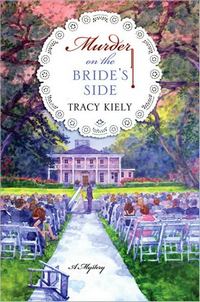 An old Richmond, Virginia plantation, a festive wedding, and family disputes set the stage for murder in Tracy Kiely’s novel Murder on the Bride’s Side, the second novel in the Elizabeth Parker mystery series inspired by Jane Austen’s classic novels. A year ago, Kiely wowed me with her debut novel Murder at Longbourn loosely based on characters from Austen’s Pride and Prejudice. This time we follow the further adventures of her endearingly flawed, angst-ridden sleuth Elizabeth Parker as she draws strength and great quotes from Sense and Sensibility.

The story picks up eight months after Elizabeth solved a double murder at her aunt Winnie’s B&B in Cape Cod. She and her boyfriend Peter McGowan (who she reconnected with in Murder at Longbourn) are still an item, but the challenge of a long-distance relationship niggles at her insecurities. He is joining Elizabeth in Richmond, Virginia while she fulfills her maid-of-honor duties for her best friend Bridget Matthews whose wedding is at the family estate Barton Landing, a former tobacco plantation fronting the James River. It would not be a proper old southern family without an elderly potentate to wield their cane and pelt crosswords at their children, so Kiely has supplied us with Elsie Matthews, a meddling grand dame who likes to match make and foretell the future. Upon Elizabeth’s arrival, her ominous prediction of “death is coming” ultimately comes to pass the day after the wedding when the body of her daughter-in-law Roni is found brutally murder with a large kitchen knife in her chest. This is a tragic event, so why is no one grieving?

Elizabeth soon discovers that almost everyone in the Matthews clan wanted Roni dead. She is what Barbara Bush quipped “a noun beginning with b and rhyming with witch.” She was the much younger second wife of Elsie’s eldest son Avery, the heir presumptive and president of a thriving landscaping company whose recent stroke has left him in a wheelchair. His scheming wife (with a man-made figure) was determined that he sell in order to slow down and enjoy life. This news sends the family into a tailspin of anger and fear, so much so that someone commits murder to stop her.

Among Elsie’s three children and their families, the chief suspect is Bridget’s cousin Harry Matthew’s, a Willoughby-like playboy who is often in his cups but not at all the killing kind. Because of Elizabeth’s success with sleuthing out the murderer at her aunt’s B&B last January, she is called upon by Bridget to find the proof of the real murderer and free Harry. Could it be Roni’s browbeaten teenage daughter Megan, Avery’s starchy infatuated nurse Millicent McDaniel, womanizer and family leech David Cook, Avery’s jilted girlfriend Julia Fitzpatrick, or Elizabeth herself, who is found in possession of the valuable diamond necklace missing from Roni’s body? Add to this drama the coincidence of Peter’s former flame, wedding coordinator Chloe Jenkins, is on the prowl again and Elizabeth will need to channel the Dashwood sisters: Elinor’s inner strength and Marianne’s passionate determination to solve the crime.

Written from her heroine’s perspective, it was a delight to return to Kiely’s breezy, familiar, blog-like writing style. It drew me into Elizabeth’s anxious world as a singleton and struggles with confidence in her own abilities, building upon my desire for her to succeed. Like Austen, Kiely excels at endearing characterization supplying an array of odd, interesting, unique but somehow familiar characters. I particularly appreciated her descriptive use of metaphor and subtle humor. This mystery enthusiasts paid close attention to clues, had my predictions, but was still surprised at the final reveal. My major quibble is that this novel has even fewer connections to Austen than her previous outing. If you are going to claim that it has been drawn from Sense and Sensibility, you better deliver. Elizabeth’s ongoing relationship with Peter had its ups and downs – but really – how could anyone not be besotted by a man who can quote lines from Cary Grant movies by heart? Kudos to St. Martin’s for the beautiful cover. BIG improvement. I am looking forward to Tracy’s next murder mystery in the series inspired by Austen’s Persuasion. Yay! Men in blue. Go Wentworth.

9 thoughts on “Murder on the Bride’s Side, by Tracy Kiely – A Review”