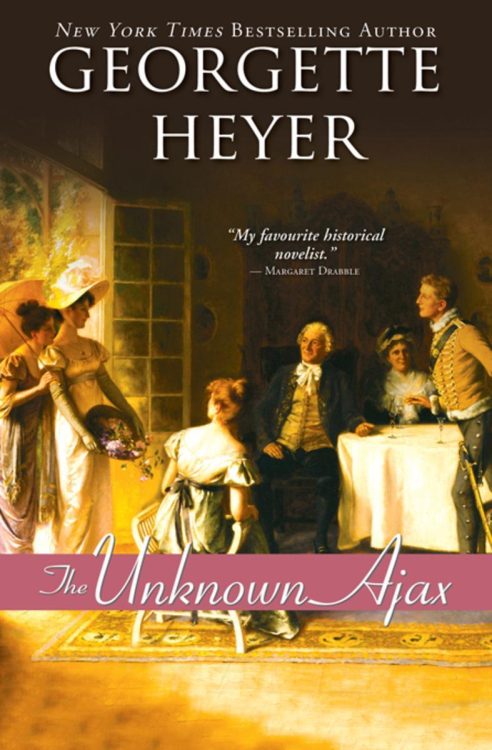 From the desk of Brooke:

The Unknown Ajax begins with Lord Darracott reaming out his daughter-in-law over dinner for her prattle.  Then the point of view switches briefly to the new servant Charles from whose perspective we learn that Lord Darracott is an extremely unpleasant man.  What makes him more unpleasant is that his oldest son Granville is dead.  Rather than his heir being Matthew Darracott, Lord Darracott must acknowledge Hugo who is Granville’s son with the daughter of a weaver.

Lord Darracott and the rest of the family expect Hugo to be a savage practically.  So Hugo decides to oblige the family.  The reader notices Hugo goes from speaking proper English to speaking some form of cockney.  As the story progresses we observe Hugo learning more and more about his new family.  Not all of it is pleasant.  Of course, there is the patriarch who is distinctly unpleasant.  Then there are Hugo’s cousins some of which are OK, others of which are ridiculous.  All of cousins have suffered from their grandfather’s treatment.  Then there is the house itself which has been allowed to fall apart around them.

This was the first Regency romance that I’ve ever read by Heyer.  I liked the last part of the book.  The first part of the book was a little bit slow.  The conversations were a little hard to follow because there were so many idioms used.  Certain of the cockney accents were impossible to understand.  I was only able to guess as what was being said based upon the reaction of Hugo.  I think if I heard someone speaking that way, I’d probably be able to understand it.

It was amazed by the snobbery the family exhibited.  Even during that day, it was known that some of the merchant class were just as wealthy if not more wealthy than those with land and titles.  Many of the merchant class were able to send their children to the high class schools.  There really was not any reason that they should have expected Hugo to be backwards, but that’s just me.

Anyway, this book was OK.  I would not mind trying another Heyer to see how the rest of them are.

We received a review copy of the book from the publisher in exchange for an honest review. Austenprose is an Amazon affiliate. Cover image courtesy of Sourcebooks Casablanca © 2011; text Brooke© 2010, austenprose.com. Updated 15 March 2022.

26 thoughts on “The Unknown Ajax, by Georgette Heyer – A Review”