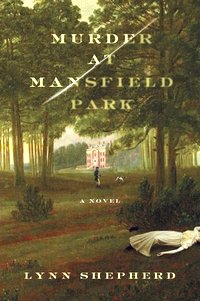 Mansfield Park is considered (by some) to be the dark horse of Jane Austen’s oeuvre and her heroine Fanny Price intolerable. Poor Fanny. She really gets the bum’s rush in Austenland. The patron saint of the weak, insipid and downtrodden, she is Jane Austen’s most misunderstood heroine. In fact, many dispute if she is the heroine of Mansfield Park at all, giving that honor to the evil antagonist Mary Crawford.

Much has been debated over why Austen’s dark and moralistic novel has not been embraced as warmly as its sparkling siblings. Personally, I delight in reading Mansfield Park and root for Fanny Price’s principles to prevail. So when I read a book announcement last July that Jane Austen’s classic would be re-imagined as a murder mystery “whereas Fanny is quite a pain in the arse in Austen’s version, Lynn’s [Shepherd] Fanny is an outrageous gold-digger”, my rankles were ired. First it was zombies in my Austen, then vampires and now my gentle Fanny was under attack. What next?

Reading Murder at Mansfield Park with a chip on my shoulder made for a difficult beginning. I was resistant and confused by all the character changes. Shepherd mixes up Austen’s classic story by switching the protagonist and antagonist, morphing other characters and plot points and spotlighting the murder instead of the moralistic undertones that Austen chose to soft shoe her narrative. This was Austen’s setting but in an alternate universe. Meek, poor and principled Fanny Price was egotistical, rich and underhanded. Selfish, coquettish and manipulative Mary Crawford was generous, demure and obliging. Edmund was no longer a Bertram but the son of Rev & Mrs. Norris, now rich gentry. Henry Crawford was no longer an estate owner but a renovator of estates. There were the familiar private theatricals, the gift necklace and ball, the excursion to view a picturesque estate, and the elopement, but all tweaked and scrambled. There are other changes, but you get my drift. If Mansfield Park nay sayers wanted a complete renovation, this was it. The only constant between both novels was the officious and abrasive Mrs. Norris. Obviously Shepherd knew a good/bad thing when she saw it, and let her be.

I was immediately charmed by Shepherd’s command of Regency-era language. Not since Diana Birchall’s Mrs. Darcy’s Dilemma have we been treated to such effusions of fanciful Austenesque styling. As the prose eloquently rolled through the first few chapters I set aside my resistance to change and began to appreciate the craft behind the concept of turning everything we knew about Austen’s characters and plot completely asunder. This was a pastiche written with great respect for the original by an author who understood the novel as it was evolving during the early nineteenth-century and had a superior command of the language.

When the insulting and underhanded Fanny Price is finally bumped off half way through the book, few will grieve and many will cheer. She had now become Shepherd’s Fanny and not Austen’s, so it is all forgivable. Enter thief-taker Charles Maddox hired by Tom Bertram to sleuth out the criminal and the novel becomes a murder mystery. Since I have a penchant for handsome and clever gumshoes who swoop in and put the world to right, it was an easy step to acquiescence. Shepherd had achieved the impossible by renovating Jane and totally charming me in the process. Her characterization of Henry Crawford proclaimed that it was his “role is to improve upon nature, to supply her deficiencies, and create the prefect prospect that should have been the imperfect one that is.” I will argue that Lynn Shepherd has accomplished just the same.

13 thoughts on “Murder at Mansfield Park, by Lynn Shepherd – A Review”