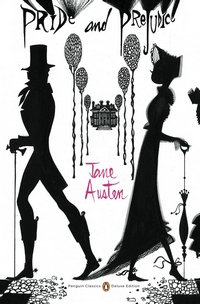 How Wickham and Lydia were to be supported in tolerable independence, she could not imagine. But how little of permanent happiness could belong to a couple who were only brought together because their passions were stronger than their virtue. The Narrator, Chapter 50

Mrs. Bennet is ecstatic over Lydia and Wickham’s marriage, but Mr. Bennet will not admit them to Longbourn until Elizabeth and Jane convince him otherwise. Lydia lets slip that Mr. Darcy was at her wedding. Elizabeth writes to Mrs. Gardiner who in turn reveals Mr. Darcy’s involvement in securing the wedding. She realizes that he is exactly the man to suit her. After silly theatrics, Lydia and Wickham depart for Newcastle. Bingley and Darcy return to Netherfield and call on the Bennet’s. Bingley proposes to Jane. Lady Catherine arrives at Longbourn determined to make Elizabeth promise not to marry Mr. Darcy. Are the shades of Pemberley to be thus polluted? Elizabeth will not oblige her wishes.

Lydia and Wickham are married, but what a “patched up business” it is. Mrs. Bennet is ecstatic, Mr. Bennet is peeved, Elizabeth and Jane embarrassed and all of Meryton think they are an unfortunate family. Lydia and Wickham are allowed to visit at Longbourn only after Elizabeth and Jane convince their angry father that more harm would be done socially if he refuses to admit them. This was a wise move by team Bennet. The couple arrive and amazingly act like nothing is amiss. They truly have no scruples. While Elizabeth watches her younger sister and new brother-in-law’s unprincipled behavior, she continues to reflect upon her experience at Pemberley and comes to an important conclusion.

She began now to comprehend that he was exactly the man who, in disposition and talents, would most suit her. His understanding and temper, though unlike her own, would have answered all her wishes. It was an union that must have been to the advantage of both; by her ease and liveliness, his mind might have been softened, his manners improved; and from his judgment, information, and knowledge of the world, she must have received benefit of greater importance. The Narrator, Chapter 50

She has come full circle from hate and prejudice to love and respect. Now that she realizes he is the exact man to suit her, he is beyond her reach. She surmises that he would never want to be connected to her family with Mr. Wickham as a brother-in-law and Lydia as a sister-in-law.

Elizabeth was disgusted, and even Miss Bennet was shocked. Lydia was Lydia still — untamed, unabashed, wild, noisy, and fearless. She turned from sister to sister, demanding their congratulations; and when at length they all sat down, looked eagerly round the room, took notice of some little alteration in it, and observed, with a laugh, that it was a great while since she had been there. The Narrator, Chapter 51

Careless Lydia let’s slip that Mr. Darcy was at her wedding and Elizabeth is stunned by the connection, writing to her aunt Gardiner for all the details. Her aunt complies with a detailed account of Mr. Darcy’s involvement to locate the couple and convince them to marry. She also learns that he has paid for everything but insisted that Mr. Gardiner be given the credit for it. Mrs. Gardiner is convinced that he did it for Elizabeth’s sake, even though Darcy claimed that it was his fault for not making Wickham’s bad reputation known. Honorable man either way.

Prospects for Jane and Elizabeth look grim. Their chances to attract a suitable marriage after thoughtless and wild Lydia’s elopement have ruined the family’s reputation. They have little money for a dowry and few connections outside of Hertfordshire. When news reaches them that Mr. Bingley has returned to Netherfield Jane tries to be unaffected and unmoved. When he calls and brings his friend, Elizabeth does not know what to think.

Her astonishment at his coming — at his coming to Netherfield, to Longbourn, and voluntarily seeking her again, was almost equal to what she had known on first witnessing his altered behaviour in Derbyshire. Chapter 53

And when he is there, neither of them say much to each other nor actively engage in conversation. Our Elizabeth reserved? It must be love.

She was in no humour for conversation with any one but himself; and to him she had hardly courage to speak. The Narrator, Chapter 53

Elizabeth tries to analyze his behavior. She is baffled that he would not seek her out and talk as openly as they had at Pemberley.

“If he fears me, why come hither? If he no longer cares for me, why silent? teasing, teasing, man! I will think no more about him.” Elizabeth Bennet, Chapter 54

She rationalizes, as only women can, that she is feeling something he is not. Why would he be interested in her again after she refused him so vehemently the first time? No man could be THAT forgiving and gracious.

“A man who has once been refused! How could I ever be foolish enough to expect a renewal of his love? Is there one among the sex who would not protest against such a weakness as a second proposal to the same woman? There is no indignity so abhorrent to their feelings!” Elizabeth Bennet. Chapter 54

And then he departs for London with no real re-connection between them. Bingley on the other hand remains, continues to court Jane and then proposes! This was a surprise. Jane had not thought he was partial again and she continued to act in her usual and unaffected manner, certainly not encouraging him as much as Charlotte Lucas would have approved of. Elizabeth is truly happy for her sister but of course finds the irony in it.

“And this,” said she, “is the end of all his friend’s anxious circumspection! of all his sister’s falsehood and contrivance! — the happiest, wisest, most reasonable end!” Elizabeth Bennet, Chapter 55

The family is even more ecstatic and in Mrs. Bennet’s eyes Jane and Bingley have superseded Lydia and Wickham as her favorite daughter and son-in-law.  Of course she thinks of the financial and social benefits. What carriages Jane will have. What pin money. Everything is appearances to Mrs. Bennet. She is off in a flash to tell her sister Mrs. Phillips the good news, who, then proceeds to pass it on to the Meryton grapevine.

The Bennets were speedily pronounced to be the luckiest family in the world, though only a few weeks before, when Lydia had first run away, they had been generally proved to be marked out for misfortune. The Narrator, Chapter 55

“A report of a most alarming nature reached me two days ago. I was told that not only your sister was on the point of being most advantageously married, but that you, that Miss Elizabeth Bennet, would in all likelihood be soon afterwards united to my nephew — my own nephew — Mr. Darcy.” Lady Catherine de Bourgh, Chapter 56

What transpires is one of the most brilliantly written “battle of wits” in literature. Lady Catherine with all of her arrogance and officious interference is determined to make Elizabeth agree not to enter into an engagement with her nephew. Elizabeth won’t even acknowledge her right to ask such questions.

“I do not pretend to possess equal frankness with your ladyship. You may ask questions which I shall not choose to answer.” Elizabeth Bennet, Chapter 56

So much dignified impertinence, but totally appropriate. We silently root for our heroine. When Lady Catherine sees that she will not comply to her wishes, she stoops to conquer by attacking Elizabeth’s family.

“Not so hasty, if you please. I have by no means done. To all the objections I have already urged, I have still another to add. I am no stranger to the particulars of your youngest sister’s infamous elopement. I know it all: that the young man’s marrying her was a patched-up business, at the expence of your father and uncle. And is such a girl to be my nephew’s sister? Is her husband, is the son of his late father’s steward, to be his brother? Heaven and earth — of what are you thinking? Are the shades of Pemberley to be thus polluted?” Lady Catherine de Bourgh, Chapter 56

The shades of Pemberley to be thus polluted! Ha! One of my favorite lines in the novel. If anyone does not understand the reference, shades are used in this instance in the ancient visage meaning ancestors. Lady Catherine is implying that by Elizabeth marrying her nephew their ancient family line would be tainted by Elizabeth’s bad blood. Snob.

Elizabeth does take the field and the war handling herself with more dignity and aplomb than an aristocrat three times her age and experience. Bravo. This amazing intercourse between them does however, give her renewed hope. A rumor of Mr. Darcy’s intended proposal is encouraging. He is not one to discuss this with anyone lightly, so it could be true. But who could have betrayed her to the great Lady?