Jennie at The Bennet Sisters blog has started a meme that I could not resist. She asks which are your top ten favorite Pride and Prejudice covers? Lord knows there are hundreds of them out there. A search on Google images, Advanced Book Exchange, Good Reads and Barnes & Noble produced a plethora of selections. It was tough to narrow it down to just ten. I could do a whole blog on the good, the bad, and the atrociously ugly covers that I ran across, but here are my “most accomplished” selections. (P.S. It’s ok to judge a book by its cover when that is the main objective.) 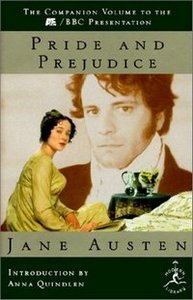 #10 (left) Modern Library 1995: Chosen purely because Colin Firth is on the cover. La. This was one of the many variations of covers that sprung up after the A&E/BBC 1995 miniseries Pride and Prejudice. Oh that Mr. Darcy just does it to us every time.

#9 (right) Marvel Comics 2009: Pride and Prejudice went all graphicy and such on us last year when Marvel Comics produced five editions of P&P in comic format. This is issue number four. It was my favorite of the five: Lizzy walking in the verdure of the English countryside. (she is a bit pear shaped in her straight Regency frock though) 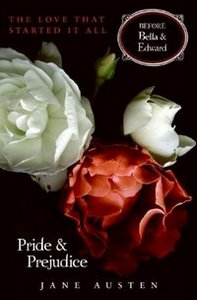 #8 (left) Heritage Classics 2009: I know! Doesn’t this look vintage 1950’s or what? It’s not. I believe it is a knock off of those dime paperbacks romance novels that your sister used to hide from the parental units. I do not like to think that is Darcy manhandling a blonde Lizzy, so I imagine it is Wickham and Georgiana and it works.

#7 (right) Harper Teen 2009: Cashing in on the Twilight craze, Harper Collins issued a whole series of classics with new covers of flowers on black backgrounds. It worked. Teens snapped them up at my store, but were a bit miffed when they got to chapter three and realize that there were no vampires or werewolves in it. ;-) The covers where quite beautiful though. 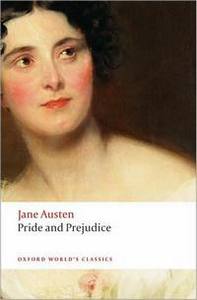 #6 (left) Oxford World Classic 2008: There have been many variants of Regency-era young ladies in white gracing covers of classic literature over the last ten years. I particularly like this one because of the lady’s expression and upward gaze. I imagine it is Elizabeth looking at Darcy after their reunion at Pemberley and she now knows how big his house is. (Just kidding – we all know it was really love that motivated her change of heart – right?)

#5 (right) Purnell Maidenhead 1976: This cover just makes me smile. It is vintage fare from the 1970’s and reminds me of the Georgette Heyer covers from the same era. The artist did actually capture the “one turned white and one turned red scene” when Elizabeth is introduced to Mr. Wickham in Meyerton and Darcy arrives on horseback. Lizzy does not quite have the correct expression she should at that moment though. Still fun. 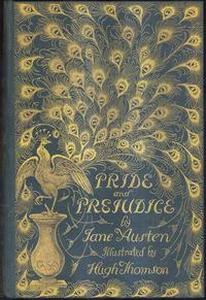 #4 (left) White’s Books 2009: This striking graphic image designed by Kazuko Nomoto of Regency-era dancing slippers, Hessian boots, frocks and breeches is elegant and stylish. The couples are facing each other and I assume dancing, but since we do not see above their waists, they could be kissing! Naaagh.

#3 (right) George Allen 1894: The classic peacock cover designed by illustrator Hugh Thomson still holds up as one of the most elegant and beautifully designed P&P covers of all time over a hundred years after it was first published. I just wish I could afford a copy for my own library. Since they are one of the most highly collectible of vintage Jane Austen editions (except first editions which are really, really to out of my league) they command close to a $1,000 from antiquarian book sellers. Cheers to anyone who bought their copy before 1995.

#2 (left) Pocket 1940: This vintage cover just has it all: splashy peacock in the foreground elegantly displaying his plumage and a scene of Pemberley perhaps with a couple in the background. I enjoy covers with symbolism, color and beautiful design. This one sings for me.

#1 (right) Macmillan and Co 1895: Another vintage treasure that I can not afford, but shall admire from afar is this regally elegant cover in red with gold embossing. The design really has nothing to do with P&P since it is more Renaissance than Regency, but it is opulent and accomplished and I think even Mr. Darcy would approve.

So gentle readers, which are your favorite Pride and Prejudice covers? Please leave a comments and I challenge all of you with blogs to post your list. Be sure to voice your opinion decidedly and vote which of my top ten you like the best.

28 thoughts on “My Top Ten Favorite Pride and Prejudice Covers Meme – Vote for Yours!”