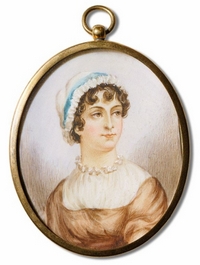 The wait is over for those lucky Janeites who live on the east coast or will be visiting New York City shortly. The new exhibit A Woman’s Wit: Jane Austen’s Life and Legacy opened today at the Morgan Library and should prove to be a once in a lifetime Austen extravaganza for enthusiasts and admirers of the English author whose novels are not only masterpieces of social observation and wit, but profoundly popular in world literature close to two hundred years after their publication. You can read a full description of the exhibition from my previous preview post. The treasures collected and support material should prove to be a proper celebration and tribute to Austen’s impact and legacy.

Check out the new online highlights of the exhibition at the Morgan Library website and experience a glimpse of the full feast of Austenalia offered including selected images of original letters written by Austen, original manuscripts of Lady Susan and The Watsons, images of portraits of the author, artwork from editions of her novels and from the Regency era, and a short documentary film The Devine Jane: Reflections on Austen especially commissioned for the exhibition featuring interviews of contemporary writers, scholars and actors such as Sandy Lerner from the Chawton House Library and Harriet Walter, acclaimed British actress who brilliantly portrayed Fanny Dashwood in the 1995 film adaptation Sense and Sensibility.

The Morgan Library has the largest collection of Jane Austen’s letters and manuscripts in the world. One of the most spectacular items in the collection is the manuscript of Jane Austen’s delightfully wicked novella Lady Susan, the only surviving complete manuscript of any of Austen’s novels. The online exhibit includes several images of the original manuscript written in Jane Austen’s hand and augmented by an audio reading of each page from the Naxos AudioBooks recording of Lady Susan read by actress Harriet Walter, who is also interviewed in the documentary film.

The exhibition runs November 6, 2009 through March 14, 2010. Unfortunately, this Janeite can not attend, but we are hoping for a report from one of our readers who has the pleasure of spending a day or two with Jane in New York City.

11 thoughts on “A Woman’s Wit: Jane Austen’s Life and Legacy Exhibit Opens at the Morgan Library”