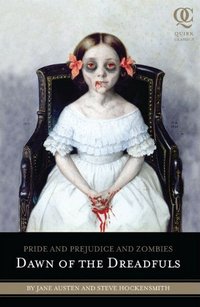 In this terrifying and hilarious prequel, we witness the genesis of the zombie plague in early-nineteenth century England. We watch Elizabeth Bennet evolve from a naïve young teenager into a savage slayer of the undead. We laugh as she begins her first clumsy training with nunchucks and katana swords and cry when her first blush with romance goes tragically awry. Written by acclaimed novelist (and Edgar Award nominee) Steve Hockensmith, Dawn of the Dreadfuls invites Austen fans to step back into Regency England, Land of the Undead!

Surprisingly, co-authors are listed as Jane Austen and Steve Hockensmith even though according to Quirk editor Jason Rekulak Dawn of the Dreadfuls is a “completely original novel inspired by Austen’s characters; — in other words, there’s not a drop of original Austen writing in it.” Obviously, since Jane Austen did not write a prequel to Pride and Prejudice there was no text to mash-up and this new novel needed to be an original story only lifting her characters names. We are, however, perplexed at her inclusion. Other authors have been writing prequels, sequels and retellings of Pride and Prejudice for years, but admittedly, this is the fist time this writer has seen the original author’s name attached with another author’s work.

In actuality, the lack of Jane Austen’s text is a win-win situation for both Austen and zombie fans who each had qualms about their peas touching their potatoes on the plate. Now only Austen’s name is being exploited and not her words.

Dawn on the Dreadfuls goes on sale in the US on the 24th of March, 2010. I liked P&P&Z, but this literary mash-up business was pushed way beyond amusing parody with Sense and Sensibility and Sea Monsters and unless this new novel is exceptionally well written, I’ve had enough of others ripping off my favorite author.