I know of few novels – except Pride and Prejudice – that inspire as much fierce lifelong affection in their readers as I Capture the Castle. – Joanna Trollope

This fall, UK audiences will be treated to a new adaptation of Jane Austen’s novel Emma, starring Romola Garai as the irrepressible handsome, clever and rich matchmaker of Highbury, Miss Emma Woodhouse. A joint BBC and PBS production, US audiences will have to wait until the winter of 2010 to enjoy the heroine that Austen jokingly warned her family “no-one but myself will much like.” We all love to hate Emma, at first, but fall for her in the end, just like her Mr. Knightley. I am quite pleased with the producers casting of Garai and fondly remember her excellent performance as one of my other beloved heroines, Cassandra Mortmain in the 2003 major film adaptation of one of my top ten favorite books (outside of Austen’s canon of course), I Capture the Castle.

I first read I Capture the Castle about ten years ago and was delighted with the story, characterizations, and Smith’s witty and adventuresome style. It had been highly recommended to me by a friend who knew I was an Anglophile and Jane Austen enthusiast. Like Jane Austen, author Dodie Smith has a passionate following of readers ready to promote her works. She beamed about the allusions to Austen and the story set in England of a young girl coming of age. I was intrigued. Published in 1948 in the US, the book was written as an antidote for her homesickness for her native England while she was living in the US with her husband. Amazingly, it was her first novel after being a successful playwright in England for several years. Most readers will identify with her popular children’s book 101 Dalmatians published in 1956 and adapted into the Disney animated movie in 1961. Who could ever forget her over-the-top characterization of villainess Cruella de Vil? – a whacked-out Lady Catherine de Bourgh with a fixation on a Dalmatian dog fur coat. 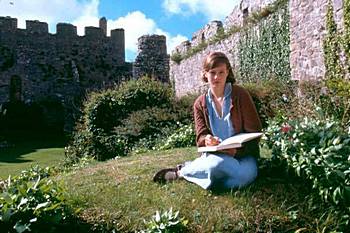 “But some characters in books are really real – Jane Austen’s are; and I know those five Bennet’s at the opening of Pride and Prejudice, simply waiting to raven the young men at Netherfield Park, are not giving one thought to the real facts of marriage.” pp 55

The story of I Capture the Castle is revealed through the eyes of its 17-year old heroine in the making Cassandra Mortmain, whose artistic and eccentric family is barely surviving in a crumbling castle in England. Her negligent father, bohemian step-mother Topaz, beautiful but shallow older sister Rose and precocious little brother Thomas are the center of her unconventional world that she is struggling to understand, and emerge from. The Mortmain’s are trapped in the run-down castle by a long-term lease originally obtained from the proceeds of her father’s first and only novel. Suffering from writers block, he has not written a word since, choosing instead to spend his time reading novels and avoiding his family. Seemingly living off air, the family has not paid their rent in years, and has long since sold the last of their belongings. An aspiring writer, Cassandra copes with her dire life by writing in her journal as catharsis, and an attempt to improve her skills as a ticket out of her circumstances.

‘I don’t intend to let myself become the kind of author who can only work in seclusion – after all, Jane Austen wrote in the sitting-room and merely covered up her work when a visitor called (though I bet she thought a thing or two) – but I am not quite Jane Austen yet and there are limits to what I can stand.’ Cassandra Mortmain pp 26

Her sister Rose will use other means to free herself from her parent’s neglect, hoping her beauty will snare a rich husband.  She laments woefully about their penurious condition and dreams about marrying a wealthy man until two arrive in the neighborhood in their new American landlord Simon Cotton and his brother Neil, fueling her fantasy to be a Jane Austen heroine.

“Did you think of anything when Miss Marcy said Scoatney Hall was being re-opened? I thought of the beginning of Pride and Prejudice – where Mrs. Bennet says ‘Netherfield Park is let at last.’ And then Mr. Bennet goes over to call on the rich new owner.”

“Father wouldn’t go anyway. How I wished I lived in a Jane Austen novel!”

I said I’d rather be Charlotte Bronte. Rose and Cassandra Mortmain pp 24

Even though she is repulsed by Simon, Rose sets her cap for him, and with Cassandra and Topaz’s help, she succeeds. Meanwhile, Cassandra is attracted to the other brother Neil and is hopeful for her own romance, much to the disappointment of Stephen, the Mortmain’s live-in friend who is infatuated with her. As the wedding plans proceed, Rose and Topaz travel to London to purchase her wedding trousseau. Rose’s vain and selfish nature blossoms with her new elevated social position and money. Cassandra, left out of the plans feels even more neglected and is thrown together with Simon who Rose is treating as an annoyance. As the two cast-offs are drawn together, romantic sparks ignite as they express their mutual attraction in a kiss. Rose on the other hand is drifting away from Simon and secretly into the arms of his brother Neil. An elopement will cause a family panic, a change of heart and an unusual ending.

On my first reading, I picked up on the allusions to Jane Austen throughout the novel. There are obvious ones: Cassandra and Rose can be compared to the two Bennet sisters whose family fortune and social position is impairing them from an advantageous marriage. Simon and Neil are two young unattached wealthy men that arrive in the neighborhood as possible suitors like Charles Bingley and Fitzwilliam Darcy. Rose is repulsed by Simon like Elizabeth is by Darcy. There is a negligent father, an eccentric mother, an elopement, and a pivital moment of truth by the heroine, but that is where any apparent resemblance ends. What really prompts the reader to reflect further on the similarities between Jane Austen’s works and I Capture the Castle is the language. Smith’s use of words, phrases, and rhythms is so subtly evocative of Austen that certain passages from the novel stirred my memory of what  Austen had also used. Here are several examples from I Capture the Castle with similar quotes from Austen.

“[T]here is something revolting about the way girls’ minds so often jump to marriage long before they jump to love.” Cassandra Mortmain,  pp 55

“A lady’s imagination is very rapid; it jumps from admiration to love, from love to matrimony, in a moment.” Mr. Darcy, Pride and Prejudice Ch 6

“Certain unique books seem to be without forerunners or successors as far as their authors are concerned. Even though they may profoundly influence the work of other writers, for their creator they’re complete, not leading anywhere.” Mr. Mortmain pp 59

‘[I]n short, only some work in which the greatest powers of the mind are displayed, in which the most thorough knowledge of human nature, the happiest delineation of its varieties, the liveliest effusions of wit and humour, are conveyed to the world in the best–chosen language.’ The Narrator, Northanger Abbey, Ch 5

“Still, looking through the old volumes was soothing, because thinking of the past made the present seem a little less real.” Cassandra Mortmain pp 233

“You must learn some of my philosophy. Think only of the past as its remembrance gives you pleasure.” Elizabeth Bennet, Pride and Prejudice, Ch 58

Cruel blows of fate call for extreme kindness in the family circle.” Pp 74

“[W]e must stem the tide of malice, and pour into the wounded bosoms of each other the balm of sisterly consolation.” Mary Bennet, Pride and Prejudice, Ch 47

“Our pleasures I this world are always to be paid for.” Henry Tilney, Northanger Abbey, Ch 26

“Contemplation seems to be about the only luxury that costs nothing.” Cassandra Mortmain, pp 25

“[T]o sit in the shade on a fine day, and look upon verdure, is the most perfect refreshment.” Fanny Price, Mansfield Park, Ch 9

“A large income is the best recipe for happiness I ever heard of.” Mary Crawford, Mansfield Park, Ch 22

The Austen allusions may have motivated me to read this novel, but that is not why it remains one of favorites. If I had to narrow it down to one reason, I would definitely say that it was Smith’s vivid and humorous characterizations. This motley cast of players runs the full gamut of human foibles and weakness that are both tragic and amusing. When an author connects with readers through perceptive observation played against dry wit, the results when skillfully combined, can resonate deeply filling our void to know and understand human nature and life.  It’s what makes for great literature, and what Austen is also valued for.

“Just to be in love seemed the most blissful luxury I had ever known. The thought came to me that perhaps it is the loving that counts, not the being loved in return — that perhaps true loving can never know anything but happiness. For a moment I felt that I had discovered a great truth.” Cassandra Mortmain  pp223

“I have courted prepossession and ignorance, and driven reason away, where either were concerned. Till this moment I never knew myself.” Elizabeth Bennet, Pride and Prejudice, Ch 36

Well done Dodie Smith. I recommend this novel highly. It is a perfect summer read.

13 thoughts on “Jane Austen Allusions in I Capture the Castle, by Dodie Smith”