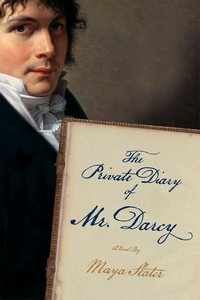 If Jane Austen thought that her novel Pride and Prejudice was too light, bright, and sparkling and wanted shade, then author Maya Slater has made up for any deficit by crossing over to the ‘dark side’ in writing her re-telling of the story entitled The Private Diary of Mr. Darcy. Not only are we privy to Fitzwilliam Darcy’s most intimate and revealing secrets, we see the story of Pride and Prejudice told wholly from the male perspective, and gentle readers, be prepared. It’s a man’s world in Regency England, and dare I say, Fitzy is no saint.

And so it was with a heavy heart that I cracked open yet another Darcy discourse ready to rip it to shreds like Lydia Bennet’s famous bonnet. The first few entries of the diary were pleasant enough. The language and style was respectful to Austen’s, the story line consistent with Darcy’s view, and the characters well thought out. A good beginning. My interest builds as I realize that I am reliving Pride and Prejudice from a new perspective, and told by an author who understands the novel, is well researched in Regency history and can turn a phrase quite neatly. Better and better. Whoa! Darcy has just admired a housemaid’s ‘pleasing embonpoint’, removed her starched white apron and tumbled her on his bed! The hairs on the back of my neck stand at attention. This is not the Darcy that we know from Elizabeth Bennet’s perspective, and the author has just made her point.

Uncertain if I could get past this bit, I trudge on. We follow Darcy to London with his faithful valet Peebles in tow. Their Jeeves and Wooster relationship is amusing. I smile. Darcy unknowingly crumples up his leather gloves in a coat pocket, scuffs his boots, and wants to wear the wrong clothes for the wrong occasion. It is of little consequence to this wealthy and overly confident man, but Peebles is beside himself. I laugh. In addition to Charles Bingley, we are introduced to Darcy’s friend, George Byron. Yes, the poet and notorious, mad, bad, and dangerous to know Byron. He lives up to his reputation and influences Darcy into dubious deeds that most Regency men of his position in society amuse themselves with like cards, drunken debacles, and escapades with women. At this point we are experiencing Darcy from a totally male point-of-view, but the transition into events that Austen would never have included in her heroine Elizabeth Bennet’s female world, are more acceptable because this author’s skill at making Darcy’s diary so believable and amusing is effortless. By the midway point in the diary, it has become a page turner, and I am totally captivated.

So how did author Maya Slater woo a Janeite who openly admits contempt for renovators who sex up or steal Austen’s good name? She actually did not have to. Once I abandoned my expectations of reading another sequel bent on ripping off Jane Austen’s stories or characters, I realized that this was not Elizabeth Bennet’s Pride and Prejudice, but Mr. Darcy’s, and Maya Slater was not renovating Jane or sexing up Lizzy but telling a man’s story. It made me laugh-out-loud repeatedly and revel in a love story that I read as freshly and intensely as the first time this writer experienced the original many years ago. That, gentle Austen readers, is quite an achievement. Even Mr. Darcy might consider Maya Slater worthy of inclusion in the “half a dozen women in the whole range of (his) acquaintance that are truly accomplished.”

(Previously published in the UK in 2007 as Mr. Darcy’s Diary)

24 thoughts on “The Private Diary of Mr. Darcy, A Novel by Maya Slater – A Review”

Since 2007, Austenprose has championed Jane Austen and her legacy by featuring information about her work, life, and times. Her enduring appeal and widespread influence are showcased here with reviews of the best historical novels, nonfiction books, British period dramas, and curated recommendation lists.